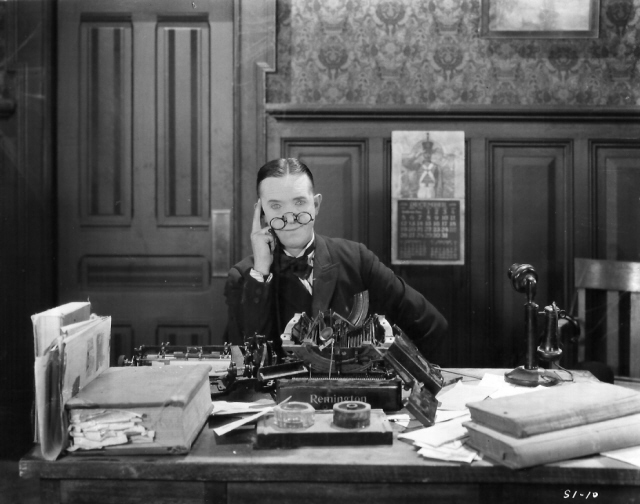 All of the films in the Project thus far have been two-reel shorts, which, a reel of film in the silent era being about ten minutes long, means they each run twenty minutes or less.  They were also made very quickly in a studio setting.  Maybe a month at most for the whole production.  This is how we're now eleven films into the series and have progressed in time fourteen months from July 1926 to early September 1927.  So, as you'd expect under these conditions, the films follow certain formulas and structures, and some gags get repeated in multiple films.  At the most basic level, the two-reel comedy short tended to be evenly split in half, with the setup in the first reel and the conclusion in the second, usually filmed at two different locations (often the second reel has two locations intercut).  Think of With Love and Hisses evenly divided between the train location of the first reel and the camp location of the second, or Love 'Em and Weep with the office location for the first reel and the intercut restaurant and home locations for the second.  This basic structure makes me think something is wrong with Sugar Daddies, or at least the version included in this DVD set.  The first reel is simply too short at less than seven minutes long, and as a result the film feels even slighter than it should.  This fact, plus some recycled jokes, make this the least satisfying film in the Project yet. 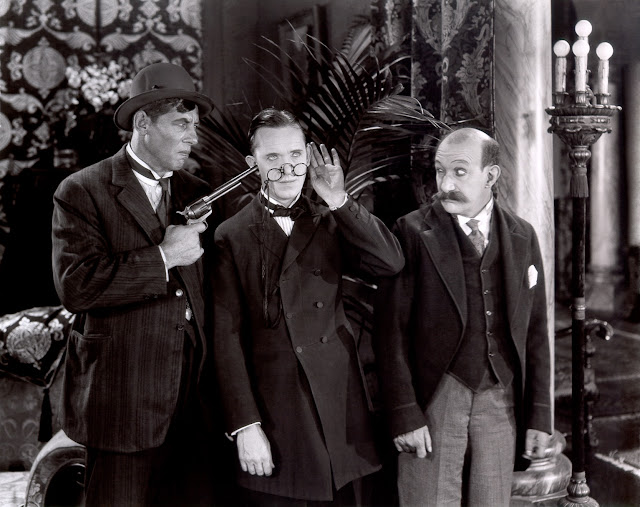 James Finlayson plays a millionaire drunk who accidentally gets married one night on a bender.  Oliver Hardy plays his butler (this isn't the first time Hardy's played a butler and I don't really get it, he doesn't seem right for that type of part at all to me).  The new wife turns out to be a grifter and her brother blackmails Finlayson.  The lawyer, Stan Laurel, is called in to help (this sequence has the best touch in the film: looking closely you can see that Laurel's office, specifically his telephone, is covered in cobwebs; it's that kind of attention to detail that leaks through even the worst films of great filmmakers.  The production still at the top shows the office without dust).  But abruptly, the reel ends here with the three heroes running away from the gun-toting brother and the second part starts with them hiding out at the sea shore.  The grifters discover their location thanks to a newspaper item about Finlayson and 27 chorus girls (interestingly, the rest of the newspaper is taken up with a story about Edward Muybridge, whose photographic experiments helped lay the foundation for motion picture technology).  When the bad guys show up at the hotel, we get an early version of what will become a Laurel & Hardy catchphrase: Laurel says to Hardy, "A fine mess you've made of things!"  What follows are some typical chase antics, including the "Laurel sits on Finlayson's back and they pretend to be a ridiculously tall woman" gag from Love 'Em and Weep, which is extended here far past the point where it's actually funny.

The second part of the chase (the second half of reel two) takes place at an amusement park funhouse, which has some fun bits in it but the location doesn't seem like its possibilities are being fully exploited.  Fifteen years later though, the cinematographer for Sugar Daddies would direct a film with a great funhouse sequence that shows it off at its surreal best.  That film, A Damsel in Distress, stars Fred Astaire, George Burns, Gracie Allen and Joan Fontaine and was directed by George Stevens.  Stevens also, of course, directed Gunga Din and Giant, both of which have screenplays credited to Fred Guiol, the director of Sugar Daddies and most of the early Laurel and Hardy films.  Guiol began as a prop man for Harold Lloyd in the late teens and was Oscar nominated for the Giant screenplay, his last film credit. 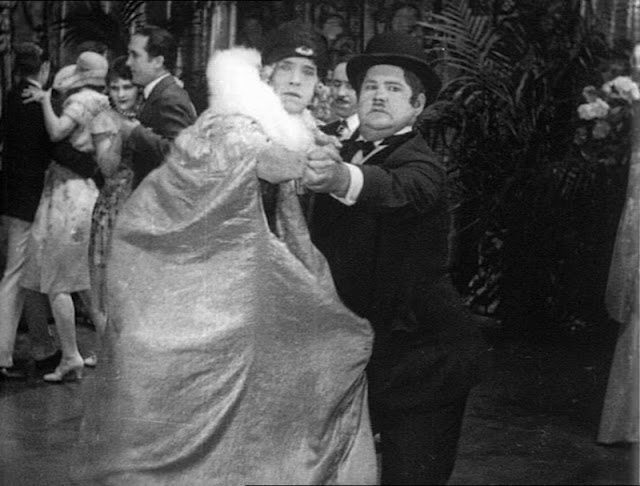