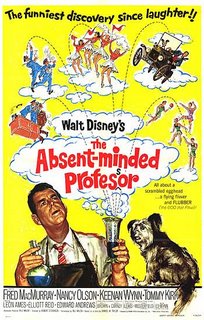 Look here for up to the minute lists for 1962-2006, now featuring explanations, disclaimers, methodologies and an ever expanding number of nifty pictures.

11. 101 Dalmations - Someone recently told me this was one of the best Disney movies. I don't believe they were sober. I guess you could say the animation is stylized, if 'ugly' is a style. It does have camp icon Joan Rivers for a villain, so that's something. Rod Taylor, the large piece of wood that played the male lead in The Birds, is one of the voices. Along with Tim Conway, known to my generation as comical pseudo-dwarf Dorf but who was apparently funny once.

10. The Absent-Minded Professor - Fred McMurray, a long way away from Double Indemnity, plays a scientist who invents a very bouncy rubber-like substance. He uses it to make his car fly and help the local high school basketball team win the big game. It's alright as live-action Disney family films from the 60s go, but that isn't very far.

9. The Parent Trap - Speaking of, here's another one, this time starring the great Hayley Mills in a dual-role as twin sisters who try to reunite their divorced parents, played by Brian Keith and Maureen O'Hara, Hayley Mills is at her most adorable here. She, of course, would go on to star in the first season of Saved By the Bell. The remake of this film, from a few years ago, has the distinction of having launched Lindsey Lohan's film career. 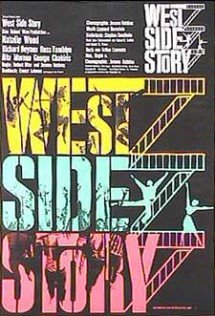 8. West Side Story - I'm not a fan of this kind of musical in general, I like the dance musicals of Fred Astaire and Gene Kelly over the big Broadway adaptations and Rodgers and Hammerstein films. This is about as good as it gets in the genre for me, and that's largely just because of Leonard Bernstein's score (the song lyrics are generally pretty bad), Rita Moreno's supporting performance and Robert Wise's very colorful and abstract directing (certainly better than the dull Sound Of Music). Jerome Robbins's choreography is too often unintentionally comical and Richard Beymer's a pretty lame leading man. I generally don't like musicals where the actors don't do their own singing, and while Natalie Wood's nice to look at, that ain't her singing.

7. The Guns Of Navaronne - All-star WW2 action movie that I really need to see again since the last time I watched it was probably over a decade ago. A select group of Allied commandos (David Niven, Anthony Quinn, Gregory Peck, Richard Harris, Stanley Baker and Irene Papas) have to sneak onto an island and blow up a massive Axis gun battery. Director J. Lee Thompson also directed the original Cape Fear, Taras Bulba, Conquest Of and Battle For The Planet Of the Apes, Death Wish 4, the Richard Chamberlin/Sharon Stone remake of King Solomon's Mines and the Lou Gosset Jr/Chuck Norris classic Firewalker. 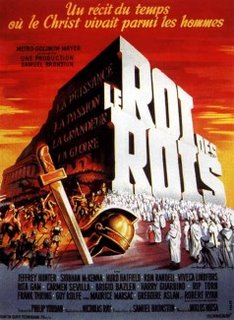 6. King Of Kings - I reviewed it in a fairly decent amount of detail here after watching this last Easter. We used to always watch The Ten Commandments every Easter, which is kind of weird. Yeah, The Ten Commandments is a good Passover film, and Passover ends right around Easter, but wouldn't you think Ben-Hur or King Of Kings is more appropriate for Easter night? Of course, when digital cinema has established itself and I can program my own films, every Easter we'll show a double feature of The Last Temptation Of Christ and The Life Of Brian. Maybe we'll play this one as the matinée. The Ten Commandments can play Friday night.

5. Judgement At Nuremburg - I said two things in the last day that this film is an exception to. First, it's a social problem picture that I like. Might even be my favorite of the genre (and directed by master of the genre Stanley Kramer). Second, it's got another Burt Lancaster performance that I like. He's on trial here, along with a group of other Nazis for war crimes. The tribunals are winding down and the Allies are left prosecuting things like judges who sentence people to be sterilized (Lancaster). The film's subject matter is, of course, unindictable (as you'd expect in this genre) and it doesn't really tell us anything we don't already know. But what the film does feature is a series of universally outstanding acting performances: from Spencer Tracy, Richard Widmark, Marlene Dietrich, and especially Judy Garland, Mongomery Clift and Maximillian Schell. Hell, even William Shatner's good in this movie. 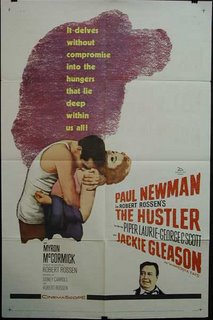 4. The Hustler - This film is much different from its late sequel, Martin Scorsese's The Color Of Money. This film, directed by Robert Rossen, is dark and moody with another classic anti-hero performance by Paul Newman. Newman plays Fast Eddie Felson, a young pool player hoping to unseat Minnesota Fats. The two play as the film opens, Felson loses and he spirals down from there. He ends up with his thumbs broken, an alcoholic, crippled girlfriend and a Mephistophelian manager, wherefrom he begins to work his way back for another shot at Fats. It's an atmospheric (read: slow) film highlighted by some great performances: Jackie Gleason as Minnesota Fats, Piper Laurie (the scary-evil mom from Carrie) as the girlfriend and George C. Scott as the manager. None other than Jake LaMotta himself plays a bartender in the film, very appropriately. 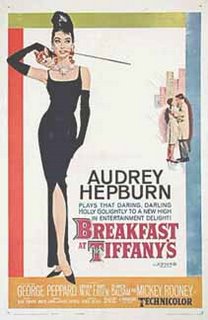 3. Breakfast At Tiffany's - This film, a loose adaptation of Truman Capote's novella is so close to being a perfect romantic comedy that it's just tragic that the mood has to be ruined by one of the most obviously racist caricatures you'll ever see in an extremely popular (still) mainstream film. If ever anything called for a director's cut to excise scenes, it's this film, wherein every instant of Mickey Rooney's idiotically cartoonish landlord begs to be eliminated and forgotten about. Other than that truly terrible blemish, however, the film is fantastic. Audrey Hepburn stars as flighty call-girl Holly Golightly, who becomes the object of infatuation for her neighbor, a writer played by George Peppard (from The A-Team). Peppard is a bit of a slut himself, being the kept man for a rich chick played by Patricia Neal. Hepburn's performance is brilliant, probably her at her most iconic. The score by Henry Mancini (featuring the song Moon River, which I understand was written specifically for Hepburn's limited singing range) is terrific and Blake Edwards's direction is solid and unobtrusive. 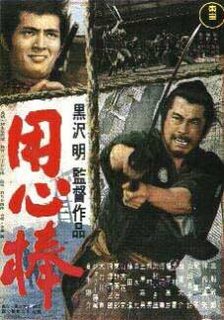 2. Yojimbo - Akiria Kurosawa is often accused of making samurai movies that feel more like Westerns than Japanese films (as if that's some kind of a crime), but with this biting satire of a samurai film he adapts Dashiell Hammet's very dark hard-boiled gangster novel Red Harvest into an apocalyptic Tokugawa-era setting. Toshiro Mifune plays a nameless ronin who wanders into a small village. The first thing he sees is a dog walking around with a severed hand in its mouth. It seems the town is torn in two by the warring gangs of the local saké merchant and brothel owner. Seeing that each gang is about equally deserving of contempt, Mifune plays the two against each other until pretty much everyone ends up dead. Tatsuya Nakadai stars as a creepy bad guy who carries a revolver. Sergio Leone ripped the film off to make his first Clint Eastwood film, A Fistful Of Dollars (#7, 1964) (and eventually had to pay Kurosawa some kind of settlement). While Leone's film borrows the plot of Yojimbo, it wasn't until Eastwood's own High Plains Drifter (#8, 1973) that a western managed to capture both the humor and the truly evil world at the heart of Kurosawa's film. 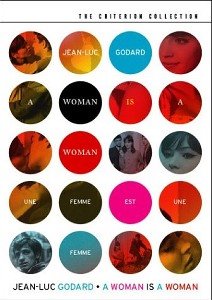 1. A Woman Is A Woman - I wrote about this terrific Jean-Luc Godard "neo-realist musical" here. The incomparable Anna Karina stars as a part-time stripper who decides she wants to have a baby. Her boyfriend (Jean-Claude Brialy) says he doesn't want to and suggests she enlist the help of their mutual friend (Jean-Paul Belmondo), which she does, maybe. The film is full of fun Godardian allusions to other films and filmmakers (two of Truffaut's films get a mention, along with his own Breathless and director Ernst Lubitsch and singer/actor Charles Aznavour). There's not really any singing in the film, but the score, by the great Michel Legrand (The Jacques Demy musicals, many other Godard films), repeatedly punctuates the dialouge as if it were a musical (or a cartoon). The soundtrack appears to all be in Karina's head, it seems to come and go on a whim and reflect everything she happens to be thinking or feeling. As an ode to the charming unpredictability of women, it's thoroughly entertaining, with great performances, beautiful, hip and fun directing by Godard and a very clever script full of terrible puns (which, I warn you, are funnier and make more sense in French than in the subtitle translation). I've seen it three or four times in the last few months, and it only gets more charming. Finally got the wife to watch it last night. I don't think she liked it though. She said it was "very French." Chicks. . . sigh.

Some very fine Unseen movies this year, including an Alain Resnais film I've wanted to see for years but isn't readily available on this continent, a Buñuel Criterion released a couple months ago, along with films by Bergman, Antonioni, Fuller, Ozu, Demy, Wilder, Huston and Brando. 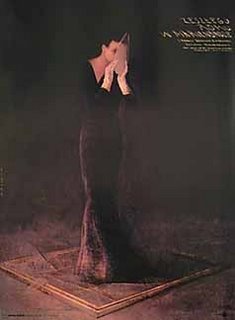