The 80s kick off with the best year yet.

15. American Gigolo - How did Paul Schrader go from Taxi Driver to this? What a freak. Richard Gere still isn't awful, but he's well on his way.

14. Breaker Morant - I've got to rate this movie this low because I don't remember too much about it. It's a Paths Of Glory-esque war movie set in Australia, starring Bryan Brown, from Cocktail, among others. I do recall thinking it was very good. I should see it again. 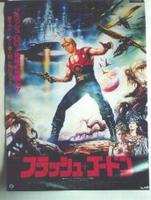 13. Flash Gordon - One of the few A sci-fi films to follow in the tradition of the great Barbarellla, only without all the sex. By the director of Croupier and the original Get Carter. I wonder if people understand that it's camp is intentional. . . .how could it not be? Max Von Sydow, Tomothy Dalton and Brian Blessed are the famous people. The girl who plays Dale Arden went on to star in the TV series 'Manimal'.

12. The Gods Must Be Crazy - One of those movies my family is obsessed with. Surprisingly, other people seem to like it too. It's a very strange movie, I don't know that there's been any American film quite like it since World War II. Just a straight forward slapstick comedy, mixed with dry British humor. I could be wrong, but I think this is only only movie by a South African director I've ever seen.

11. Superman II - I've actually seen this more often than the fist one, and I always liked it better as a kid. But I haven't seen either in years and years. Terrence Stamp gives an iconic performance as General Zod. Gene Hackman is still inexplicably in a Superman movie. The Fortress Of Solitude is awesome. Directed by Richard Lester, the guy who directed A Hard Day's Night, Help! and the richard Chamberlin version of The Three Musketeers.

10. Stardust Memories - One of Woody Allen's strangest films, it doesn't quite work, but is still pretty interesting. It is to Fellini what Interiors was to Bergman, and it's much more successful than that other film. A great performance by Charlotte Rampling.

9. Ordinary People - I feel bad rating this so low, but every film in the top 8 this year is a indisputable classic. Tremendous acting all around here, as Timothy Hutton, Donald Sutherland and Mary Tyler Moore are all award worthy. It's the first film Robert Redford directed, and he'd get a lot better at it as time went on. The direction here mainly serves to highlight the terrific performances. A profoundly depressing movie.

8. The Big Red One - Samuel Fuller's autobiographical masterpiece follows five guys through the course of World War II, based on his own experiences there. It's the movie Saving Private Ryan wants you to think it is. A really great war movie, dragged down by some poor non-Lee Marvin performances, notably the woefully inadequate Mark Hamill.

7. Kagemusha - Though it is largely overshadowed by and seen as merely a test-run for Ran, this is still a terrific movie. One of the most static films Kurosawa ever made, there are long stretches where the camera never moves. I wonder how influential these two films were on the Chinese films of the 90s. Seems to me Zhang Yimou and Chen Kaige are also notable for very composed, colorful, static shots. Tough to say, after all, it isn't like Kurosawa invented this style, though he does it exceptionally well. Tatsuya Nakadai gives a terrific performance, though Toshiro Mifune probably would have been better. If you ever played Nobunaga's Ambition on the Nintendo, this movie's for you.

6. The Blues Brothers - Great music, great car chases, Carrie Fisher with many many guns, nuns, rednecks, Nazis, this movie has it all. John Belushi gives his best performance. Not only the best musical of the 80s, but the best car chase movie of all-time.

4. Caddyshack - One of the most quotable movies ever, 25 years later it's still hilarious. Chevy Chase and Rodney Dangerfield get all the best lines. The nobodies who played the caddies could have really dragged the movie down, as it is they're unremarkable, which is great because it allows the comic geniuses (Dangerfield, Chase, Murray and the guys who wrote the script: Harold Ramis, Brian Doyle-Murray and Dougls Kenney) to be the real stars of the movie. And the gopher. the gopher's alright too. In contention for greatest comedy ever.

3. Raging Bull - A great looking movie, but it's never grabbed me the way it seemingly has so many others. Jake LaMotta just isn't sympathetic enough for me to become very concerned with his downfall. Don't get me wrong, I don't think Scorsese expects us to feel sorry for him, it's just that tragedies with wholly unsympathetic heroes aren't particularly interesting. The Age Of Innocence has the same problem. It is also an amazing looking film that is nonetheless relentlessly dull. Perhaps I'm missing something. . . .Anyway, still the best boxing movie ever.

2. Airplane! - Wow, was 1980 a great year for comedies or what? Do not let the string of god awful early 90s parody movies prejudice you: the original is a nearly perfect comedy. A worthy inheritor of the Marx Brothers tradition of putting the jokes first, and the plot 512th or so. A relentless barrage of jokes, the film never slows down and remains consistently rewatchable as a result: every time you see it, you catch another joke you'd never noticed before. career altering performance by Lloyd Bridges, Leslie Nielson and Robert Stack are the acting highlights, along with a classic cameo by June Cleaver. My pick for the funniest movie of all-time.

1. The Empire Strikes Back - The Out Of The Past podcast for this week is on Blade Runner, and in the course of the conversation about noir influence in sci-fi, one of the profs mentions that one of the main reasons people think Empire is the best Star Wars film is because of the noirish dialogue Lawrence Kasdan and Leigh Brackett brought to the screenplay. Its a great point, I'd never though of it before, but it makes total sense. its not just the events of the film that make it seem so dark (though they are dark), it's the script. Being called the best written Star Wars film is about like being the best utility infielder for the Kansas City Royals, but still, Empire is a tremendously well-written action movie. Added to that great screenplay is the very good direction by Irvin Kershner, every bit as good as Lucas's in the first movie (which I think was very good as well). There's a neat twist at the end, too, but I promise I won't give anything away.


Some decent movies in the unseen list for this year, though I doubt any would finish above #9: