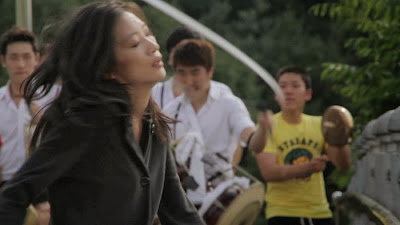 This year at VIFF I'm going to attempt to see all the films in competition for the Dragons & Tigers Award for Young Cinema, an award previously won by such future luminaries as Jia Zhangke, Hong Sangsoo, Koreeda Hirokazu, Lee Changdong, Liu Jiayin and Wisit Sasanatieng. The first film up is this one by Korean director Kim Soohyun, a portrait of actress Kim Sanghyun (who gives a remarkable performance, one that fully earns every word of the title), famous throughout Korea for her video game voiceover work. Opening in a swirl of inexplicable action, Kim stealing a drink from a coffee stand, muttering incoherently and wandering crazily throughout the city, the film quickly settles into a documentary-style rhythm as she talks about her work, her difficulty dealing with her employers and conducts a long audition interview with a director, Park Heeson, who wants her to star in an adaptation of Bertolt Brecht's play The Good Person of Szechuan. The play becomes the structuring metaphor for the film we're watching. In it, Shan Te, a kind-hearted woman that everyone in town takes advantage of, invents a split, evil personality for herself but is then betrayed by the man she can't help but love. Intercut through the interview is a production of the play (perhaps a memory of the version Kim herself starred in while in college), actors performing on a black stage, often just Kim and a Greek-style chorus. Shan Te's experience is directly correlated to the experience of the actress ("when I started getting recognized, people started bothering me, as if they wanted to live their lives through me") and Park describes this as a kind of prostitution and compares it to Kim's own work, where she must act as the director demands, changing her natural voice (more gender-neutral and authoritative than the stereotypical woman's voice, neither "warm and nurturing" or "sexy and girlish") to suit the whims of her boss/client.

The scene then shifts to a production, where Park is directing Kim in voiceover and acts in exactly the callous exploitive manner they discussed (eventually even the lines are the same). This then cuts to a continuation of the story that opened the film, Kim as madwoman, wandering the streets unable to communicate and settling on a bridge, where she apparently contemplates jumping. But then, a coffee shop worker comes along and begins playing a drum. he's quickly joined by other boys playing percussion in a joyous take-off on a kind of exorcism ceremony (based on an actual folk ceremony, the real one would not be performed by men, according to Tony Rayns at the Q & A), inciting Kim to dance and twirling, twirling, twirling towards freedom. The final shot is a close up of Kim's face on a beach, waves crashing behind her. Calm and indomitable, alone above a raging sea.
Posted by Sean Gilman at 12:04 PM