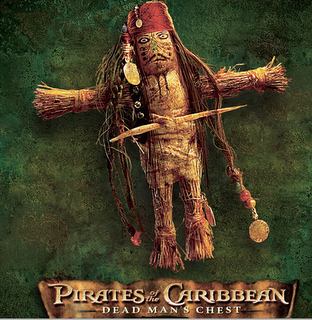 Trying a martini with gin in it. I've never been much of a gin fan, and I think I'll end up sticking with vodka. It's not bad, mind you, it's just all the herb flavor is a little weird for my taste, can't really taste the olive, you know.

Pirates Of the Caribbean: Dead Man's Chest - Yeah, I think it's the best movie of the year so far. There's a whole lot of fun swashbuckling action, some really great special effects (Davy Jones and The Kraken especially), some well-designed action sequences, with a nice Looney Tunes style as well as some complex action visuals with lots of things going on in multiple planes of a frame-full of happenings. There's also some pregnancy to the relationship of Keira Knightley and Johnny Depp's characters and there relationship to The Feminine (see this post from AICN, as quoted at MovieCityNews, which does contain SPOILERS:

what this movie is really about
by Muki July 7th, 2006
06:01:18 PM CST
What this film is really all about is the power of the feminine. Not to go all 'film student essay' on you but here are just a few examples of what I mean: The very first shot of the movie shows Elizabeth slouched in the rain, thoroughly pissed off that her wedding day has been ruined. This opening scene sets the tone for the rest of the movie which is to say hell hath no fury like a woman scorned. Elizabeth manipulates Beckett into giving her the warrant on Jack Sparrow - threatening him with a 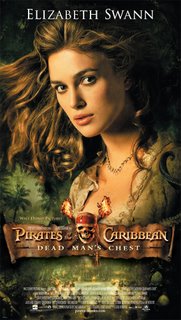 pistol (read: phallus). She succeeds in this where her father failed. In the same scene, Elizabeth complains about being deprived of her wedding night and allusions are made to her being a virgin. Again, hell hath no fury like a woman scorned – or in this case deprived of her mate and the opportunity to reproduce. Elizabeth not only gets to dress like a man in this movie but is also given not one but two swords (read: phallus) Elizabeth is able to manipulate the crew of the Edinburgh by using her wedding dress to represent a ghost. She plays upon the fears of the sailors who believe any ship with a woman on board is cursed. Her gender gives her power over them. Elizabeth uses her sexuality to essentially trick Captain Jack Sparrow and seal his fate at the hands...er tentacles of the Kraken. Captain Jack Sparrow basically gets consumed by a giant vagina with huge sharp teeth. He swings his phallic shaped sword in defence but it is completely inadequate against it - how very Freudian. It is a woman (Tia Dalma) who suggests a way of bringing Captain Jack Sparrow back from the dead and she also reveals the return of Barbossa - essentially illustrating the power of women as the givers of life. When he ultimately returns at the end of the movie, Barbossa eats an apple - conjuring allusions to Eve in the garden of Eden and woman's defiance of man. Just my thoughts...

I wasn't a big fan of the first movie, but I've seen this one twice since Thursday night. There's less superfluous talking and more action and this being a sequel, there's less need to develop the characters through dialogue and tedious exposition. Instead, we get to see the interplay of archetypes in comic-action motion, which is just fine with me. There's a reason this film is setting box office records left and right (we sold out every evening show last night, which is unheard of for a Monday at my theatre). Unlike the depressing "dramatic" action films we've been plagued with this year (M:I 3 I'm looking at you) this film is actually fun, and there's something that every demographic or intellectual level can find to enjoy in it. It's the Kung Fu Hustle of this year and that ended up my #3 film for 2004.
Posted by Sean Gilman at 5:14 PM 3 comments: 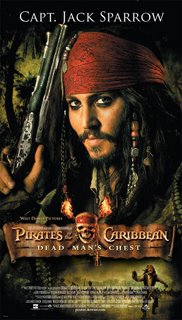 It's about time for a list of the best films of the year so far. Cinecast did it a couple weeks ago, and Ebert and Dumbass did it last week (get well Roger!). Most of these films I've already written about here on TINAB (you can find them using the search box at the top of the page (is that new?), the ones I haven't will be featured in future installments of the Movie Roundup. This is just a list.

By the way, I'm using the imdb dates for films, so there's a number of movies that were widely released for the first time in 2006 that are on my 2005 list and won't be listed here. Some of those are: Dave Chappelle's Block Party, Brick, Thank You For Smoking, V For Vendetta and Tristram Shandy.

By the way, it's not #1 simply because random people insist on telling me I look like Johnny Depp, though that is all too true. It really is a great film, a classic swashbuckler in the vein of Indiana Jones And the Temple Of Doom or The Adventures Of Robin Hood. 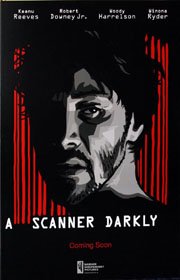 The Unseen movies list for this year is pretty good already, even without The Proposition, a 2005 film:

A Scanner Darkly
A Prairie Home Companion
Superman Returns
Day Watch
Akeelah And The Bee
Art School Confidential
The Sentinel
The Omen
Poseidon
Over The Hedge
An Inconvenient Truth
American Dreamz
Posted by Sean Gilman at 4:39 PM No comments: