Running Out of Karma: Royal Warriors 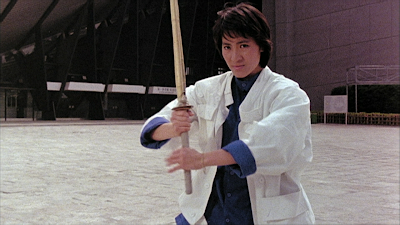 I'm a little unclear on whether or not this 1986 film is In the Line of Duty or In the Line of Duty 2. Wikipedia says it's the second one, after 1985's Yes, Madam!, imdb says it's the first and uses "In the Line of Duty" as its official title. As I understand it, the earlier film was released abroad only after this one, and they were retitled to match, with Yes, Madam! becoming the "sequel" In the Line of Duty 2 (or Ultra Force 2 or Police Assassins 2, depending on territory). Why it would be called "Royal Warriors", which is apparently its original Cantonese title, is beyond me, as the film has nothing to do with royalty and "warriors" implies a more ancient setting. Setting right the universe, I guess, is the next film in the series, alternately known as In the Line of Duty 3 and Yes, Madam 2, which stars Cynthia Khan, whose name is a totally synthetic combination of the names of the stars of the first two films, Cynthia Rothrock and Michelle Khan (as Michelle Yeoh was known at the time). 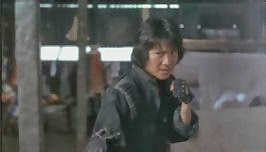 Anyway, Michelle Yeoh plays a cop (named Michelle of course, one of my favorite little things about Hong Kong cinema is how often character names are simply the actors' names: it helps establish stars and no one has to waste precious screenwriting minutes coming up with fake names for the characters) who with the help of an air marshal (Michael Wong) and a retiring Japanese cop (Hiroyuki Sanada, who has been in a lot of things, including Lost, Sunshine, Speed Racer and the latest Wolverine movie) foil an airplane hijacking. The three then become the revenge targets for the surviving members of the gang that perpetrated the hijacking. A gang of unspecified criminal activity but which comes with a vague Vietnam War backstory about brotherhood and honor. The film is absolutely brutal, as the gang goes full Big Heat on Sanada and a guy with a mustache and an Uzi kills a massive amount of bystanders while shooting up a bar called California (apparently the did a big remodel before reopening for Chungking Express), a scene which features almost as much shattered glass as the famed climax of Jackie Chan's Police Story, but with giant neon Tic-Tac-Toe signs thrown in. 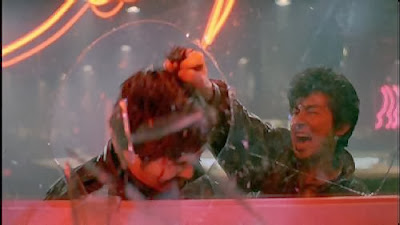 The plot is only barely coherent (easy to follow, but makes less sense the more you think about it), and unlike Yes, Madam! or Righting Wrongs or Police Story, the film is lacking that extra layer of thematic depth, that something beyond the visceral thrill of the action sequences. (I wouldn't say depth is necessary for a film to be good, but it certainly doesn't hurt). The film nods to Dirty Harry-style vigilantism and the ways women are underestimated and demeaned in the workforce, but only barely. We do get a great "hand in your badge and gun, you're off the case!" scene. Small character touches help, like Yeoh's barely contained annoyance at Wong's constant flirting, or how Sanada is always getting half-buried by things. But the real draw is the action, of course, and the hand-to-hand fight scenes and car chases are incredible, fast and powerful, mixing Yeoh's elegant ballet dancer form with bone-crunching kung fu (seriously: she appears to take a Jackie Chan-level beating in several scenes). And she drives a homemade tank. 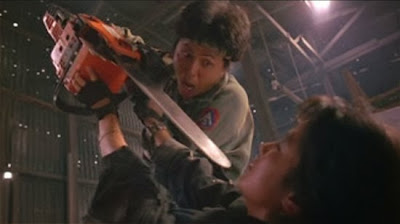 The film was directed by David Chung, a follow-up to his magnificently titled 1985 film It's a Drink, It's a Bomb!, an early Maggie Cheung film produced by Sammo Hung which I now have to see. Chung worked more as a cinematographer than director, with as impressive a list of credits as anyone in the 1980s-early 90s: Dangerous Encounters - First Kind, Boat People, Nomad, An Autumn's Tale, My Heart is that Eternal Rose, God of Gamblers, Once Upon a Time in China). His next film as a director was Magnificent Warriors aka Dynamite Fighters aka Yes, Madam 3, starring Michelle Yeoh and which apparently, like Royal Warriors, had second unit direction by Johnnie To.
Posted by Sean Gilman at 10:27 AM No comments: