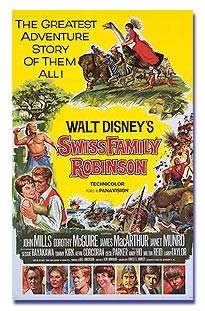 16. Pollyanna - Ah the horror of a youth dominated by the Disney channel. Hayley Mills plays a very happy girl who uses the power of positive thinking to crush her stodgy enemies in small-town America. It is indeed as horrifying as it sounds. Also stars Jane Wyman, Karl Malden and Agnes Moorehead, of all people.

15. Swiss Family Robinson - Robinson Crusoe Disneyfied and given a massive nuclear family of wacky kinds who love hijinks like racing ostriches and blowing up pirates. The pirate chief is played by Sessue Hayakawa, who played the prison camp commander in The Bridge On The River Kwai and whose film career goes back to 1914, when he was one of the first Asian-American film stars (he was the star of Cecil B. DeMille's hit The Cheat). The director, Ken Annakin, also directed the 1975 David Niven-Toshiro Mifune film Paper Tiger, and for some reason imdb claim's George Lucas named Darth Vader after him, but I don't think I believe it.

14. Exodus - This Otto Preminger epic stars Paul Newman as one of a group of Jews who flee Europe to Palestine after World War 2 and get attacked when they declare themselves the state of Israel. I haven't seen this since I was a kid, but I remember it being very long, but with some exciting action sequences, and it succeeded in relating the basic facts of the time period. Also stars Eva Marie Saint, Ralph Richardson, Sal Mineo, Peter Lawford and Lee J. Cobb. The screenplay's by Dalton Trumbo, the blacklisted writer who also wrote Roman Holiday and Spartacus. 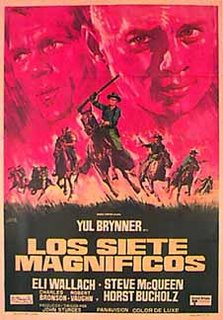 13. The Magnificent Seven - John Sturges's cheesy and vastly inferior remake of Akira Kurosawa's The Seven Samurai. The cast is great, as well as the score (very catchy) and the action sequences, but transplanted out of the social context of feudal Japan, the story loses any resonance or meaning beyond simple action. Yul Brenner, Eli Wallach, Steve McQueen, James Coburn, Charles Bronson and Robert Vaughn star.

12. Inherit The Wind - This straightforward adaptation of the play about the Scopes Monkey Trial (It's very thinly veiled), gets the good performances you'd expect out of Spencer Tracy and Fredric March, but director Stanley Kramer doesn't really bring anything interesting to the film (not unprecedented in Kramer's career). The trials interestng though, and those performances are really good. Also stars Gene Kelly, Dick York, Henry Morgan and Norman Fell. 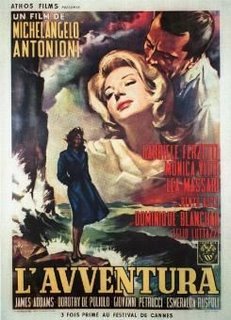 11. L'Avventura - A group of swells have a party on a deserted island, from which one girl just disappears. Her friend and boyfriend search the island for her. Suspecting she caught a boat back to the mainland, they head off to town to look for her, where they forget about her because they're too busy doing each other. It's very slow, beautiful, and depressing, chock full of good old existential angst and the ennui of the rich. As yet it's the only Michelangelo Antonioni film I've seen, but I really need to rewatch it and check out more of his work.

10. Tunes Of Glory - This stagey film is notable for a great performance from Alec Guiness (despite the overthetop accent). Guiness plays the leader of a Scottish regiment who gets passed over for promotion and does what he can to subvert the new commanding officer, John Mills (who was also in Swiss Family Robinson). IMDB claims James Kennaway adapted the screenplay from his own novel, which surprises me because I would have sworn this film was simply transplated straight from the stage. Directed by Ronald Neame, who was a cinematogropher (In Which We Serve, One Of Our Aircraft Is Missing) and went on to direct The Poseidon Adventure.

9. Ocean's Eleven - As far as I can tell, the best of the Brat Pack films. Frank Sinatra leads a gang of hipsters as the ripoff five Vegas casinos in one night. The heist sequence itself is exciting and suspenseful, and the maybe to long buildup to it has some fun martini-drenched humor and songs. The fun-having cast includes Dean Martin, Sammy Davis Jr, Peter Lawford, Angie Dickenson, Shirley MacLaine, Cesar Romero, Joey Bishop, Richad Conte, George Raft, Red Skelton and Akim Tamiroff. Directed by Lewis Milestone (All Quiet On The Western Front). I understand the Soderberg remake changed the ending, which makes me never want to watch that travesty. 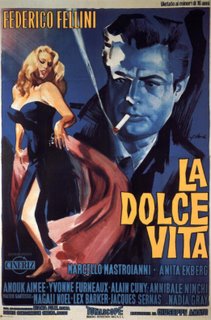 8. La Dolce Vita - Federico Fellini's epic of urban hipster dissipation stars Marcello Mastrionni as a paparazzi bored with his fake life of parties and glamour and his troubles with women and his father. The famous opening shot of a statue of Jesus flying over the city is very cool, and some of the sequences are very interesting, but frankly I just got bored with the film after awhile. That may be intentional, getting us to empathize with the main character's boredom or something, I don't know, I probably need to see it again, as it's been about 10 years. Also stars Anita Eckberg and Anouk Aimée.

7. The Apartment - I've never understood the worship this very fine Billy Wilder film seems to evoke in so many people. It's good, but it's not that good. Jack Lemmon plays a loser accountant who lets his bosses (Fred MacMurray, Ray Walston, etc) use his apartment so they can hook up with their mistresses. When Lemmon falls for one of MacMurray's girls, the suicidal Shirley MacLaine, he tries to quit being a loser to bittersweet comical effect. It can't think of any real flaw the film has, it just doesn't inspire the passion in me that it seems to in others. I wonder how much its many Best Picture wins had to do with the prior year's Some Like It Hot. . . . 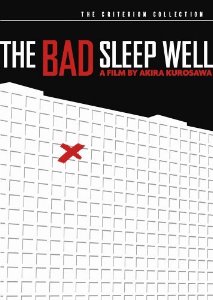 6. The Bad Sleep Well - Akira Kurosawa loosely adapts Hamlet to a contemporary Japanese business world. After Toshiro Mifune's father kills himself by jumping out a window in his company's headquarters, Mifune sets out to expose the corruption and murder at the heart of the corporation. One of Kurosawa's most slowly paced films, the plot is a convolution of betrayals and villainies, told deliberately in high-contrast black and white. The tremendous cast features Takeshi Shimura, Masayuki Mori, Chishu Ryu, Susumu Fujita, Ko Nishimura, Takeshi Kato and Kamatari Fujiwara.

5. Peeping Tom - Oner of the first great serial killer films, and also a very dark satire on the nature of film directing and viewing. Michael Powell's late masterpiece stars Carl Boehm as an assistant camera operator who moonlights as an underground pinup photographer who also happens to be a murderer with some serious issues with his father, a psychologist who used his son in his experiments on the nature of fear. The great Moira Shearer (The Red Shoes) plays one of his victims in the best sequence in the film, a photo shoot in the film studio that everyone but the poor girl knows is going to end badly for her. Suspenseful and endlessly useful as fodder for grad student essays.

4. Spartacus - This classic of Hollywood's obsession with films set in Ancient Rome started as an Anthony Mann film and ended up directed by Stanley Kubrick and feels like a weird combination of those two very different directors and screenwriter Dalton Trumbo. This muddles the directorial aspects of the film and allows the truly great thing about it to take over, and that's the performances, especially by Charles Laughton and Laurence Olivier. Peter Ustinov and Tony Curtis (oyster fan) and Jean Simmons also star. Kirk Douglas, as Spartacus, is occasionally very good,, but really I think is the weak link of the entire film. Still, it's probably the best of this cycle of films.

3. Breathless - Jean-Luc Godard's first full-length film is a simple story of a wanna-be gangster who steals a car, finds he's shot a policeman and tries to get an American girl to go on the lam with him. The middle third of the film is a long, poetic, pretentious, confusing series of conversations between the thief (Jean-Paul Belmondo) and the girl (Jean Seberg). The rumor is that Godard asked director Jean-Pierre Melville (Le Samourai, Army Of Shadows) for advice when cutting the film and he told him to cut out the boring parts, the result is the jump-cutting that the film is famous for. I don't think I believe that. This is Godard being Godard right from the start: taking the whole history of cinema, chewing it up and spitting it back out in a form wholly new and yet totally recognizable. It's as good a place to start with Godard as any. 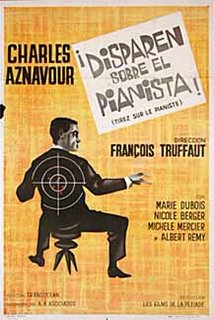 2. Shoot The Piano Player - Speaking of the French New Wave, here's François Trufffaut's second film, and my favorite of his. It's a film noir, more or less that doesn't exactly deconstruct the genre but rather plays with its conventions as a sideline instead of as the main focus of the film (in the manner of Scorsese's Mean Streets as opposed to the Coens Big Lebowski). Charles Aznavour (the feature artist in Godard's A Woman Is A Woman) plays a former great pianist slumming in the wake of his wife's suicide. He's brother shows up on the run from gangsters and drags him and the waitress who's sweet on him into a noir adventure filled with shootouts, kidnappings and snow. A beautiful, funny and tragic film, it's my favorite Truffaut.

1. Psycho - Perhaps the most famous of all Hitchcock films, and one of the 4 or 5 films that alternate as my favorite Hitchcocks. Anthony Perkins is brilliant as the hotelier with mommy issues who interrupts Janet Leigh's shower. A profoundly weird film, it can be experienced any number of ways: Freudian satire, straight comedy, lurid serial killer pot-boiler, slasher-film archetype. It's all of those things and more. 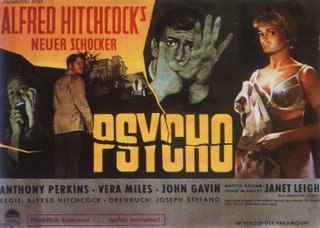 It's often said that the speech at the end of the film, the one where the psychiatrist explains what and why Norman has done is either pointless, really badly acted and/or idiotic, but I don't know why. I can't say it's ever bothered me. Hitchcock explains things, the only time I can think of him leaving the central mystery of the film a mystery is in The Birds. Every other film ends with an explanatory resolution. It works great in The Birds, of course, and maybe it'd work here too. But I'm generally skeptical of films that leave out their resolutions. they tend to do it because they can't think of an intelligent way to end their film, or to make the film seem more profound than it really is (see Michael Haneke's Caché or any number of American indie films). Anyway, Psycho's one of the first great classic films I ever saw, and it's still one of my favorite, probably in my top 40 or 50 films of all-time.


A lot of Unseen movies this year as I've gone ahead and added any films Jonathon Rosenbaum included in his top 1000 that I haven't seen, which I'll be doing for the rest of the Movies Of The Year lists. 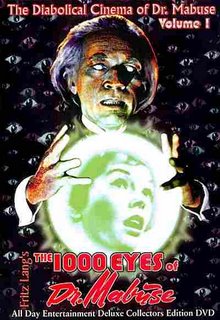