Been real busy with my fast-paced and exciting life here. Still seething from the New Orleans debacle, and even more, from the apparent willingness of so many people to ignore the obvious about the federal government's reaction to it. argh.

Been listening to more Bach. The Brandenburg Concertos, Toccata and Fugue and now the St. Matthew Passion. It took forever to pick a version of the Passion to buy. I finally settled on the (old, loud) Otto Klemperer one over the (modern, period authentic instruments) John Eliot Gardiner. I've already got a Klemperer version of Beethoven's Eroica that I like. Apparently he's wacky and crazy as far as classical conductors go, not that I can tell the difference or anything. I dig it so far.

In movie news, I still haven't been able to see The Constant Gardner or The 40 Year Old Virgin, though both have gotten great reviews. I've been reading John LeCarré novels off and on for the last couple of years. But I've been going in order so I haven't gotten to this one yet, nor am I likely to anytime in the foreseeable future. So I guess I'm just going to have to watch the movie first. Ah well. It's by the director of City of God, which I loved (like everyone else who's seen it, apparently). 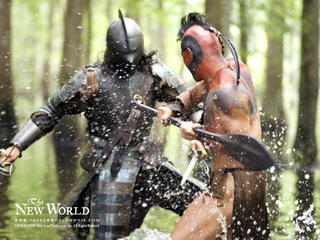 Looks like lots of good movies are starting to finally come out. Scorsese's Dylan documentary played the Toronto Film Festival to rave reviews. The Johnny Cash bio-pic Walk The Line looks real good. Ang Lee's made a movie about gay cowboys. Atom Egoyan's got a new movie that failed to get an R rating. Polanski's done Oliver Twist. David Cronenberg's A History of Violence is supposed to be his best movie, and from the trailer, looks really good. Spielberg's got a movie on the terrorism at the Munich Olympics (lends credibility to the "War of the Worlds as 9/11 allegory" theory, I think), a feature length Wallace and Grommit movie. Peter Jackson's remade) King Kong (surprisingly the trailer looked really cool, not a Lange in sight). New movies from Curtis Hanson and Cameron Crowe. And, finally, the one I'm most excited to see, a new Terrence Malick movie, The New World, about Pocahontas, John Smith and Jamestown. The trailer looks amazing. 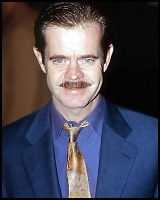 I have managed to watch a couple of David Mamet movies:

Oleanna is an old one, based on one of his earliest plays. William H. Macy plays a professor who doesn't really do anything wrong, but gets royally screwed over anyway by a truly evil and insidious character: a militantly politically-correct moron. Amazingly prescient, it's still worth seeing and arguing about. He does not, unfortunately, have this awesome mustache.

Spartan is a run of the mill spy movie with Val Kilmer playing, essentially, Jack Bauer. Only without the whole clock-ticking thing. It's entertaining enough, very well-done and professional, but there isn't really anything interesting here. William H. Macy is also in this movie, also without this awesome mustache.


In TV news, we watched the first episode of Rome, the new HBO series, but haven't gotten around to the second one yet. It's gotta be better than the dreadful Empire that ABC spat out earlier this summer. The second season of Entourage just ended. It wasn't as good as the first season, but still a terrific show. All the cool kids are watching it, doncha know? Oh, and the season premiere of the OC was tonight. Maybe I'll get to watch it sometime this weekend. . . .


Anyway, that's it for the update. I'm gonna get back to the Movies Of The Year lists fairly soon. I know there are countless clamoring masses waiting to see just where Blade Runner ends up. . .
Posted by Sean Gilman at 3:26 AM 3 comments:

1981 isn't quite as good at the top as some of the previous years, but is the deepest year so far, as I've seen a whopping 25 movies from this year. But since I'm trying to keep these at a reasonable length, I'm only going to write about the top 15.

15. Body Heat - I like Lawrence Kasdan, and I love film noir, but I'm not a big fan of this movie. Perhaps if I hadn't seen so many real noirs before seeing this, I'd feel differently. But too late for that now. That's the problem with making a classical genre film 25 years after the genre played itself out: it's all been done before. There are some things to like: it looks great and Kathleen Turner and William Hurt are good. But in the end, it's a mildly interesting nostalgia piece. There's just nothing new here. Rated so high on technical merit alone.

14. On Golden Pond - It's a silly melodrama about getting old and being estranged from your kids and grandkids. It's not especially interesting to look at. It's not particularly well-written. But Henry Fonda and Katherine Hepburn are terrific. It's worth watching just to seem them for the last time.

13. Clash Of The Titans - This would be a great movie but for Harry Hamlin. He's just plain awful. Ray Harryhausen's masterpiece, watch it if you've forgotten what special effects were like before computers. Features Laurence Olivier, Maggie Smith, Claire Bloom, Burgess Meredith, Sian Phillips and. . . Ursula Andress.

12. Gallipoli - I was a Mel Gibson fan before he spent the last year offending me as much as any filmmaker ever has. He still was in a lot of great movies though, and this was the first. He's more of a supporting actor here. This is an excellent war movie about the disastrous, British led Australian attack on the Turks. It's also the best film about runners from 1981, much superior to the deadly slow Oscar-winner Chariots Of Fire. The Pogues song "The Band Played Waltzing Matilda" references the same historical events as this film. Peter Weir's one of the great underrated directors of our time; he consistently makes above-average to great movies.

11. An American Werewolf In London - Not scary at all. Not hilariously funny. But in it's own way, it's a perfect weird little horror-comedy. Avoid the remake at all costs, even though it has Julie Delpy in it. The score is the funniest thing about the movie. Life mocks me, even in death.

10. Blow Out - If Carrie isn't Brain DePalma's best movie, then this is. Essentially a dumber version of Coppola's The Conversation, John Travolta plays a much less interesting audio-tech guy than Gene Hackman did in that other movie. Whereas Coppola's film is about the weird little man and how what he overhears drives him over the edge, DePalma just goes for the basic thriller-type movie. Effective and entertaining, but a lot less interesting.

9. Pennies From Heaven - Perhaps the most depressing musical of all time. Stars Steve Martin and Bernadette Peters, though they lip-sync all the songs. Beautifully unrealistic sets, like what Scorsese did in New York New York only more obviously fake. Christopher Walken also stars, and dances. Directed by Herbert Ross, who also did Play It Again, Sam, Steel Magnolias and Footloose.

8. The Evil Dead - Not as good as it's sequels, but tremendously important. Weird, hilarious, and oh so cheap. One of the pioneers of independent film. I don't quite get the Bruce Campbell worship I encounter fairly regularly. Joel Coen was the assistant film editor.

7. Excalibur - Odd, uneven, King Arthur movie by John Boorman, the director of Deliverance and the great Point Blank. Liam Neeson, Patrick Stewart and Gabriel Byrne all play supporting roles. Arthur is played by the guy who played Prince John in The Lion In Winter (hey, he was also in Troy and The Devil's Advocate). There's never been a truly great Arthur movie, as far as I've seen. This is about as good as it gets.

6. Time Bandits - The perfect kid movie if your kid happens to be a huge geek. That was me and I loved it. Still do, in fact. Little kid kidnapped by dwarves and hurtled through history? What's not to love? An amazing cast: Sean Connery, John Cleese, Ralph Richardson, Ian Holm, Michael Palin, Shelly Duvall, Katherine Helmond, David Warner and Kenny Baker. One of my all-time favorite lines: the kid asks God why there is evil. God says "I think it has something to do with Free Will. . ."

5. Stripes - The only truly classic comedy of 1981, as the SNL and Second City guys started to run out of energy and die off. But Ramis and Murray are still going strong. I don't know if Bill Murray ever made a movie quite this anarchic and subversive again. It exists solely to make fun of the establishment and its military. Of my 20 favorite comedies of all-time, I wouldn't be surprised if half of them were made between Animal House in '78 and Ghostbusters in '84. This would definitely be one of them. I want to party with you, cowboy.

4. Reds - Ah, why so high a rating for such a flawed movie? I don't know, frankly. It's such a great looking movie, about such interesting people, with such a great cast (Warren Beatty, Diane Keaton, Jack Nicholson). I think a better movie could be made out of Jack Reed's book. I've read half of it and it is truly amazing to read a day-by-day, you-are-there account of the Bolshevik Revolution. These were such interesting people, if Beatty had just resisted the temptation to make it into a conventional Hollywood Love Triangle Movie, this could have been a classic. As it is, it's just very good.

3. The Road Warrior - The second Mel Gibson movie on this list. Don't let the horrendous Beyond Thunderdome bias you against this legitimately great action movie. A post-apocalyptic Spaghetti Western, with very real Kurosawa influences. A near-perfect genre film, there wouldn't be anything like it until John Woo's great Hong Kong movies 15 years later. George Miller went on to direct Lorenzo's Oil and Babe: Pig In The City.

2. Das Boot - Another great action movie, though it has hardly any "action". Certainly the best submarine movie ever, and in the running for best war movie. Certainly no other film so effectively conveys as palpable a sense of the claustrophobia of submarine life. I've only seen the Director's Cut version that came out 10 years ago or so. I hear there's an even longer version that aired as a miniseries on German television. I'd love to see that. Wolfgang Peterson, after going Hollywood, is still one of the top high-quality action directors around. He did In The Line Of Fire, Outbreak, Troy, Air Force One, Enemy Mine and The Perfect Storm.

1. Raiders Of The Lost Ark - If you haven't seen this movie, why are you reading this? I saw it dozens of times before I could do long division. I don't think I've ever met anyone who didn't like an Indiana Jones movie. I suspect it's not really possible. My pick for the best Steven Spielberg movie ever. I'm trying real hard to think of a flaw in this movie. . . I guess Karen Allen's a pretty mediocre actress. . . . That's all I've got.


I didn't do too badly covering this year, I'd be surprised if any of these Unseen Movies would make my top 15: