Well, between the start of baseball season and a lot of movie buying and watching and a lot of working, it's been awhile since I've done any blogging. So, here's some reviews of the movies I've seen lately, and I'll get around to putting up the 1966 list hopefully in the next couple of days. 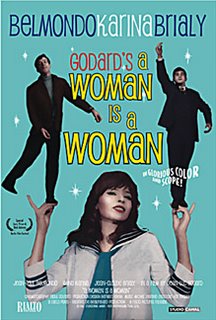 A Woman Is A Woman - Jean-Luc Godard's idea of a musical instantly becomes one of my favorite Godard films (and, thanks to the sale at DeepDiscountDVD.com, the only Godard I own on DVD). Anna Karina is at her best as a part-time stripper who, on a whim, decides she wants to have a baby. Her boyfriend, jean-Claude Brialy doesn't want to, and mockingly suggests she enlist the help of their friend, Jean-Paul Belmondo, who happens to be in love with Karina. The story is overthetop melodramatic, but the great thing about the movie is Michel Legrand's score: the music constantly wants to turn the film into a musical, but never quite gets going. It's the broken, demented, yet still romantic cousin of The Umbrellas of Cherbourg. Like Brialy says, "I don't know if it's a comedy or a tragedy, but it's a masterpiece."

V For Vendetta - A very good action film with a surprisingly good script. Hugo Weaving's great as V, he's got one of the best voices in film today. Natalie Portman's accent comes and goes. I like the joke of having John Hurt play the Big Brother dictator (he was the lead in the movie of 1984). I have a few minor quibbles with parts of the film (the backstory, the last action sequence, an unexplored and unresolved theme which might involve predestination vs. freedom) and the more I think about the movie, the more of them I come up with. But it was still very entertaining. The number 15 film of 2005. 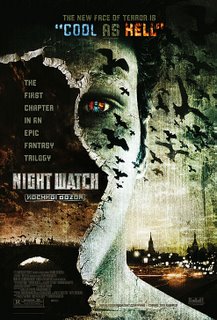 Night Watch - This movie gets an incomplete, first because its only the first part part of a trilogy but more importantly because of the loud Russian teenagers in the theatre who totally ruined the mood by whispering, laughing randomly and playing with their cell phones. At least they stopped having actual conversations (in Russian, naturally) after I yelled at them. Anyway, it was a cool looking movie and may end up being a pretty good trilogy. I'm rating it # 20 for 2004.

The Squid & The Whale - A nice little film, though I didn't like it as much as Kicking And Screaming (#4, 1995). A different look to the film than Baumbach's first two, what with the hand-held camera and a hint of arty, almost jump-cutty editing. I don't know why Laura Linney got any Oscar buzz for this, not that she was bad or anything, she was just unremarkable. Thankfully, she did not get a nomination. Jeff Daniels was very good though. Very evocative of its time and place and culture and I liked that it stayed within the kids' point of view instead of explaining the parents' side as well. I've ranked it the #9 film of 2005.

DOA - Mediocre psuedo-noir. Edmund O'Brien gives a fun, semi-hysterical lead performance, and the story's interesting enough. But there isn't really much all that new here aside from the clever set-up:

"I'm here to report a murder."

There's some good misdirection in the plot, a compelling score by Dmitri Tiomkin (including a great hallucinatory scene in a night club), but it lacks the visual style of the really great films noir though the movie has an exciting pace and energy. The supporting actors, though, are really pretty bad. 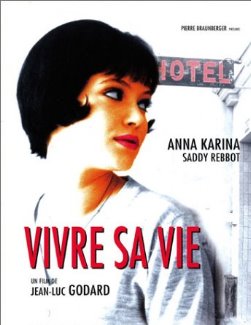 My Life To Live - It's a great movie and all, but I like Godard better when he's having fun. Still, Anna Karina is amazing, this is the best performance I've seen from her yet., though it's my least favorite of her movies. Some of the "tableaux" are great, I particularly enjoyed the old professor, the scene in the record store, the dance sequence, the documentary-style montage as Nana's being taught how to be a professional, and especially, the whole last chapter. My Godard list, keeping in mind that they are all great:

Inside Man- An above average thriller/heist movie from Spike Lee, though I have this weird feeling that there's something more profound going on in the film that I can't quite put my finger on. . . . Something about racism and terrorism and the banality of evil and the emptiness of threats and public fears. . . I don't know. All the actors are very good, and Lee's direction was stylish and effective. The last act does kind of drag, but I think that's intentional. Weird performance by Jodie Foster, but I liked it.

Sword Of Doom - Wow. Reading about this film, I see it was supposed to be but Part One of a trilogy, and it's a damn shame it never got finished. I like the ending a lot as is, but some of the duller stretches of subplot would be more excusable if they'd ever gotten resolved. Still, a beautiful film, a fine performance from Toshiro Mifune and a brilliant intense, physical one from Tatsuya Nakadai. This film was clearly a big influence on George Lucas (Nakadai would have made an amazing Vader, instead we got a whiny Hayden Christiansen; Yoda's death scene in Return of the Jedi is almost wholly ripped off from a scene here) and Tarantino for Kill Bill Vol. 1 (that should be real obvious). My favorite non-Kurosawa Samurai film.

They Live By Night - Noirish young-lovers-on-the-run movie that's nearly totally ruined by Farley Granger. He was merely a bad actor playing a preppie in a pair of Hitchcock films (Rope and Strangers On A Train), but playing a young ex-con/former circus performer? Ugh. Nicholas Ray's direction is slick and stylish, and Cathy O'Donnell is quite cute (and acts circles around Granger), but that just isn't enough to make me like this movie. 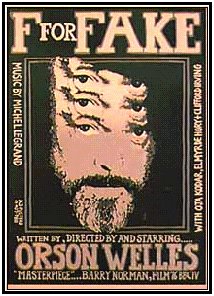 F For Fake - Everything you could possibly want from an Orson Welles movie: a brilliant visual style (though created by editing here instead his usual techniques), a multilayered, profound yet entertaining story, a great lead performance from Welles himself, and one good-looking Hungarian woman. I've rated it the #2 film of 1974). This was my first DVD blind buy, but it was a pretty safe bet that I'd love it, as I have loved every one of Welles's films that I've seen:

Orson Welles: One Man Band - Bonus film on the Criterion F For Fake DVD. As a documentary, it's not much. It's not, as it apparently wants to be, an essay film along the lines of F For Fake. And it doesn't really work as a traditional documentary either: too unfocused; doesn't follow any apparent order, chronological or otherwise; isn't particularly informative about much of the footage it does show; and it only covers the work that Welles left unfinished during the last 20 years of his life, while glossing over the unfinished work from the first 25 years of his career (like Don Quixote). Anyway, it's worth seeing just for all the footage of Welles, fragmented and disorganized though it might be. 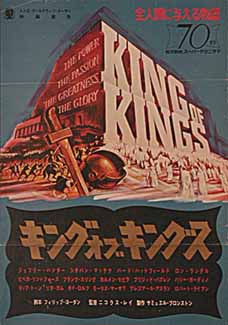 King Of Kings - The Nicholas Ray version from 1961, it was pretty interesting. Maybe it's just because I watched the end of Do The Right Thing earlier that day, but I thought the film seemed to be paralleling the MLK/Malcolm X argument from the civil rights movement in the early 60s: violence or non-violence. Jeffery Hunter's Jesus is a uncomplicated symbol of peaceful non-violence, and he's contrasted with Barrabas and Judas (played by an unrecognizable Rip Torn), who are violent revolutionaries. Of course, this means some parts of the Jesus story have to be left out: no talk of swords for him, and certainly no attacking of moneychangers. The production is what you'd expect from a Hollywood bible epic from the time, and the direction and the performances are quite good. Some of the voices are a little weird, and the dubbing has some flaws, but it isn't terrible. Orson Welles's narration is, of course, excellent.

49th Parallel - British-Canadian propaganda film from the early days of World War 2 by Powell and Pressburger. The basic idea is to get Canadians involved in the war effort by showing them how wonderful they are and that the Nazis can get them too. A U-Boat crew gets stranded in Canada and makes its way across the country, encountering various Canadian stereotypes along the way. Laurence Olivier is hilarious as a French-Canadian trapper with an outrageous accent. Anton Walbrook is great as the leader of an Amish-type sect of German émigrés, he and the leader of the Nazis (Eric Portman) have a great scene of dueling speeches. Leslie Howard plays an effete intellectual who learns to bravely confront the Nazis and Raymond Massey plays a seemingly honorary American: loud and lazy but who becomes mobilized to join the fight in the end. Very entertaining and effective propaganda. 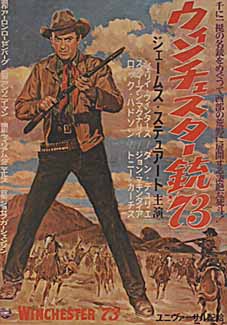 Winchester '73 - The first Jimmy Stewart-Anthony Mann Western, it wasn't as dark or noirish as I expected it to be. The story's quite good, with Stewart's revenge quest (and his concurrent gun search) providing an effective frame for what is essentially a tour of the West, descending into lower and lower levels of civilization (it starts with Dodge City, peaceful and ably run by famous lawmen, then is a battle between Indians and Cavalry, finally the chaotic violence of psychotic bandits). There's even a nice twist at the end, not in the same class with a movie like, say, Oldboy (#8, 2003), but it did elicit a minor exclamtion of "that's fucked up!" from me.

Friends With Money - Interesting attempt at discovering what happens if you make an ensemble character study without any interesting characters. Also, it teaches the profound truth that money cannot, in fact, buy happiness. Many great actresses are wasted in this mediocrity.
Posted by Sean Gilman at 12:10 AM 3 comments: