On The Lower Depths 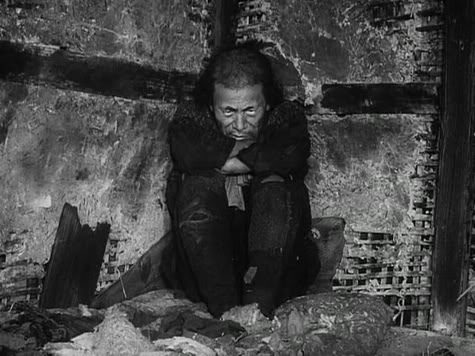 I'm going to start by saying that this isn't the least bit "filmed theatre", at least not as I understand the term.  To me, it means a more or less direct translation of a play to film, with little of the technique we generally use to differentiate the experience of watching a film from that of watching a play.  "Filmed theatre" is static, with little in the way of camera movement; it films a flat space perpendicular to the camera to create the effect of a proscenium arch; the actors are frontally focussed, addressing an imaginary audience; there's not much in the way of analytic editing to divide and/or explore the theatrical space, either for dramatic emphasis (closeups at big moment) or just to create a rhythm of varied looks.  When I think of "filmed theatre" I think of the very earliest, pre-Griffith et al days of cinema, when filmmakers really would just plop a camera down and act in front of it with the goal of making the viewer feel like they were nestled into an orchestra seat at a broadway show.  Of course, very few films that would rightly be called "filmed theatre" made since 1912 or so really fit with so strict a definition, but usually when I see that term, I expect to see a lot of those elements, at least significantly more than in a film shot and cut in a standard way. 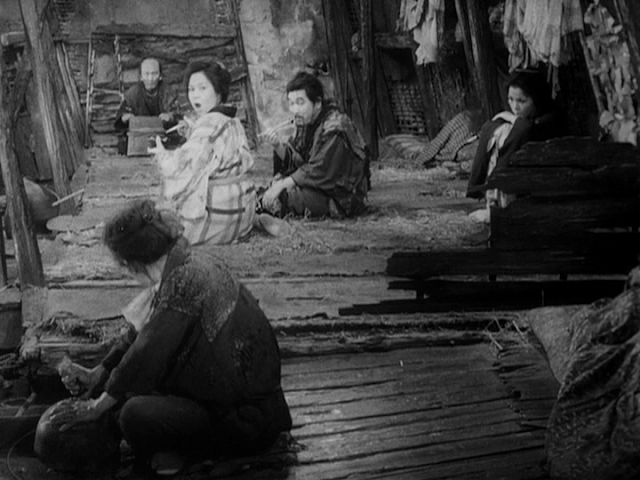 Well, The Lower Depths is about as far from that idea of "filmed theatre" as one can get.  Director Akira Kurosawa, adapting a play by Maxim Gorky, takes a very talky play limited to essentially one location and creates a tour de force of directorial style.  He basically throws every trick in his playbook at the screen in an attempt to cinematize the play, and the result, visually at least, is pretty breath-taking.  Kurosawa was always a master of composition, especially the relative arrangement of characters within the frame (a skill he learned no doubt in training to be a painter), and this is perhaps his most visually dense film.  He pulls off a trick I've only ever seen done as successfully in films by Hou Hsiao-hsien, where a shot of a few figures talking will be held for quite awhile before you realize exactly how many characters there are on-screen: the shock of recognition after looking at a shot for three minutes and realizing there's actually a character sitting in the bottom left corner is fun, having that previously unseen character suddenly leap to life and begin berating the other characters is genius.  There's one shot early in the film that appears to feature three characters in conversation, then you discover a fourth, a fifth, a sixth and finally you realize just how densely packed the slum these wretched people are living in really is.

Kurosawa also avoids theatricality by filming the main set, a common room in a shack where a number of drunk, sick and for all intents and purposes homeless people crowd together, roughly parallel to the axis of the camera, keeping the whole depth of field in focus.  Instead of a proscenium view with the actors arrayed before us as on a stage, we get a three dimensional space with the characters piled on top of each other yet separated, all on their own planes.  In final third of the film, though, Kurosawa returns to the same common room and films it perpendicular to the camera, but closer up.  The effect is to bring the characters together (they're united in their common shock at the preceding events) in a way they weren't at the beginning of the film. 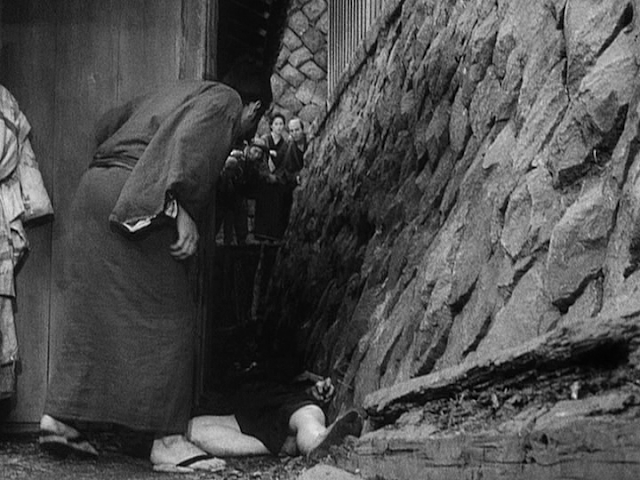 There's a lot more: the camera moves more than usual with Kurosawa (certainly more than it would move in his later films), he films at unusual angles (there's a cool shot early in the film with the Laughing Samurai from Seven Samurai: Kurosawa gives him a low angle shot with a smooth movement in and simultaneous tilt up, a heroic framing against the sky, ironic considering his doubtful status as a penniless ronin).  Kurosawa's compositions are always interesting, posing characters at odd, dramatic diagonals, in diamond-shaped groups of four where no one looks at anyone else, on different levels not just in depth but in height as well. 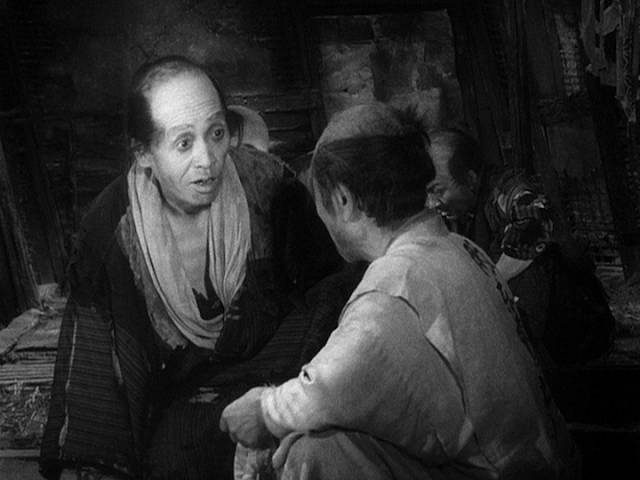 The acting is uniformly pretty great, featuring a ton of Toho contract players, many of which are recognizable from other Kurosawa films, especially Seven Samurai, The Hidden Fortress, Throne of Blood and Yojimbo.  Toshiro Mifune is, as always, the ostensible star, but the film belongs to Hidari Bokuzen (unforgettable as Yohei in Seven Samurai), who plays a passing old man who who seems wise in dispensing grandfatherly advice but is probably concealing some horrible secret. 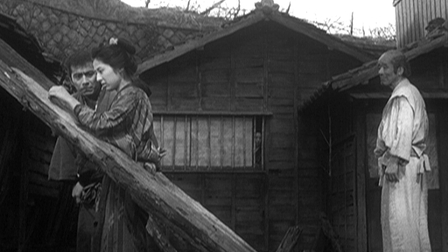 Unfortunately, while the film transcends what I would call "filmed theatre", it does suffer from what a lot of play-based films do, that of being too written.  See, it's not the visual style failing to "open up" the film that is the problem, rather it's a matter of everything in the film being put into words.  Theatre is a verbal medium, just as film is a visual one, and in a play you expect the characters to say what they're thinking in interesting and dramatically compelling ways.  To a certain extent, that kind of thing is expected in a (talking) motion picture as well, but the problem I've been having lately with a lot of very writerly films is that the fundamental wordiness of the scripts not only gums up the visual artistry of the filmmaker (not in Kurosawa's case of course, but in others) but it subverts the kind of reality that's most appealing on film.  (Why I should react this way to the "writtenness" of this film, or Marty or The Big Knife and not the very stylized and writerly films of, say, Whit Stillman, Quentin Tarantino, Ben Hecht, Woody Allen, etc is a question I don't yet have a satisfactory answer to). 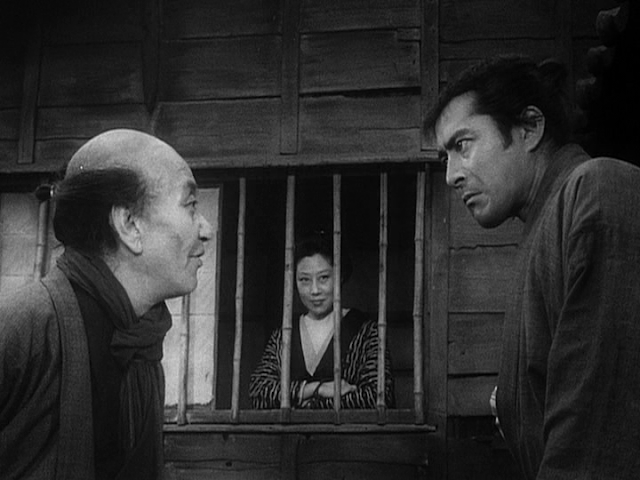 In the end, like a lot of these over-written films, The Lower Depths just feels phony.  And worse, it's the kind of phony with a lame message: that it sucks to be poor and live in a slum that's easily mistaken for a garbage dump because the people that live at the bottom of society are just mean and awful and there's no hope so just get drunk because you're going to die of tuberculosis anyway so you might as well enjoy it.  Maybe that's the difference:  The Lower Depths, like the Paddy Chayefsky and Clifford Odets films I haven't been enjoying, is trying to convey a social realist message, but the unreality of the writerly dramatic style is creating a disconnect, whereas the writerly films I do like are generally not the least bit concerned with reality or trying to convey a socially conscious message.  The verbal form is conflicting with the thematic content, creating an overall feeling of phoniness. 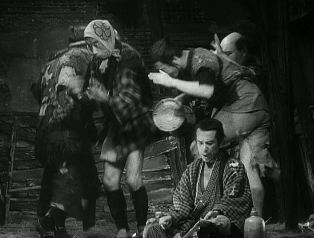