If I had to pick a favorite Shaw Brothers director, and thankfully I don't, Lau Kar-leung would be my choice.  His visual style isn't particularly innovative or beautiful, and he doesn't bring the raw, anguished physicality that distinguishes the work of Chang Cheh, or the sense of the spiritual transcendence found in the work of King Hu.  His direction is elegant and precise, valuing the clarity of the image above all else, particularly if those images involve bodies in motion.  In this sense, he's the kung fu heir of Fred Astaire, who famously demanded that his dances be shot with as few cuts as possible, with the actors visible in full, head-to-toe shots.  I'm willing to bet that Lau's average shot length is higher than most Shaw directors, as his films always seem to have a few scenes of extended single-take action, with dual combatants engaged in a series of movements as intricately intertwined as any Astaire-Rogers foxtrot.

Lau's skills as a performer take center stage in Mad Monkey Kung Fu in addition to his obvious talents as director and choreographer.  I've seen him in smaller parts in other films, but never in as big a role as he plays here.  I'll admit, seeing him actually perform his routines was as fun and exciting for me as when I first started seen Bob Fosse perform his own routines in movies like Kiss Me Kate and Give a Girl a Break.  Lau often worked with his adopted brother Gordon Liu, and the two couldn't form a better, closer choreographer-performer partnership.  It's great when two (or more) minds can collaborate in creating something as elaborate as a dance or kung fu routine, but there's a special charge in seeing someone performing their own work, unmediated by the artistic drive of their collaborator(s).

Lau plays a traveling performer and master of the Monkey Fist kung fu style, which mixes quick, darting movements with circus acrobatics with goofy monkey-sounds and scratches.  The Monkey King story is an enduring one in Chinese mythology and films, but I still can't help but think Lau was led in this more comically lowbrow direction following the breakthrough success of Jackie Chan's Drunken Master (directed by Yuen Woo-ping), which was released the year before, in 1978.  Before this, the Lau films I've seen have all been very serious (Executioners from Shaolin, Shaolin Mantis, The 36th Chamber of Shaolin) with the later even mixing in some King Hu-inspired Buddhist theology.  Even Heroes of the East (aka Shaolin vs. Ninja), from the same year as 36th Chamber, treats its comic premise rather seriously.  Mad Monkey Kung Fu starts seriously enough, with Lau's performer Chen tricked into getting blackout drunk by a gangster (the great Shaw Brothers villain Lo Lieh) which leads to Chen's sister agreeing to become Lo's mistress and Chen agreeing to have his fingers broken so that he'll never be able to do his kung fu again.  But much of the rest of the film is devoted to silly comedy and mugging.

Several years later, Chen is a struggling street performer (he has a trained monkey) who befriends a local pickpocket, serendipitously named Little Monkey.  Chen trains Little Monkey in the way of the Monkey Fist so that he can defeat the local extortion gang.  When that gang turns out to be headed by Lo Lieh, who savagely beats the unprepared Little Monkey, the training begins in earnest for a final revenge showdown.  These final training and fight sequences are some of Lau's best work as a choreographer.  The last training session, with Chen displaying impossibly quick and detailed movements and Little Monkey quickly learning to mimic them until the two are totally in sync reminded me of nothing less than one of the great tap duets in film history, Gene Kelly & Donald O'Connor's "Moses Supposes" from Singin' in the Rain.

Beginning with Mad Monkey, Lau increasingly seemed to reach for the blend of action and comedy Chan and Sammo Hung were then pioneering and that would reach its apex (or nadir, depending on your point of view) with the films of Stephen Chow and Wong Jing in the 1990s.  His next film, 1980's Return to the 36th Chamber, is easily my least favorite of his movies thanks mostly to the lameness of its comedy, and though My Young Auntie, Legendary Weapons of China and especially 8 Diagram Pole Fighter (all made between 1981 and 1984) mark somewhat of a return to form, he never really regains the seriousness or ambition of the first 36th Chamber.  After the mid-80s, his career as a director pretty much ground to a halt (along with the Shaw Brothers studio as a major force in Hong Kong cinema), though he did have one masterpiece left: directing Jackie Chan himself in Drunken Master II.  Lau's in his late 70s now, and hasn't worked since acting and choreographing Tsui Hark's Seven Swords in 2005.  But he does have a film upcoming: he's credited along with Yuen Woo-ping as the choreographer for Wong Kar-wai's The Grandmaster.

Showing more of a noir-by-way-of-Yojimbo influence than most Shaw Brothers films, this Chor Yuen-directed adaptation of a novel by Ku Lung shows that there's more to kung fu movies than simple revenge and enlightenment plots. Chor takes his time setting up a world ruled by devilishly clever gangsters demanding absolute loyalty from their subjects. A master swordsman, Meng Sheng Wen, an assassin for hire, is ordered by his boss to kill the head of the Lung Men Society, Uncle Sun Yu. He takes his time heading out for the job (distracted as he is by a pretty, poetry-reciting girl living in the local Butterfly Forest) and in the meantime a gang war is started between the Lung Men Society and the Roc Society, a rival criminal organization. Various bodyguards are killed on both sides, and Uncle Sun's secret weapon, Lo Lieh playing a mysterious man with a deadly, razor sharp hat, is killed, but by who?  Was it Meng?  A weaselly assistant-turned traitor? Or was it Uncle Sun's right-hand man, the master of 72 secret weapons, Lu Hsiang Chuan (played by Yueh Hua, from Come Drink With Me)?

The film is simply bursting with minor characters that Chor, along with the great stable of actors at his disposal at Shaws, is able to give more depth than their screen-time really earns. The most poignant, and disturbing, scene in the film comes near the end, as Uncle Sun makes his painstaking (and rather unbelievable) escape from an assassination attempt. A man who owes him his life helps him, and the price for that loyalty, as he well knows, is that he'll have to kill himself to prevent Uncle Sun's enemies from getting any information from him. Unfortunately, both the man's wife and two children also see Uncle Sun. So the man and wife commit the group murder-suicide honor demands. It's absolutely heart-breaking, and pushes the bounds of good taste, not unlike Hitchcock blowing up the kid on the bus in Sabotage. It's telling though that in a film about disloyalty and betrayal, it's those who are most loyal and honorable to their bosses who seem to suffer the most. Not only this simple peasant family, but everyone who aids Uncle Sun's escape dies for the cause while only by betraying his master does Meng Sheng Wen defeat the "bad guys" and ride off with the pretty girl. 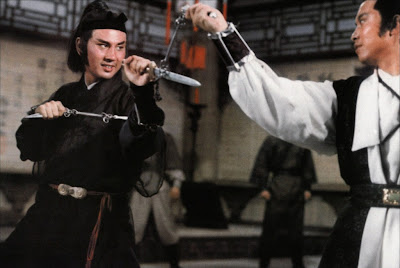 Meng doesn't have a "code" and he doesn't do his job. He just does what he likes when he likes, like Mifune in the Yojimbo films. He has his own sense of right and wrong, and that is what dictates his actions, not some social construct like "honor" or "loyalty". His greatest trait is that he's flexible, where everyone else in the film is bound by their social status and proscribed role. Uncle Sun spends decades thinking up an elaborate escape route (to the point that he has a man living in the sewer below his house for years, waiting for the one day he'll be able to help him escape on a boat) but never imagines that he could be betrayed by the person closest to him. Meng brings the Taoist corrective to the rigid Confucian world the gangs exploit. Meng is played by Chung Wa and while he brings a fine relaxed energy to the often overwrought Shaw Brothers world, but the role might have been better served with some Mifune-esque electric charisma. As it is, his character disappears for large sections of the movie, and at times he ends up seeming more passive and lucky than wise.
Posted by Sean Gilman at 2:46 PM No comments: