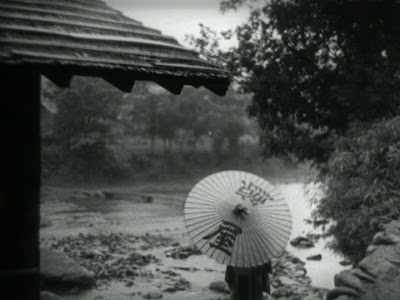 The Masseurs and a Woman - The last two films in Criterion's Hiroshi Shimizu boxset take place at resort spas.  This one follows a pair of masseurs, both of them blind (as apparently all masseurs in the two films are), and their interactions with various guests.  The opening sequence, with the masseurs hiking to the spa (in shots reminiscent of Shimizu's earlier film, Mr. Thank You) neatly establishes the blind men in their character (decent guys, but not above irascibility and revenge-taking) and abilities (they can tell how many people they are passing on the road by sound and smell).  At the spa, we meet a variety of characters: a group of students who aren't particularly nice and receive painfully destructive massages in turn, a single man and his nephew, and a woman from the city.  One of the masseurs falls for the woman in one of the most seductive scenes in all of Japanese cinema as she passes him in the street and teasingly leads him along with the smell of her perfume.  It's a lovely film, combing the visual elegance of Shimizu's Japanese Girls at the Harbor with the low-key humanist melodrama of Mr. Thank You.  The #8 film of 1938. 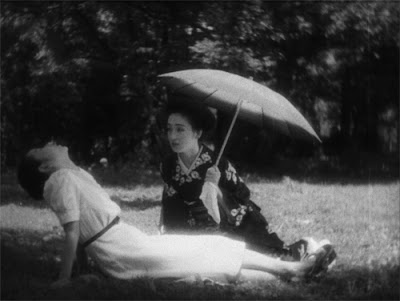 Ornamental Hairpin - The last film in the Shimizu box follows a self-created community of vacationers at a spa.  Yasujiro Ozu's great star Chishu Ryu stars as a young man who accidentally steps on the titular pin in a bath and injures his foot.  While he recuperates, the other guests (a young couple, a grump old professor, a grandfather with his grandkids) try to bring Ryu and the woman who accidentally left the pin behind together.  Ho hum, yet another Shimizu film overflowing with warmth and humanity.  The #7 film of 1941. 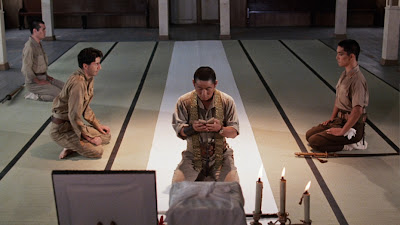 Merry Christmas, Mr. Lawrence - The first film I've seen from director Nagisa Oshima, but considering I have a boxset of six of them around here somewhere, it probably won't be the last.  The obvious film comparison is with Bridge on the River Kwai, though the two films don't have much in common aside from their setting.  It's set in a Japanese WW2 prison camp where Mr. Lawrence (Tom Conti), who speaks Japanese, acts as the liaison between the Allied prisoners and their captors.  When David Bowie is assigned to the camp, the enigmatic commander (played by Ryuichi Sakamoto, a pop star of Bowie's stature in Japan) becomes obsessed with him.  Fortunately, the film's about more than gay panic and taboo-breaking.  Instead, every major character is complex and fully rounded.  The heart of the film is Takeshi Kitano's Sgt. Hara, who starts the film as a dogmatic Japanese soldier completely uncomprehending the possibility of any other kind of culture but, through his friendship with Lawrence and his observations of his commander's often bizarre behavior, comes to realize that the world is far more complex than the ideology of fascist Japan allowed.  Unpredictable and heart-breaking.  The #2 film of 1983. 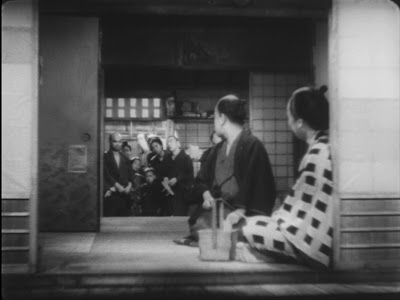 Humanity and Paper Balloons - I'm generally not a fan of depressing movies, but somehow I enjoyed every minute of this film, a thoroughly sad and dark film about the wretched lives of an alley of poor people in 19th century Tokyo.  The plot revolves around a pair of men trying to get ahead.  An out of work samurai appeals to the local minister, who knew his father, for a position so his young family won't starve, but keeps getting the brush off.  And the local barber tries to branch out into running a gambling ring but keeps getting beat up by the local gangsters.  The director, Sadao Yamanaka (who was drafted and died shortly after completing this film) never revels in the squalidness of the poverty he displays.  Rather, by establishing a real sense of community and collective struggle, he mitigates the darkness with a more humanistic sensibility.  The other residents of the alley, for the most part, cover for each other against the gangsters and rich swells that exploit them, whereas in a lot of Mizoguchi films (to take one of Yamanaka's contemporaries who loved to make films about the wretched) the entire world conspires against the protagonist(s), even (and especially) their fellow prostitutes and victims.  This communal sense not only gives the film a much needed air of hope for the future, but also makes it feel like a real world has been created for the viewer, rather than a lecture in morality.  The #7 film of 1937. 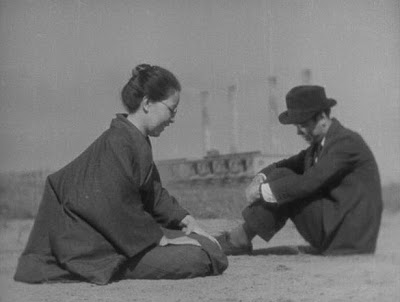 The Only Son - With these last three films, I managed to catch up on all the films by Yasujiro Ozu I've had around the house.  This one, his first sound film, is about a widow who works hard at a silk factory to send her son away to college so he can make something of himself.  When he grows up, she goes to visit him and learns that not only has he gotten married without telling her, but he's dropped out of school and can only find work teaching math at a night school.  He and his wife pawn what they can to show his mom a good time while in town (of course she doesn't really care to do all the touristy things they take her to), but she's disappointed in him nonetheless.  In the end, she learns that even though he's poor, he's actually a pretty good guy, and so not a complete failure after all.  It's an interesting twist on the ungrateful child genre, one of Ozu's perennial favorites, and all the requisite touches of his visual style are locked in place (I think this might be the first where you could say that, at least I don't recall the previous silent films being this Ozuvian).  The #7 film of 1936. 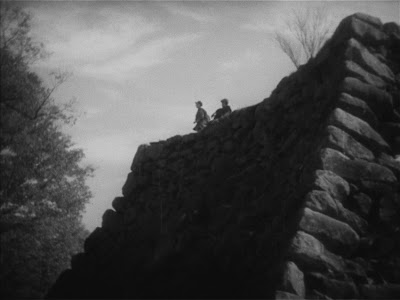 There Was a Father - A companion film to The Only Son, this time with Chishu Ryu as the father who sacrifices for his son's education.  Ryu plays a popular teacher who resigns after one of his students dies on a field trip.  For years he works a variety of odd jobs to send his son to school, rarely getting to see him.  When the son grows up and tries to get the father to move in with him, Ryu won't because it's his patriotic duty to stay at his job and work hard or something.  It's very much a wartime film, as Ryu adheres to the rigid code of honor and duty that formed the basis for the fascists' power in Japan.  But Ozu does what he can to subvert the ideology, pushing the tragedy of Ryu's separation from his son and the ridiculous sacrifices he makes about as far as he can.  The #7 film of 1942. 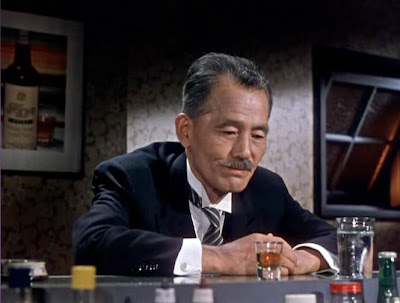 An Autumn Afternoon - Ozu's last film, and one of his best.  Chishu Ryu plays a teacher with three children.  The oldest is married and wants to borrow money from Ryu to buy a refrigerator for his wife.  His daughter is unmarried and doesn't particularly want to leave the house, but Ryu doesn't want her to become an old maid (the standard Ozu plot, of course).  The youngest boy is still in school.  The family dynamic is balanced by the professional and alcoholic, as Ryu regularly meets to get drunk with his old army buddies and former colleagues and students.  There's even a possible romance for Ryu, as a local bar maid reminds him of his dead wife.  The film is structured around a series of trips to bars and features the most rigid color scheme I can recall in Ozu.  Almost every shot contains red, white and blue elements.  I can't imagine why he would do that, but it's pretty cool nonetheless.

Watching this for the first time, I couldn't shake the notion that this was the greatest of Ozu's many films.  That may have been because I knew it was his last, or just because it contained all of the elements that make his films so great.  At a certain point, especially with the later Ozus, you get the feeling that with each film he is not so much repeating his themes and plots but rather trying to distill an entire career's worth of art into a single work.  Each of these films is not only a small part of a larger body of work, but contain the whole of that career within themselves.  I think that happens with the late films of a lot of great directors, but Ozu is, as he is in many other respects, the purest example I know.  The #5 film of 1962.
Posted by Sean Gilman at 3:54 PM No comments: