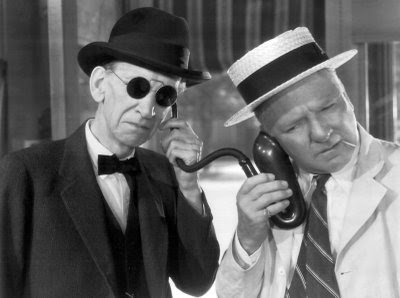 It's a Gift - WC Fields as a henpecked grocer who decides to buy an orange grove and move his family to California. As a movie, it's not much, mostly just an excuse for elaborate Fields set pieces (a baby loose in his store while an irate man demands cumquats, Fields trying to get to get back to sleep on his porch, the family having a picnic). It's often hilarious, but more built around physical comedy than the later Fields I've seen, The Bank Dick (which I liked better) and My Little Chickadee (which I did not). He's a funny man. The #10 film of 1934. 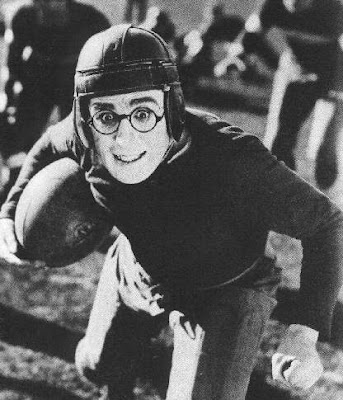 The Freshman - Harold Lloyd, though, I just am not impressed by. I liked this more than the other film of his I've seen (Speedy), but not because it's funnier (both have some good moments, but fewer than I'd like), rather because it seems more heartfelt. Despite the corniness of Lloyd's geek character's patheticness, by the end of the film, I couldn't help but feel for him. It helps that the last half hour of the film is by far the best (the end of a party sequence and the climactic football game, which at times almost reaches hilarity). It's not fair to compare him to Chaplin and Keaton (or the Marxes and Fields) (it's not fair to compare anyone to those guys) but I can't help but look at a scene in a Lloyd film and think they would have had ten jokes where Lloyd has one. The #4 film of 1925. 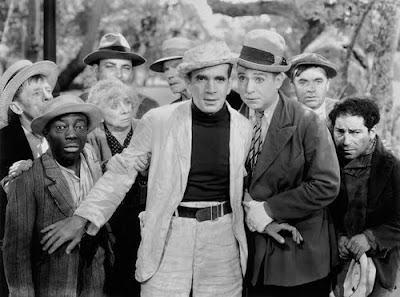 Hallelujah, I'm a Bum - A really wonderful musical from 1933 directed by Lewis Milestone (All Quiet on the Western Front, Ocean's Eleven) and starring Al Jolson. This is the first time I've seen Jolson in anything, and he's pretty great here, charming and funny, he reminded me of Gene Kelly more than anything else (without the dancing, of course). He plays the "Mayor of Central Park", the leader of a pack of bums that happens to be friends with New York's actual mayor, Frank Morgan (yet another wonderful performance by one of my favorite supporting actors). Morgan has a fight with his showgirl girlfriend, who tries to kill herself, only to be rescued by Jolson, suffer amnesia and fall in love (in that order). Will Jolson give up his commitment to homeless life and get a real job? Will the regretful Morgan find his girl? Will she recover her memory, and if so, which Mayor will she choose? There's much hilarity from the supporting cast, including Edgar Connor as Jolson's "valet", and silent film stars Chester Conklin and Harry Langdon, who particularly stands out as a Bolshevik trash collector endlessly haranguing the homeless for not being workers and instead getting fat off the leftovers of the corrupt capitalist system. The songs are pretty good too: not the best stuff by Rodgers and Hart, but not bad at all. The #3 film of 1933. 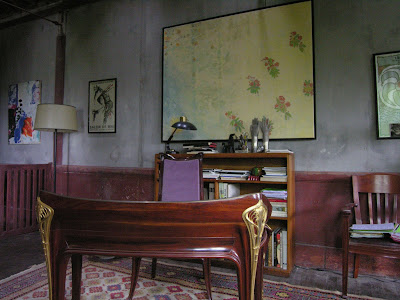 Summer Hours - Hmmm . . . needs more Binoche. This seems miles away from the last Olvier Assayas film I saw (the Asia Argento techno-thriller Boarding Gate, which was great), being instead a leisurely, episodic story of the last days of a familial home. It's not nearly as apocalyptic as it might have been in lesser hands (think a heavy-handed metaphor about the decline of civilization from the likes of Michael Haneke), instead it's elegiac: we drift through the scenes not with an urgent foreboding, but rather the calm realization that all things (and families) come to an end and that this is as it should be. This is conveyed most effectively by Assayas's visual style, all long, wandering hand-held shots, the best of which is the film's magnificent final scene, a wandering trip through the house as a group of kids enjoy its many charms for their (but not the house's, surely) last time. As for the objects that are at the heart of the film's story, the things the family must to decide how to deal with, they have value, but what kind and how much depends on the valuer, I suppose. Objects are just objects, its people that give them meaning. A museum values a vase because it's unique and exquisitely crafted by a master artist, an old woman because it holds flowers and memories of her friend. In the end, the film is on the side of the old woman, and so am I. The #4 film of 2008.
Posted by Sean Gilman at 11:00 PM No comments: