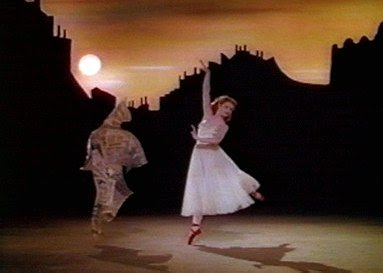 Posted by Sean Gilman at 7:46 PM No comments: 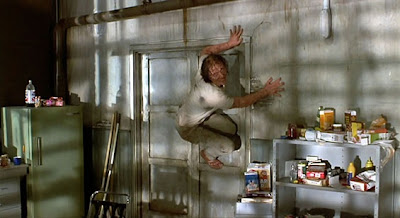 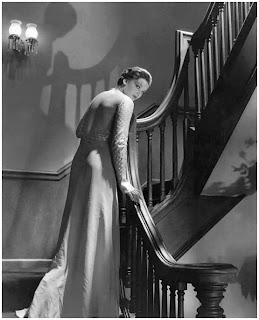 Things have been awfully busy lately, and I haven't had much time for movie-watching or writing about movie-watching. So here's a roundup in the style of the small ball style I'm loving from the surprisingly first place Mariners.

Thirteen Women - A ridiculous film about a group of upper class women who are dying under mysterious circumstances after getting their fortunes sent to them by a psychic in the mail. Turns out it's Myrna Loy, the half-Asian girl they were mean to in boarding school who's using her hypnotic powers to exact her revenge. Loy's as great as always, in her scary/sexy Fu Manchu mode; the movie's got a certain charm. The #20 film of 1932.

Milk - Director Gus Van Sant doesn't do much to differentiate this biopic from the rest of that tired genre. The performances are good, as they usually are in this kind of thing, and the real-life story is great. The movie, however, mostly fails to create a compelling character out of Dan White, something the fine documentary The Times Of Harvey Milk managed to do much better. The #13 film of 2008.

Synecdoche, New York - I'm not a Charlie Kaufman fan. I find him overly clever, narcissistic and depressing. All of that is here in this ambitious and opaque film, about a theatre director using a theatre grant to relentlessly gaze at his own icky navel. Like all of Kaufman's films, its construction is ingenious and there are several moments of near-brilliance (the burning apartment, for one), but ultimately his misanthropy is so distancing that he film never manages the kind of transcendence it appears to be reaching towards. The #10 film of 2008.

A Scandal In Paris - The first of two collaborations I've seen recently between director Douglas Sirk and the great actor George Sanders. They're early Sirk films, working in a noir genre that he largely abandoned when he started his string of melodrama masterpieces in the 1950s. Set in Napoleonic France, Sanders plays a master thief who gets redeemed by love and becomes the head of police. Light and fun, with flashes of Sirk's brilliance in mise-en-scene (mirrors and such). The #16 film of 1946. 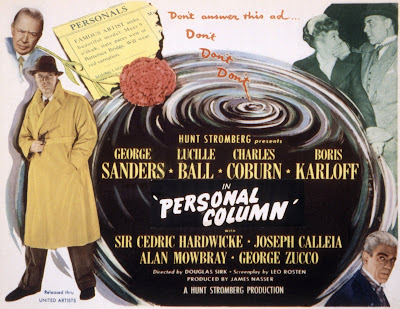 Lured - The other Sirk-Sanders film, this time with Lucille Ball as a showgirl hired by the police as bait for a high society serial killer. Sanders plays her rich boyfriend, who may or may not be the killer. Sanders is again terrific, but Ball appears out of place. The #8 film of 1947.

Two Lovers - Director James Gray is considered something of an auteur in Europe and a hack here in the US. I've only seen one of his other three films (Little Odessa, which I didn't much care for), so I can't really speak to that. But this is a fine film, a muted coming of age romance with Joaquin Phoenix as an unstable, occasionally suicidal, young man torn between the nice Jewish girl his parents want him to marry and the crazy shiksa next door (Gwyneth Paltrow). It's the mellow pace and direction (the flashiest it gets is Gray's alternation between warm colored indoor scenes with harsh blue-gray exteriors), along with the understated acting all-around (Isabella Rossellini stands out as Phoenix's mother) that manage to turn this generic plot into a fine little movie. The #8 film of 2008.

The Devil And Daniel Webster - William Dieterle's great adaptation of the Stephen Vincent Benet story about a poor farmer who sells his soul for money and then enlists the famous orator and senator to defend him when it's time to pay up. Walter Huston is magnificent as the Devil, a cackling capitalist who haunts American history. Though set in the early 19th Century, the film is, of course, about the Great Depression: a leftist denunciation of the effects of greed on American society. With Simone Simon as the sexy maid the farmer leaves his wife for, Edward Arnold as Webster and the great Jane Darwell as the farmer's mother. The #7 film of 1941. 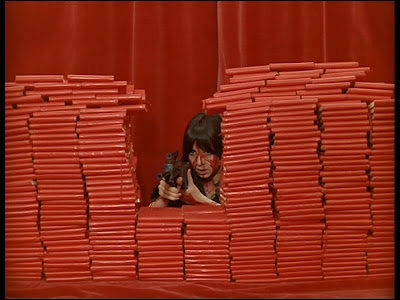 La Chinoise - I don't know how it's intended (Godard's thought at this time was in flux and accounts of it are hard to keep straight), but this film about student Maoists plays as a comedy to me, an affectionate parody of well-meaning, but generally clueless rich kids playing at revolution (not unlike the kids in Band Of Outsiders playing at being gangsters). One of Godard's prettier films, with vibrant primary colors and a steady camera contrasting with the pedantic dialogue (the kids spend much of the film lecturing each other about class struggle). The #6 film of 1967.

The More The Merrier - Less funny is this screwball comedy with Jean Arthur renting out a room in her apartment to Charles Coburn, who then sublets to Joel McRea and tries to spark a romance between the two young people. Coburn's great in a larger than usual role for him, but the film's more dull than anything else. The #14 film of 1943.

Trafic - Jacques Tati's last theatrical film, the follow-up to the colossal loss he took when his masterpiece, Playtime, flopped. Much to his apparent distress, he's back playing M. Hulot, who is this time a car designer who must transport his invention from Paris to a car show in Amsterdam. Things of course keep breaking down, and hilarity ensues. More conventional than his other films, the gags lack the complexity of the ones in M. Hulot's Holiday or Playtime, or those films' sense of universality. It's never boring, but it feels like Tati's heart isn't really in it. The #6 film of 1971.

Both because Paul Robeson is so great, and because Whale's tight closeups on his face seem really unusual in a musical. The first 1/3 of the film is really interesting in the way it deals with race (not just in the plot, but the performances as well: Whale often situates the camera in either Robeson's or the segregated crowd's POV, and also with this scene, setting up the dichotomy between the white and black characters, and the bridge between them (and you gotta love Irene Dunne's little dance at the end):

But that whole element disappears as the plots rolls along and the movie becomes a rather choppy and generic rise to stardom story. The #4 film of 1936.

Footlight Parade - Most of these early Busby Berkeley choreographed films are uneven, with a lot of mediocre plot and generic characters leading up to spectacular dance sequences at the end. This one is no different, except with James Cagney starring as the producer of theatrical bits that play in theatres before the movie starts, the film never gets boring. Cagney zips through the semi-screwball dialogue, a skill he should have had more chances to develop (he's similarly great in Billy Wilder's One, Two, Three late in his career). At the end of the film, we get three Berkely numbers. The first is alright ("Honeymoon Hotel"), the second is one of the most amazing things ever committed to celluloid ("By A Waterfall", below), the third is a hilarious and impressive homage to the films of Josef von Sternberg and Marlene Dietrich ("Shanghai Lil"). The #5 film of 1933.

The Actress - Ruth Gordon you would know from her roles in Rosemary's Baby and Harold And Maude. This is the film version of her autobiographical play about how she persuaded her parents to let her go to New York to become an actress. Spencer Tracy is wonderful as her curmudgeonly former ship captain father and Jean Simmons brings a charming earnestness to the Ruth character that manages to do a good job of capturing the overheated theatricality of wanna-be actors. A sweet little movie by George Cukor that also features Anthony Perkins's first film role. The #19 film of 1953.

The Late George Apley - One of Joseph L. Mankiewicz's first films as a director, it doesn't have the brilliance of his best work (All About Eve, A Letter To Three Wives, The Barefoot Contessa) but it's still a fine film. Ronald Coleman plays a stuffed shirt Boston patriarch trying to manage, without much success, the modernization being imposed on his world by his children (who want to do crazy things like marry a man from -gasp!- New York). Coleman's performance is very good, managing to humanize a character who could otherwise be either a monster or a one-note bit of comic relief. The #11 film of 1947.

The Letter - The opening sequence of this film is amazing, I couldn't find a shorter clip, but the first two-three minutes after the title sequence is here:

After the titles end, there's a slow track across the natives relaxing to Max Steiner's Asian-influenced score (not unlike the opening of another 1940 film, John Ford's The Long Voyage Home). There's an invisible wipe to a shot of the house in moonlight, followed by the first normal cuts, as the shots begin to ring out. The camera rushes forward as Bette Davis walks out of the house firing, followed by a shot of the moon being obscured by clouds. The scene (on lookers and Davis) are shrouded in darkness, then a shot of the cloud passing by and a reverse cut to Davis, who turns her head sharply, her face demented in the moon's spotlight. A more breathtaking way of starting a film I haven't seen in quite awhile. From that point, the film becomes more conventional, a murder mystery about why Davis shot the guy, and whether she'll be convicted for it. It comes alive again in two other near-silent sequences: when she buys the eponymous incriminating letter and at the end, when the moonlight motif returns in a sequence that anticipates Jacques Tourner's I Walked With A Zombie. Davis is incredible throughout the film, it makes me want to see every other one of her films. Or at least the ones she did with William Wyler, who's direction in this film (as in their collaboration Jezebel) is often brilliant. The #6 film of 1940.

Love Me Or Leave Me - I had this on while writing this post, so I probably wasn't paying close enough attention, but this movie seemed pretty lame. James Cagney plays an old gangster who helps Doris Day become a star singer, but gets jealous when she falls in love with another man. Cagney's a great actor, of course, but both he and Day seemed totally lacking in energy, as did the direction by Charles Vidor - I swear there were only two camera setups through the first 30+ minutes of he film: Day on stage in a flat composition in front of musicians and a solid color backdrop with neither camera nor actors moving much at all and Day and Cagney in her dressing room arguing about something. Did I miss something, is this a film I should watch and pay closer attention to? For now, the #31 film of 1955.
Posted by Sean Gilman at 2:36 PM No comments: