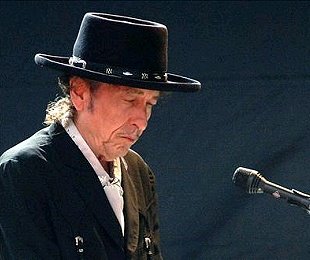 The wife and I went to see Bob Dylan at Key Arena last Friday night. The opening act, Kings Of Leon, was terrible. I didn't think that there were bands around today that wished they were Mother Love Bone, but apparently there are. The three non-singers in the band were at least competent musicians, though lacking in creativity. The singer, and whoever is the songwriter are pretty bad. they were a complete waste of time and a bizarre thing to see before a Dylan show.

Anyway, the Dylan part of the show was amazing, perhaps the best concert I've ever seen. I generally say Nirvana in January of 94 or the first time I saw Dylan (June 95) when asked what the best concert I've ever seen was. But this one may have topped them both. My expectations were pretty low for this show. The wife and I saw him a year and a half ago and his voice was in pretty poor shape and he just looked tired and bored on the stage. He was off to the side of the stage and didn't seem his old Dylan self.

Well, that was far from the case this time around. His voice was in top form and while he's still playing keyboards, he threw in some harmonica and some hilarious old man dancing and pointing at the crowd. He was back to being the coolest person on the planet, a title he's held off and on for the last 40 years or so.

I managed to write down the setlist, so here's a short rundown of what transpired:

The show started with a very mellow, breezy version of Maggie's Farm. It's a common set opening for Dylan, but usually in an angry, rocking version. Instead, this , with it's heavy emphasis on Dylan's keyboards, sounded like a refugee of his 80s period. Second was a similarly keyboard heavy (but more conventional sounding) version of She Belongs To Me. Lonesome Day Blues was third, sounding much like it did on Love And Theft. A breezy version of Positively 4th Street, an angry song wrapped in a slow, wholesome melody that again emphasized the keyboards wrapped up the first section of the show: light, ethereal sounds disguising the true nature of the lyrics.

The highlight of last spring's Dylan show was a blues adaptation of It's Alright, Ma, one of Dylan's greatest, and most angry songs. He played the same version again here, but it was an order of magnitude better. The band was more violent and Dylan's delivery was more coherent. Next was a rather pedestrian version of Just Like A Woman, like the song itself, it was well done, but I'm just not a fan of it. Perhaps Woody Allen forever scarred me against it with Shelly Duvall's character in Annie Hall. A conventionally ricking version of Highway 61 Revisited was next, followed by When The Deal Goes Down, the first single from Modern Times, in an identical-to-the-album version.

Next up was the highlight of the show for me, and one of my all-time favorite concert moments ever (along with the acoustic set at the Nirvana show, and Dinosaur Jr explaining my life at age 17 to me at Lollapalooza), my all-time favorite song, Tangled Up In Blue (no, I'm not afraid to be obvious, as any TINAB reader should know by now). The bulk of the song was typical of a Dylan performance of the last decade or so (he sang the multiple pronoun version while altering the lyrics of the strip club episode, gotta take the good with the bad), but it ended with (IIRC) the second harmonica solo of the night. I don't recall Dylan playing harmonica at the last show, but this time each solo started out tentatively and then builded to a point when the full band comes in. In Tangled Up In Blue it was perfect: the whole band together, fully integrated into each other, the song and the audience (or at least, me). It was one of those transcendent moments you go to a concert (or movie) hoping to experience.

Next up was a decent, if traditional A Hard Rain's A-Gonna Fall. For me, though, nothing tops the rollicking Rolling Thunder version of this song on Live 1975. It's the one version where the song doesn't feel bloated or pretentious. Watching the River Flow followed, but I have to admit I didn't recognize it (despite putting it on a birthday mixtape for the wife just two days earlier) because of the radical bluesy reconfiguration Dylan gave it. It's a great song., a personal favorite much akin to John Lennon's Watching The Wheels. I'm also certain it was a theme song to something, TV show, movie, whatever, but I can't remember what it is. 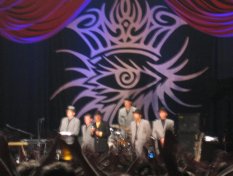 Next was a close-to-album version of Modern Times's Workingman's Blues #2, which brings up and interesting thing about the audience at Key arena that night. Yeah, they cheered quite loudly for the working man, but almost none of them were. They were almost entirely old and sold out. We were on the floor of the Arena, and it was dominated by folks in late middle age asking the people in front of them to sit down. Apparently those Ed Sullivan shows are wrong and in the 60s everyone sat politely at rock concerts. I even heard one guy claim that "John Cougar's version is better than Dylan's". Suffice it to say this elderly yokel was wearing an annoying vest. Anyway, the set closed with a rocking, if predictable version of Summer Days from Love And Theft.

There were three encores. First was Modern Times's opener Thunder On the Mountain. Played exactly as it appears on the album, Bob's apparently still thinking about Alicia Keyes. Next was Like A Rolling Stone, played fairly conventionally, notable mostly for the lighting effects. At the chorus's shout of "How does it feel?" the spotlights turned on the audience, essentially accusing them (us) of being the target of the song's accusation against the yuppies' ignorance of the plight of the poor. Considering the makeup of the audience, it was quite the accurate critique, not that any of them got it or anything. They'd all stand up and cheer when Dylan played the old favorites. Whenever he played a new song (three from the new album, 2 from Love And Theft) they'd sit down. Jackasses.

The show closed with an apocalyptic All Along The Watchtower, which, combined with the accusing Rolling Stone, and the angry It's Alright, Ma left me with the feeling that Dylan's one pissed off old man. Combined with his cooler than thou old man posing at the keyboards, and the positively ancient costuming of his band (grey suits and fedoras) he can't help but come off as a pissed off old man scolding his fans for their superficiality and ignorance. Same as he's been doing for 45 years. Same as it ever was.
Posted by Sean Gilman at 4:49 PM 4 comments: