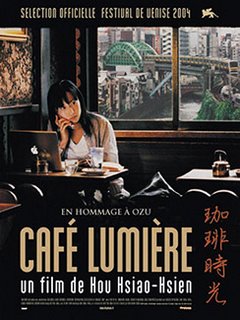 Café Lumière - I've been wanting to watch a Hou Hsiao-hsien movie for years, ever since I read about him in one of Jonathan Rosenbaum's books in 1998 or so. This was certainly a fine place to start with the Taiwanese director accalaimed as one of the world's best, despite never getting any real distribution in the US. Yo Hitoto stars as a young journalist just returned from Taiwan to her home in Tokyo. She tells her parents she's pregnant and enlists her friend, a bookstore owner (Tadanobu Asano, from Last Life In The Universe, #2, 2003) in her efforts to track down a missing composer. Created as a tribute for the 100th anniversary of the birth of Yasujiro Ozu, the film is obviously influenced by great director, as apparently Hou is in all his films. Plotwise, the film is ridiculously slow, if anything ever actually happens at all, but it's a beautiful and always interesting movie, with some beautifully composed shots of trains and the small houses, apartments, restaurants and shops of Tokyo. The #3 film of 2003.

Gaslight - Ingrid Bergman stars as a persecuted wife in this Rebecca-esque film noir. Bergman's as good as ever, though watching this I realized I've only seen her in a few movies: the two Hitchcock's (Notorious and Spellbound), Casablanca and The Murder On The Orient Express. I really need to see her Rosselini films, and Renoir's Elena Et Les Hommes sounds good as well. Anyway, Charles Boyer plays her husband who's slowly trying to drive her crazy by convincing her that she's crazy. Joseph Cotten plays the man who comes to her rescue. The noir style and Bergman's performance is what creates the psychological intensity necessary for the film's suspense to work. Director George Cukor had a long and interesting career, though I don't think anyone's ever called him an auteur. His films include: Little Women, Sylvia Scarlett, Holiday, Gone With The Wind, The Philadelphia Story, Gaslight, Adam's Rib, Born Yesterday, A Star Is Born, Lust For Life and My Fair Lady. 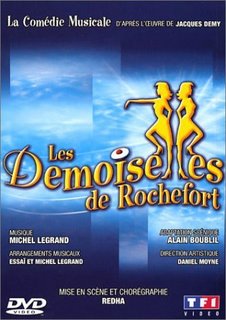 The Young Girls Of Rochefort - One of the best and most complicated musicals I've ever seen is this highly acclaimed sequel top Jacques Demy's The Umbrellas Of Cherbourg. Unlike that film, this is a full-on tribute to Hollywood musicals, complete with elaborately choreographed dance numbers and even a French speaking and singing Gene Kelly (still spry in his old age, by the way). Catherine Deneuve and her real-life half-sister Françoise Dorléac plays a pair of twins in search of true love, as is their mother, Danielle Darrieux, a pair of traveling dancers, George Chakiris and Grover Dale, an artist, Jacques Perrin, and a music shop owner, Michel Piccoli. The various characters keep barely missing their true loves, in a choreography as elaborate as any dance sequence in film history. The film may be the purest expression of the musical idea: that life is so weird and wonderful that the fullness of it can never be expressed in mere prose, but requires poetry, a melody and some bizarre patterns of movements to fully express it. The #3 film of 1967.

Mildred Pierce - You wouldn't think the world was clamoring for a mash-up of women's melodrama and film noir, but apparently in the 40s they were. Joan Crawford stars as a typical woman how builds a restaurant empire for the sake of her daughter who is nonetheless rejected by that snobby daughter because she isn't aristocratic enough for her. A whole new level of irony is added when you consider Crawford's real-life reputation as a mother. Only the second Crawford movie I've ever seen, after Grand Hotel (in which a much younger Joan is quite cute), I haven't even seen Mommie Dearest. I have been meaning to see Johnny Guitar for almost a decade but have never gotten around to it. Based on the James M. Cain (The Postman Always Ring Twice and Double Indemnity) novel and directed by Michael Curtiz (Casablanca, The Adventures Of Robin Hood, Angels With Dirty Faces, Captain Blood, Yankee Doodle Dandy).

The DaVinci Code - Ron Howard's adaptation of what A. O. Scott brilliantly dubbed "Dan Brown's best-selling primer on how not to write an English sentence" is the worst movie of his I've ever seen. The film combines all the charms of plagiarism, stupidity, wooden acting and pathetically unthrilling thrills. Tom Hanks, an actor who generally can't help but be charming, despite how bad the material is manages to give his worst performance as a professor of symbology (sic, seriously sic. I can;t tell you how much that word pisses me off) with a total lack of personality. Audrey Tautou, looking cuter than ever, plays the stupidest cryptologist in the history of cryptology. Only Ian McKellen was apparently smart enough to realize this film was a joke and infuses his role with a bit of ironic glee. I've read three of the book Dan Brown ripped off for this book, Umberto Eco's Foucault's Pendulum and Leigh, Baigent and Lincoln's Holy Blood Holy Grail and The Messianic Legacy, all of which are more interesting, more insightful and more suspenseful than this dreadfully stupid movie. 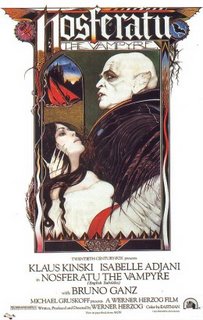 Nosferatu - This Werner Herzog version of the familiar story I had seen the first part of several years ago but couldn't stay awake long enough to finish, I won't go into detail why I couldn't. The film exists in a kind of middle-ground between Murnau's classic Expressionist horror film and Francis Ford Coppola's camp classic (can it be that already?) that rated #15 in 1992. Like the Murnau but not the Coppola, the movie is only tangentially related to Bram Stoker's original novel, but also like Murnau, that isn't exactly a flaw. Herzog manages to make the material his own, as I'm sure he can;t help but do, and adds the best ending for any Dracula movie ever, which has to be the invention of his own brilliant and twisted mind. I just finally got around to reading the New Yorker profile on Herzog yesterday, and man does it make me want to watch all his films. How can you not love that crazy German freak? The #6 film of 1979.
Posted by Sean Gilman at 7:43 PM No comments:

I've been watching so many movies it seems I have no time for any proper blogging. Here's some of what I've seen recently:

Gun Crazy - Quite a perverse little film noir directed by Joseph H. Lewis and starring John Dall (the actor who wasn't awful in Hitchcock's Rope) as a sharpshooter with a gun fetish and Peggy Cummins as one of the most evil femmes fatale in the noir canon. The alternate title is 'Deadly Is The Female' which is great, but better might be 'Guns Don't Kill People, Women Kill People".

The Killing - One of the few Kubrick movies I hadn't seen was this innovative noir heist film about a robbery at a race track. Sterling Hayden stars as the head of the criminal enterprise and the great minor character actor Elisha Cook Jr. plays the man whose wife blows the whole operation. Femme fatale indeed. The Out Of The Past podcast did a two-part series comparing this to Reservoir Dogs, in that both are heist films that feature fractured timelines, but that's about all they have in common. In the Tarantino film, the heist is a minor part of the story, it's the interactions between characters that's of interest. The Kubrick film, on the other hand, places the mechanics of the heist itself at the center of the narrative, and uses the complicated structure to heighten the tension of that heist. Anyway, it's a terrific Kubrick film with one of the better endings in noir history. 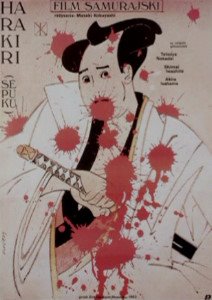 Harakiri - Anti-samurai film by director Masaki Kobayashi (Samurai Rebellion, #11, 1967; Kwaidan) and starring Tatsuya Nakadai (Sword Of Doom, #3, 1966; Ran, #1, 1985). Nakadai plays a ronin who shows up at a samurai castle asking to be allowed to kill himself in their courtyard. He's out to avenge the young samurai whom the callously forced to commit seppuku there with a bamboo sword. It's a nasty and violent, yet slowly paced film about the hypocrisy between the samurai's professed code of honor and the pragmatic politics necessary to being a ruling class. A very nice looking film, with yet another great performance by Nakadai, but the politics of it all was a bit heavy-handed for me.

How To Marry A Millionaire - Three hot chicks looking for rich husbands in what seems to have been a popular trope in the world of 1950s romantic comedies. An entertaining, if predictable trifle enlivened by the presence of Lauren Bacall and Marilyn Monroe. And Betty Grable's alright too, I guess. 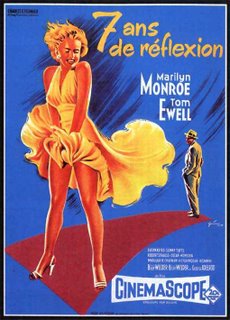 The Seven Year Itch - Another Monroe film, this one unfortunately doesn't seem to have aged very well. Tom Ewell reprises the role he played on Broadway as a mid-life crisied yuppie daydreaming about having an affair with his upstairs neighbor. Monroe's terrific, of course, but Ewell is far from it. The conventional line appears to be that he's too stagy and not enough filmy, which sounds about right. My least favorite Billy Wilder film, thus far.

Freaks - Eh. Circus freaks are abused by an evil and annoying woman who turn on her, get her drunk and, apparently turn her into a chicken lady. An innovative and influential film, I'm sure, but not in a genre I'm particularly a fan of. The tension between the film's ostensible theme that people should be nicer to freaks and the fact that the main reason anybody ever watches it is to, well, look at the freaks is interesting. But not that interesting.

Ride The High Country - Early Peckinpaugh Western about two old gunfighters trying to adjust to a modern world where their kind aren't especially useful or welcome. Joel McRea (Sullivan's Travels) is great as the wizened honorable lawman hired to escort some gold to a bank, and Randolph Scott is alright as his old partner along for the ride (and the hope of stealing the gold). It's a bit slow in the beginning, some may say elegiac, but the elegy's a little obvious for me, but picks up when the action gets rolling in the second half: then we get to see the Peckinpaugh that made The Wild Bunch (#4, 1969) and Pat Garret And Billy The Kid (#6, 1973) start to shine.
Posted by Sean Gilman at 12:20 AM No comments: