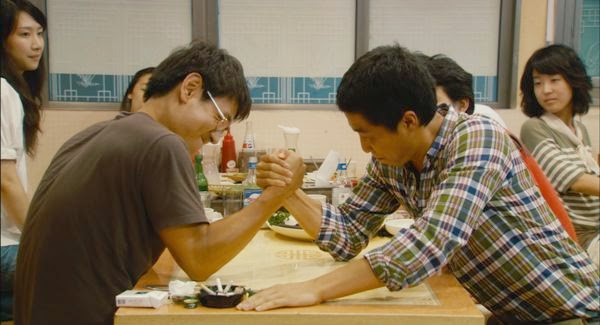 After recording the last episode of They Shot Pictures, the one on Lau Kar-leung, I decided to take a few weeks off from Hong Kong film.  It's been a year and a half now since a more or less random decision to rent a couple Johnnie To movies I hadn't seen yet around Valentine's Day of 2013 led first to a massive To and Milkyway binge and podcast and then an off-hand rental of Eastern Condors followed by The Summer of Sammo, an exploration of Hong Kong martial arts cinema centered around the rotund yet mercurial Sammo Hung. That in turn was followed by a more consciously-determined look at Hong Kong film with Running Out of Karma, ostensibly primarily concerned with Johnnie To and his influences and contemporaries, but really an exploration of the whole panorama of Hong Kong and Chinese language cinema. Along the way I've watched dozens (if not hundreds) of films, which is great, but every once in awhile I need to step back and re-orient myself with some classical Hollywood cinema, which had been the main focus of my movie-watching for years before I caught the Hong Kong bug. Of course, after about three weeks of this, I couldn't help but dive right back into Hong Kong and am now in the midst of preparations for the next They Shot Pictures, on King Hu.

Over the last few weeks I've posted a number of reviews here, as well as my mid-year look at the Best Films of the Year So Far (or rather, the Best Films from Last Year that Have Come Out this Year, So Far). I've got some other big lists over at letterboxd as well. For The George Sanders Show, Mike and I created an Alternate Top 100 Films of All-Time list (you can see my individual list here). On the occasion of Filmspotting's 500th episode, I came up with a Top 50 Films of the Last Ten Years list. And in response to a Film4 list that I feel neglected Chinese-language cinema, I wrote a 100 Must-See Chinese Language Films of the 21st Century list.

In addition to the big list, we've also had a couple episodes of The George Sanders Show since my last update. We covered Bong Joonho's Snowpiercer and Hong Sangsoo's Virgin Stripped Bare by Her Bachelors (the episode features a great interview Mike did with Bong himself), a couple of films called Lola by Jacques Demy and Rainer Werner Fassbinder, and a pair of Hollywood studio films with Hellzapoppin' and The Barefoot Contessa. The last includes our discussion of Thomas Schatz's seminal history of the studio-era, The Genius of the System, a book about which I had some serious reservations and disagreements.

These are the movies I've watched and rewatched over the last few weeks and where they place on my Year-By-Year Rankings. Links are to the reviews I've written here. Reviews or comments for the rest can be found over at letterboxd.