Running Out of Karma: King Hu's Legend of the Mountain

It starts with a Wagnerian incantation: elemental imagery calling forth the natural world, music rising with the sun, the mountain, the clouds and the river, always the river, rushing, falling, churning. A Touch of Zen begins much the same way, but this world is depopulated, not even a spider mars its surface. When the lone scholar does appear, he's dwarfed by his surroundings, a pinprick of consciousness in an beautifully indifferent nature. 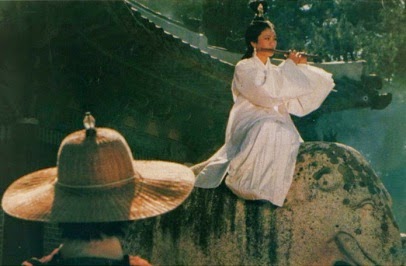 What follows is a ghost story, one that, unlike A Touch of Zen, Painted Skin and The Enchanting Shadow is not an adaptation from medieval Chinese literature (at least as far as I can tell, credits are murky) but rather an original screenplay by King Hu himself. An itinerant scholar, played by Hu mainstay Shih Chun, is tasked with translating a powerful Buddhist sutra. So he can work in peace, he's sent to a remote, supposedly abandoned temple complex. The people he finds there are a little odd, most notably Tien Feng's demonic mute servant Chang and Hsu Feng's pretty young girl Melody. Shih gets drunk one night and ends up marrying Melody, but it turns out she's a ghost who wants to steal the sutra for herself (in reciting it, an evil spirit will gain the power to control any human). Exactly how many people Shih meets are ghosts and how many aren't becomes the central mystery of the film, with everyone, his friend Tsui, a mysterious pair of priests (one Buddhist, one Taoist) and a local barmaid (Sylvia Chang, looking impossibly pretty) knowing more than they're willing to say, everyone's hiding something, no one will simply tell poor Shih what is going on. Throughout Shih will remain largely clueless to this other world that surrounds, guides, manipulates and tricks him. 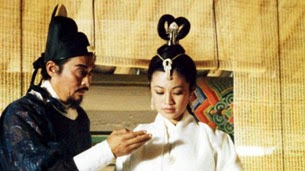 Where A Touch of Zen follows a kind of religious progression from everyday superstition to the abstract awesomeness of Roy Chiao's Buddha-nature, Legend of the Mountain looks backward, not to any one religious doctrine, but to a fundamental level of reality that neither Buddhism nor Taoism can fully explain or control. For long stretches the film is wordless, with the music and Harry Chan's images of nature giving us a glimpse, a feeling of this foundational world, one where the border between life and death, past and present and future is more porous than we are trained to believe it is.

But yet, far from a dry spiritual meditation, or even a Malickian heartfelt grasp at inexplicable profundity, Legend of the Mountain is also really funny. The film's central montage, on the occasion of Shih Chun's wedding night, duplicates the rhythm of the opening, but throws in lots of shots of insect sex, because, you know, nature (I nominate "King Hu's Nature-Sex Montage" as the next great band name). The ghosts are constantly bickering and conspiring amongst themselves, no one listens, everyone is afraid of everyone else. Hu plays out these shifting alliances and secrets, the quick eyes, the halting speech, in long shots, where we always see more than any one character, most especially the hapless Shih Chun. As a wuxia mystery film, it feels more in the spirit of Tsui Hark's debut The Butterfly Murders (also from 1979) and other New Wave works than it does the contemporary kung fu films of Sammo Hung, Yuen Woo-ping, Lau Kar-leung and Chang Cheh. Hu was always slightly out of step with the mainstream of martial arts cinema, but always leading the way forward. 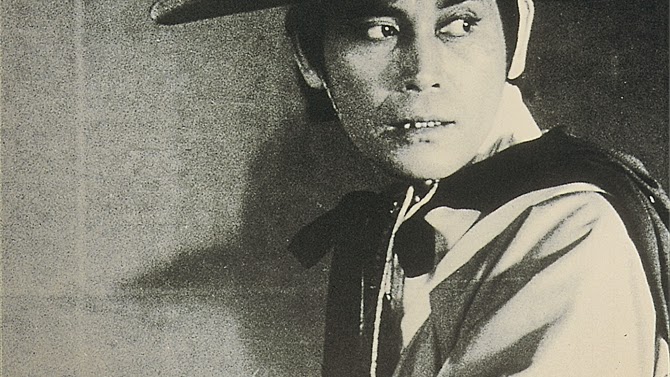 Shih is terrific as the scholar, dogged yet constantly befuddled, but ultimately competent (you do feel for him when he finally discovers how much he's been manipulated and the film's final shots wouldn't work if we didn't know this man so well as he stands alone against a raging river). It's a very different character than his ultra-confident swordsman in Dragon Gate Inn or even his not-as-clever-as-he-thinks scholar in A Touch of Zen. And enough cannot be said about Sylvia Chang, her ingenue performance here, as in Li han-hsiang's 1977 Dream of the Red Chamber (a stunning musical she starred in with Brigitte Lin), is almost unrecognizable from her grown-up roles in the late 80s (the Johnnie To films Seven Years Itch and All About Ah-long (which she also wrote), let alone her work as the best thing about the Aces Go Places sequels. More recently she's become a director of note, though I've only seen her short from the Taiwanese 10 + 10 compilation, a very moving film about capital punishment and religion. 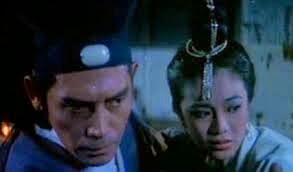 The film was shot in Korea, at the same time and with some of the same sets as Hu's other 1979 film, the similarly titled Raining in the Mountain. There's apparently a longer, three hour cut of the film (the one I saw was just of the standard 100 minutes) that sounds amazing. Harry Chan shot both films, two of his first screen credits (he shot two other films in 1979: Ronny Yu and Philip Chan's The Servant and Cecile Tang Shu-shuen's The Hong Kong Tycoon. Chan spent the 80s and 90s working mostly in Hong Kong, on a couple of the Aces Go Places films as well as Tsui Hark's Working Class, and worked for Peter Chan's UFO in the 90s (He's a Woman, She's a Man). He's apparently spent the last 15 years or so working in Canadian television, including The Collector, jPod (his last credit, in 2008) and Saban's Ninja Turtles: The Next Mutation. 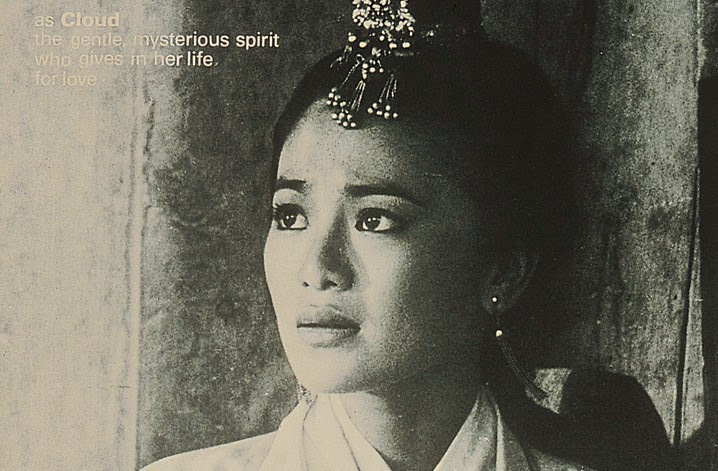