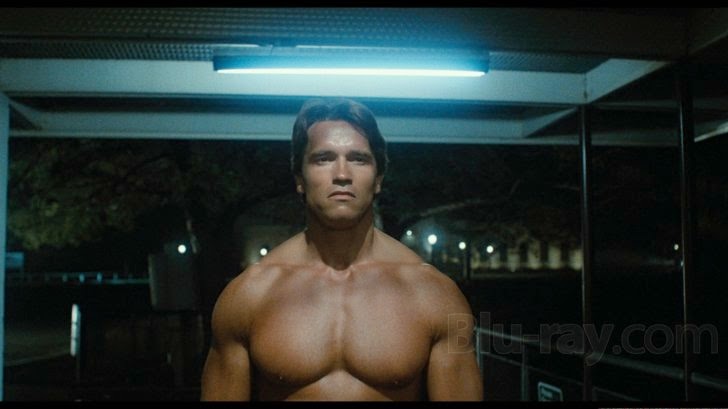 Some notes on the first two films in the series, movies I've seen more times than I can remember. The first a surpass hit, a relatively low-budget genre film that exploded both James Cameron and Arnold Schwarzenegger's career, a staple of my VHS-renting days. The second, released the summer I was 15 years old, I recall as the biggest movie event in the history of cinema.

The plot isn't as tight as it should be, with both Reese (the parking garage) and Sarah (calling mom) giving away their position far too easily/stupidly. But that can be forgiven as narrative shorthand: The Terminator (The Beast, Death, The End) is inexorable, he will find you.

I remain heartened by the boldness with which the film accepts the impossible paradox at its heart with no explanation, no timey-wimey mumbo jumbo. Sarah simply accepts the factness of what she has seen, and so gets to work.


The shot, cribbed from Alien, of the robot arm grasping at Sarah's face might be the most famous, but the early one, of big naked Arnold looking out over the vastness of nighttime Los Angeles, a giant on the eve of conquest, is the most prophetic. 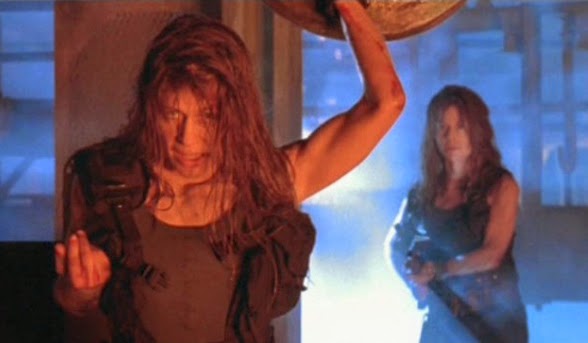 At once more juvenile and more pretentious than the first film.

Everything involving Linda Hamilton's Sarah Conner is exceptional, a normal woman pushed beyond sanity by knowledge of a future she might be able to prevent. Robert Patrick's villain too is great, though I'm not sure it entirely makes sense (the liquid metal can reform from a thousand shattered pieces into a complex terminating machine, but it can't make a gun because it has moving parts?) The special effects make up for a lot, with a lunatic vehicle chase, lots of big explosions and a trend-setting orange vs. teal final showdown.

I never thought I'd say this, but Schwarzenegger simply isn't robotic enough. He's great in the first film, the embodiment of implacable destruction. But his Frankenstein's Monster turned Pinocchio here is far too charming, too human, too winkily comic (right from the start too, with the cringe-worthy "Bad to the Bone" needle drop).

In shifting the hero role from the adults to a 10 year old boy, the film is one of the last steps in the transformation of the action blockbuster that began with ET, one that sought to bring its main characters, and, not necessarily but usually, its level of emotional and intellectual insight, to the level of their target audience, namely 10 year old boys. There had always been films about kids, of course, but it was rare in the studio era to have such a high profile action picture with pre-pubescent leads (in fact, there was a whole separate genre for them, the boys adventures (Moonfleet, Captains Courageous and the like) being separate from the grown-up adventures Gunga Din or Stagecoach and so on). The first Terminator, all grown up, was released in the year Indiana Jones added Short Round, the first step in the dumbing down process of that series, which eventually led to Shia LeBouf-Tarzan jokes. (See also the wholly superfluous children of Jurassic Park). Even Michael Bay eventually succumbed to this trend (though his films were always keyed to the young boy mentality, it wasn't until Transformers that they actually starred one). These films always existed side-by-side with more traditional grown-up films (the Lethal Weapon series, or the Predator movies), but it was the ones with kids that most dominated from the mid 80s to the mid 90s.

Anyway, pretty much everything involving the monster and the boy is awful.

Posted by Sean Gilman at 9:35 AM No comments: