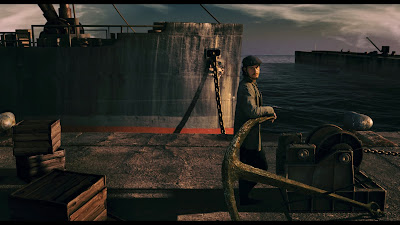 It's almost too tempting to compare Manoel de Oliveira's latest to Carl Theodor Dreyer's final film Gertrud. Both are resolutely odd, theatrical in a way that would seem anti-cinematic in the hands of a lesser director. Both films consist almost entirely of actors talking, exquisitely framed in extremely long takes. But where Dreyer's camera moves with the actors and eschews editing, Oliveira's never moves, holding his perfectly composed shots and only occasionally (and with striking effect) breaking for an insert - a POV look at a window or doorway, or a reverse shot of the other participants in a conversation.

The story, set in the same indeterminate (at least too me) past as the other two Oliveira's I've seen (The Strange Case of Angélica and Eccentricities of a Blonde-Haired Girl, at VIFFs 2010 and 2009, respectively), revolves around the household of Gebo (soft 'G') an elderly debt collector played by Michael Lonsdale. He lives with his wife (Claudia Cardinale) and daughter-in-law (Leonor Silveira) in a modest four room row house, though we only ever see the apparently tiny central room (I say apparently because Oliveira's lens choice seems to dramatically flatten the space in his 1.66 frame, so as to make it appear all the more painting-like). It seems Gebo's son has been missing for eight years, but he and the daughter-in-law have convinced the wife that he's still in communication. The first third of the film takes place in a single evening as each of the women has a conversation with Gebo, mostly about how miserable and unhappy their lives are. Then the son returns. 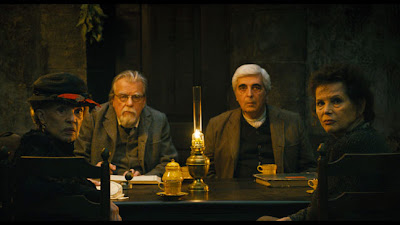 The next long scene, taking place a day or a few later, is given a much-need jolt of levity by Jeanne Moreau, playing a neighbor who comes over for coffee and a chat. With the addition of a friend of Gebo's (who will carry on a cute flirtation with Moreau, he explains how in his youth he wooed women with his flute playing), Oliveira gets to indulge in some shot/reverse shot cutting. Gebo and friend are seen in much the same setup as the previous scene, center frame, nicely balanced with a bunch of herbs hanging on the wall in the top left corner, while the two women (Cardinale and Moreau) are seen from the opposite side of the table in a shot just as painstakingly symmetrical, the candle lamp close in the foreground perfectly splitting the frame in half with the actresses on either side. This long middle section concludes with the son, returned and baffled by his family's resignation and boring complacency railing against them for being 'buried alive' while he alone has truly lived and experienced life. That his life appears to largely revolve around being a criminal, a cold starving thief in the night, is immaterial.

The film seems to me a dialogue between two kinds of awful: the black evil of the son's amoral soul and the mundane hypocrisy and cowardice of Gebo - forever asserting his  honesty (all his peers became rich but only he had the integrity to remain risk-free and poor) while creating a fantasy world for his wife, a lie for which he honors himself as a sacrifice. His son may be a thief, but at least he's honest about it. In the end, Gebo will sacrifice himself again. To protect his son, to preserve his wife's illusions, as his own way out of a trap. He lies about being a thief, a man chasing his shadow.
Posted by Sean Gilman at 6:12 PM