Running Out of Karma: Bruce Lee's Fist of Fury and The Way of the Dragon 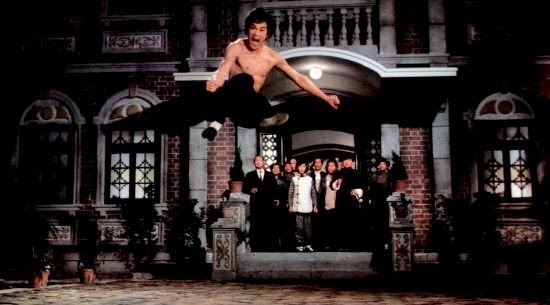 Amazing how simple the plot is in comparison with Gordon Chan's Jet Li-starring remake Fist of Legend. Bruce Lee's Chenzhen is nothing more or less than a force of nature, bursting on screen in agonized grief, progressing from there through an agonized murderous rampage (in 1930s Shanghai he returns to find his master has been killed. He learns it was by the Japanese, he kills them). Only occasionally is he allowed to express anything other than agony: when he adopts disguises to spy on the Japanese; in his one romantic scene with Nora Miao. Otherwise he may as well be The Hulk. No depth, no complexity (compare Li's Chenzhen, torn between two cultures and two families, genuinely mixed in his sympathies), simply the pure muscular expression of violent revolution, of the (racial) underclass rising up against their (apparently motiveless?) oppressors. There are hints at self-awareness, of nuance: the fact that so many of Lee's fellow Chinese feel the effects of his violence, the collateral damage of his rampage, is felt. And the tortured expressions, often in slow motion, that take over Lee's face when he administers a killing blow convey not the orgasmic release of violence, but the corruption of the mind and soul that each act of destruction takes on him (compare to the puns and wisecracks that accompany such displays in the 80s films of Schwarzenegger and Stallone). Still, it's not hard at all to see why it was a hit, despite the acting, screenplay, sets, direction, characters, sound design, etc, all cheap and chintzy relative to the films Shaw Brothers was putting out at the same time. Even another Golden Harvest production like Hapkido, with a very similar Chinese vs. Japanese premise, released six months later in 1972, looks better and had more thought put into it. 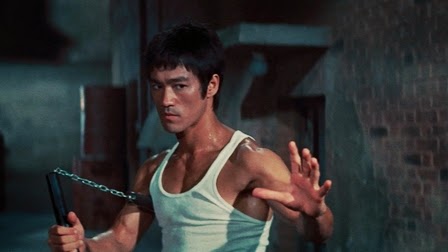 The Way of the Dragon

Much more satisfying than Lee's previous two films, The Big Boss and Fist of Fury. The plot is still deathly simple: Lee is sent by his uncle to Rome to defend a Chinese restaurant against a gang of thugs trying to force a sale. But Lee, this time serving as writer and director in addition to star and choreographer, gets a lot more of interest to do in-between the fights. It may be strange to say, but the opening airport sequence, with Lee's Tang Lung starred at by an old white lady then attempting to order in a Western restaurant (capped by his showdown with The Five Soups) is one of my favorite sequences in any Bruce Lee film, above and beyond most of his fights. He's aided immeasurably by Nora Miao as the straight woman in these scenes, exasperatedly showing him around, visibly annoyed to be afflicted with this bumpkin (but watch how the way she looks at Lee changes after she sees him fight: there's no romance in the film, but plenty of sex in that gaze).

The fights in Bruce Lee's films are different than what came before and after in good and bad ways. To the good is their realism: much shorter, more violent and more wrenching than the opera-influenced balletic displays or effects driven sword fights of the late 60s wuxia films. But the downside of that is that they never really feel like contests, more like a bunch of guys standing around waiting for Lee to inflict violence upon them (the climactic fight with Chuck Norris here is a rare exception, acknowledged by Lee with a touching grace note of respect). The choreography in a King Hu or Chang Cheh movie is less realistic, but more exciting. The charge you get in a Bruce Lee action scene is different, it comes not from the "bodies in motion" thrill you also find in a great dance sequence, but emanates instead from Lee himself, first from his status as an icon (of Chinese nationalism, of masculinity, of badassery) and only secondarily from the character he's ostensibly playing. His tragic early death has only heightened this effect: it's impossible to watch one of his films now outside the context of his star status, separate from the deep and widespread influence he had, not just in Hong Kong, but worldwide.

Lee's work as a director is a significant step-up from Lo Wei's work in the previous two films. Lee is less choppy in his editing, adding to the realism of the fights by allowing them to play out in longer, more distanced takes. He does make occasional use of the point of view shots that Lo used as well, with Lee kicking or punching directly at the camera, an effect that would be more terrifying if it didn't feel slightly silly. The comedy in the first half of the film is charming, Lee's fish out of water much more interesting in Rome than he was in The Big Boss's Thailand. I can't help but wonder where he would have gone from here. He died in 1973, two years before Lau Kar-leung's directorial debut and five years before Sammo Hung's. How would he have fared with those guys? Would Lee's idiosyncratic street fights have meshed with Lau's traditionalist Southern Shaolin styles or Hung's acrobatics? Would he have pushed the comedy in his films along the lines Jackie Chan and Yuen Woo-ping would explore? How would he have fared in a showdown with equally skilled and accomplished martial artists like the Five Venoms, rather than an endless succession of ugly white guys? Would he have found a second life in the heroic bloodshed cop/Triad films of the 80s and 90s (like Ti Lung in A Better Tomorrow), or been reduced to smaller cameo roles (like Ti Lung in Tiger on Beat or David Chiang in Election)? Or would he have simply crossed over to Hollywood, leaving the nationalism of his Hong Kong films a faint memory, a blip on the road to riches playing Conans, Predators and Rockys?