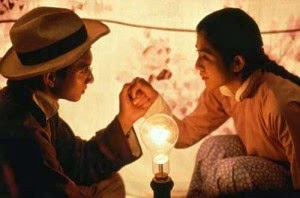 Love in the Time of Twilight

This should be seen more. It doesn't even have a wikipedia page, and the DVD I rented of it is cropped to 4x3, yuck. Anyway, it's just your typical mashup of Back to the Future, Ghost, Cantonese Opera, Looney Tunes and vomit jokes. It might be the best of Tsui Hark's four films from 1995. Has any director had a year with so many films that were so different from each other? The Blade is a dark as hell ultra-violent wuxia film, The Chinese Feast a farce about food and community, and this one an effects-driven, period romantic comedy (more on the fourth, The Lovers, a hallucinogenic romantic melodrama, below). What a year. 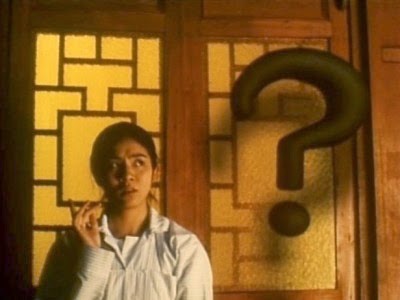 A variation on the multiple-couple format of his own Shanghai Blues and Peking Opera Blues, where a group of mixed-gender protagonists dance curlicues around each other and the plot with love and sadness, except here the couples are doppelgangers of the two central figures. What begins as a conventional romantic comedy (anti-romantic opening where the leads instantly hate each other and engage in an escalating prank war, in this case unfolding in a marketplace dominated by fortune tellers and religious rituals), turns into a sci-fi mystery when the man, played by Nicky Wu, after instantly falling in love with another woman spends the night with her and the next day finds himself setup and killed by bank-robbing bandits. And then his ghost comes back to take Charlie Yeung, the woman from the opening, back in time to save himself. Complications ensue. As does hilarity, romance, all kinds of liminal spaces ("the time of twilight" indeed!) and, as in the best Tsui films, quiet moments for supporting characters (the woman's father singing a song for his dead wife) as well as the heroes (a young couple entranced by the ephemerality of fireworks) that are genuinely beautiful. 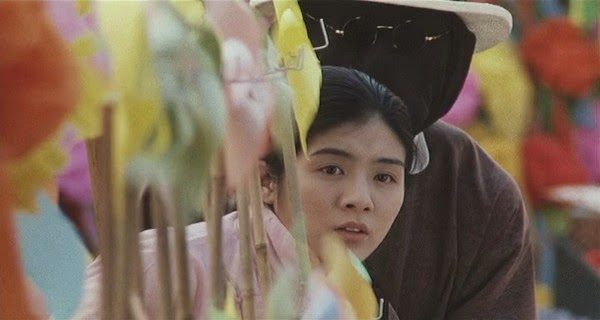 Much of the action takes place backstage at a theatre troupe, where Yeung performs, mostly unsuccessfully. This is a recurring location for Tsui: you can find such troupes in both the Blues movies as well as in Once Upon a Time in China. These performative space, places where characters engage in make believe and often find themselves remaking their own plots, seem particularly in line with the playfulness of Tsui's approach to film, his willingness to take his films to unexpected places, places founded on traditionally low forms of entertainment: slapstick comedy, vibrant melodrama, violent, even horrifying action. What distinguishes Tsui's vaudevillian forays from the work of Wong Jing, or even Johnnie To's The Eighth Happiness (which ends with a meta-finale on a Cantonese Opera stage) and its derivative works is that no matter how crazy Tsui's narratives become, they are always grounded in clear (even basic) emotional drives. His people make sense even if their worlds do not.

Starts as your typical guy-falls-in-love-with-girl-dressed-as-a-guy rom-com, then turns into hallucinatory elemental melodrama. Also starring Nicky Wu and Charlie Yeung from Love in the Time of Twilight, Tsui here presents a fairly faithful version of the oft-told legend of The Butterfly Lovers, a story somewhat akin to European legends like Tristan and Isolde, Heloise and Abelard or Romeo and Juliet: star-crossed lovers kept apart by various social constraints, ending in tragedy. Yueng is a young woman from a prominent family of cosmetics merchants circa 200 AD. Trying to sand off her rough edges, her family send her to a local college, with the twist that in order to be educated, she has to pretend to be a boy.

This apparently is not an uncommon ruse, as her mother did the same trick when she was young, and the college's dean is an understanding and sympathetic woman (undisguised) herself. There is a bit of a gay panic subplot as Nicky Wu meets her and, despite thinking she's a boy, finds himself falling in love with her. But that subplot is fairly quickly resolved and ignored (as opposed to forming the foundation of the story as in some of the lesser works of Wong Jing or Sammo Hung, or treated with sensitivity and intelligence as in Peter Chan's He's a Woman, She's a Man) as Wu figures out that she's a girl and the romance proper begins, followed quickly by the unfolding tragedy.

Wu graduates the college and Yeung returns home. Now a minor official (he's been studying to pass the test that qualifies you for a governmental position), Wu proposes marriage to Yeung's family. But he's outdone by a representative of the wealthier and more influential Ma family. Wu and Yeung conspire to elope but are undone by her parents. As the lovers are forcibly kept apart, nature itself seems to take a side. The sky turns nightmarish shades of pink, purple and orange; tears of blood flow; fierce winds and rain batter the unnatural constraints of the social order. Finally, the earth itself swallows the lovers whole, uniting them in a death that would be horrific if it wasn't so romantic.

Romance and Tsui Hark seem an odd combination. He seems much more at home in wacky comedies and action movies, genre fare that allows him to both explore and update traditional modes of Chinese narrative while at the same time giving them a subtly subversive twist. Wong Kar-wai's brand of earnest wistfulness seems anathema to Tsui, and his best romances follow the sidelong, game-playing pattern that also marks Johnnie To's romances. 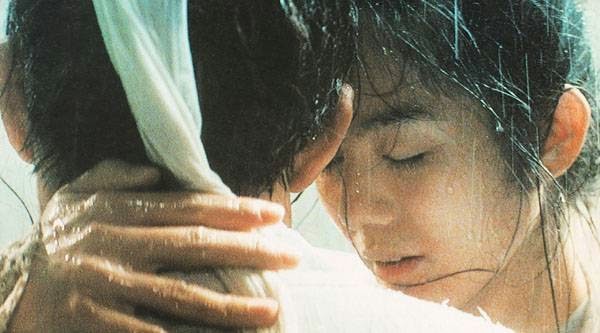