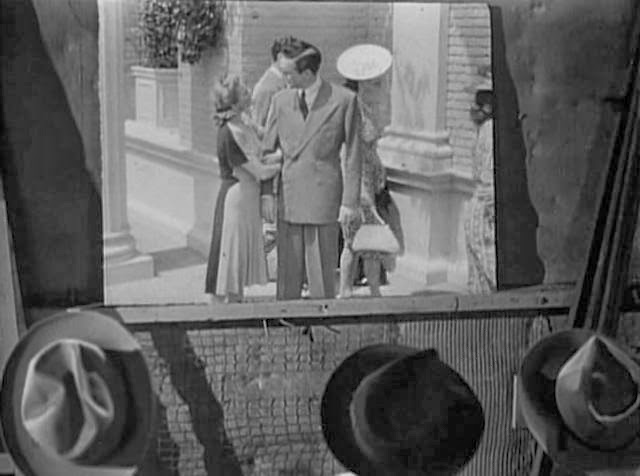 Sign me up for the "Hellzapoppin' is the Greatest Thing Ever" club.

I thought Busby Berkeley's 1943 The Gang's All Here was the glorious endpoint of the 1930s Hollywood/backstage musical form. But here Olsen & Johnson's deconstructo ad absurdum anticipates Berkeley's delirium by two years. While Berkeley plays it relatively straight, allowing the looney excess of his Technicolor musical sequences to finally overwhelm the bounds of their plot (and thus their apparent reason for existing), the zaniness of Carmen Miranda ultimately triumphing over the pale fragility of Alice Faye, Hellzapoppin' takes the musical apart piece by piece, mocking and discarding every constituent element of genre and film form itself, giving their own film (or rather, the plotline Universal actually insisted Olsen & Johnson include when adapting their stage show) the MST3K treatment ("Not another movie with a show in it" one of them sighs in regards to the show within the movie within the movie of their show) and leaving behind nothing but a smoking wreck of dancing girls and random surreality. It makes Gang's look like just another staid expression of a bankrupt corporate convention, like it starred Jeannette MacDonald or something.

This is the film I imagine many ex-vaudvillians wanted to make upon their arrival in Hollywood. Ole Olsen & Chic Johnson, though, don't merely serve as sideline agents of chaos as the neutered Marx Brothers do in their MGM films, instead they're the ringmasters, with the silly triteness of the imposed love story put in its proper place. Buster Keaton might have accomplished this in Free and Easy or Speak Easily but was too lazy, too powerless or too drunk (or some combination thereof) to make the destruction of pallid entertainment the centerpiece of his film, content to let the screenwriting Elisha Cook's of the world have their soul-crushing way with cinema. WC Fields might have come the closest, in moving his muttering asides to the center of his escalatingly bizarre stories, but I haven't seen enough of his work to say for sure. 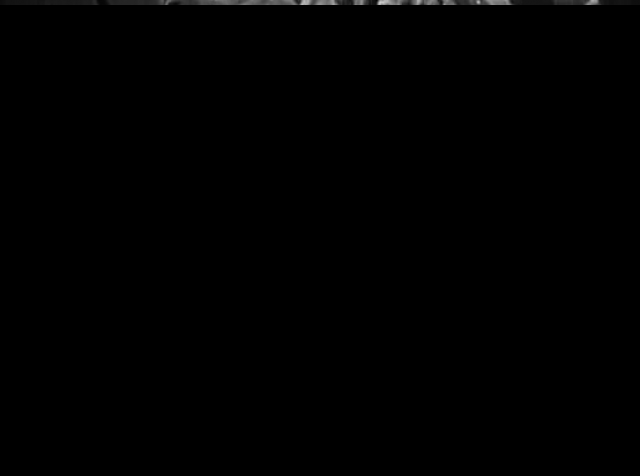 I have never seen Olsen or Johnson in anything before, so I have no idea if this is typical for them. I've seen a couple of director HC Potter's other films, neither of which seem remotely like this one: while amiable, the Cary Grant vehicle Mr. Blandings Builds His Dreamhouse never reaches the absurd heights it seems destined for (instead settling for a drawn-out, much less fun variation on Keaton's One Week) and The Shopworn Angel is a very solid, undermentioned World War I melodrama with Margaret Sullavan and James Stewart, most memorable for the performances of those two great actors. The supporting cast of Hellzapoppin' does include some familiar faces: Martha Raye (almost as volcanic as her performance in Chaplin's Monsieur Verdoux) as a man-hungry actress; Mischa Auer as her target, an apparent refugee from Lubitsch's continental comedies; and Shemp Howard as the greatest depiction of a movie theatre projectionist in the history of film (yes, even better than Sherlock Jr, which would make a great double feature with this, with Chuck Jones's Duck Amuck played in-between). There are some terrific musical sequences, including a water ballet that anticipates George Sidney's work with Esther Williams (as in the sublime weird Jupiter's Darling), another poolside number that brings to mind Jane Russell's celebration of the male body in Gentlemen Prefer Blondes, and a remarkable all-black Lindy Hop number that builds from an impromptu jam session to some of the most exuberant and physically exhausting group choreography I've ever seen on film.

Apparently due to copyright issues stemming from the stage production, the film is not in print on DVD in the US. Appropriately so, as something this subversive should only exist in a kind of samizdat form, something those on the margins sneak around on gray market DVDs, or pass from download to download in the more piratical corners of cinephilia. I, of course, rented it at Scarecrow Video, which has two copies available. 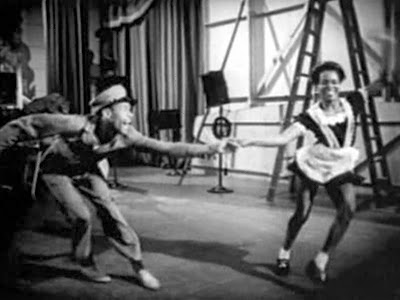