On My Darling Clementine 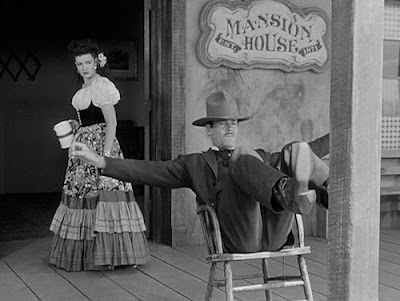 Not a perfect film, but there are a lot of perfect things in it. As such it's a perfect example of Ford's tendency to let the small, plot-unrelated moments take over his films. And thus a simple, largely fact-free story about a legendary event becomes a film about bringing civilization to the barbaric west, about building a church and brushing up your Shakespeare.

It's not really about the Earp boys as a family: while Wyatt gets most of the screen time, Morgan and Virgil fade to the background and the less said about James the better. It's certainly not about the Clantons, whose motivations are unclear (why don't they just let the Earps pass through?) and who seem to exist merely as an embodiment of the brutal crudity of the lawless West.

It's almost about Doc Holliday, the Eastern doctor who moved West out of despair and finds himself caught between two women who love him: the pure white lady from Boston and the mixed race saloon girl. Doc isn't so much a character as he is a collection of self-destructive urges. He's is the East in the process of immolating itself in the desert. But as a protagonist he remains slippery. 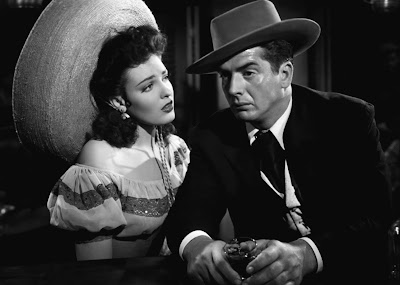 That leaves us with Wyatt Earp, a man Ford knew personally when he was young and Earp was old and both were in Hollywood. Fonda plays him as a superheroic figure: always one step of ahead of everyone else, patiently gathering evidence before enacting legal revenge against the men who killed his brother and stole his cattle. As this heroic figure, Wyatt is ostensibly meant to be viewed as admirable, and in most respects he is. But he also embodies all the racist sentiment in the film. It's Wyatt who enforces the explicitly racial contrast between the two women who love Doc (he threatens to send Linda Darnell's Chihuahua "back to the Apache Reservation, where you belong" while he fawns over Cathy Downs's purity as Clementine), and in an early sequence he establishes his lawman competence by chasing a drunk Indian out of town ("What kind of a town is this, giving liquor to Indians?" he asks, exasperated). For this reason, the film could easily be read as a racist expression by Ford.

But John Ford is a complicated man. Just because Ford depicts Wyatt as racist does not mean Ford himself is racist. Come to think of it, Ford's characterization of Wyatt's racial views is likely the most historically accurate thing about the film. That doesn't mean he endorses them, but in all other respects Wyatt is depicted as virtuous and heroic, the ideal individualist Western hero. Ford would better complicate these men in later films. As it is, Ford's Wyatt is an unsteady blend of noble and repugnant. His best quality is Fonda's awkwardness. 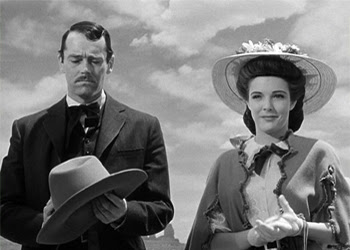 But also, there's this:

The shadows. This is probably Ford's most Expressionist Western, with darkness dominant and the characters, even the supposed hero Earps, often finding themselves in silhouette, or simply blacked out the by the absence of light. Ford could tend to let his Expressionist side run wild, as in The Informer or The Long Voyage Home, but this is a good middle ground between those experiments and the more restrained visions of Stagecoach and Fort Apache, and a far cry from the flat interiors of Liberty Valance.

Henry Fonda's two dances: the balancing act on the chair, and his goofy church dance with Clementine, his mouth wide in a grin of pure happiness. Contrast with the regimental formality of the dance in Fort Apache, where Fonda's Col. Thursday daren't crack a smile. 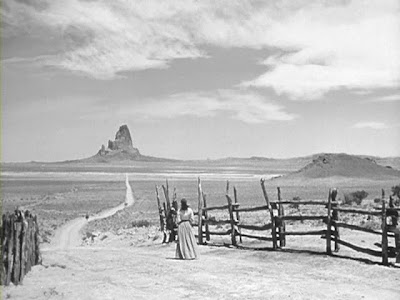