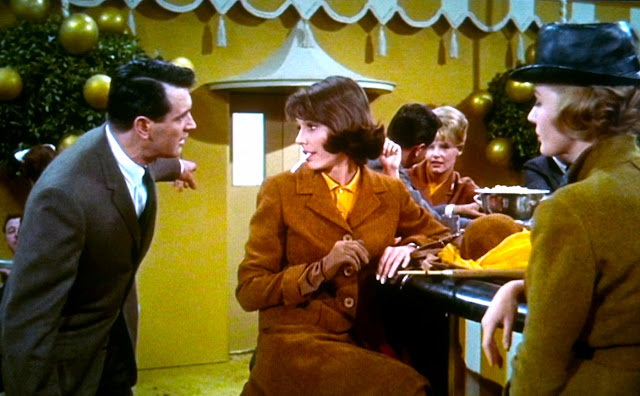 Late Howard Hawks reworking Bringing Up Baby with the relaxed, mellow episodic pace of Hatari!.  In other words, pretty much perfect.  Rock Hudson plays the Cary Grant part (Grant turned it down because he thought he was too old) and he's much better than I expected.  It's uncanny at time how much he looks like the 1930s Grant (with a little bit of Kyle Chandler mixed in) and shows a surprising flair for physical comedy, both in an amazing early sequence with a car half his size and later as he repeatedly pratfalls into a lake.  Paula Prentiss plays the screwball heroine, and she's equal parts Mary Tyler Moore and Jane Fonda, very pretty and charming, if not quite as ideal the Hawks heroine as Angie Dickinson in Rio Bravo.  This being late Hawks, it lacks the wild incandescent energy of Baby or His Girl Friday.  It's a slow-motion screwball, not because Hawks can't get it up to 99 MPH anymore, but because in old age he's simply no longer in a hurry.
Posted by Sean Gilman at 3:30 PM