On Vincente Minnelli's Tea and Sympathy

Vincente Minnelli's 1956 adaptation of the play Tea and Sympathy by Robert Anderson necessitated a few changes in order to make it past Hollywood censors.  As a result, the film is often derided as a watered down version of the original, another casualty of a culture that sought to systematically tame the daring and provocative in the name of of bourgeois morality.  On the contrary, I think the film as is is much superior to the play, that the censor-forced changes Minnelli and Anderson made make the film a simultaneously broader and deeper work, with a more nuanced view of human sexuality and relationships.  The film as Minnelli made it is one of the great melodramas of the 1950s, and one of the key works in this brilliant director's career.

This synopsis from the questionably named All Movie Guide provides a reasonable example of the general attitude toward the film, as well as a decent summary of the plot:


1956's Tea and Sympathy is a diluted filmization of Robert Anderson's Broadway play. The original production was considered quite daring in its attitudes towards homosexuality (both actual and alleged) and marital infidelity; the film softpedals these elements, as much by adding to the text as by subtracting from it. John Kerr (Tom) plays a sensitive college student who prefers the arts to sports; as such, he is ridiculed as a "sissy" by his classmates and hounded mercilessly by his macho-obsessed father Edward Andrews. Only student Darryl Hickman treats Kerr with any decency, perceiving that being different is not the same as being effeminate. Deborah Kerr (Laura), the wife of testosterone-driven housemaster Leif Erickson, likewise does her best to understand rather than condemn John for his "strangeness." Desperate to prove his manhood, John is about to visit town trollop Norma Crane. Though nothing really happens, the girl cries "rape!" Both John's father and Deborah's husband adopt a thick-eared "Boys will be boys" attitude, which only exacerbates John's insecurities. Feeling pity for John and at the same time resenting her own husband's boorishness, Deborah offers her own body to the mixed-up boy. "When you speak of this in future years...and you will...be kind." With this classic closing line, the original stage production of Tea and Sympathy came to an end. Fearing censorship interference, MGM insisted upon a stupid epilogue, indicating that Deborah Kerr deeply regretted her "wrong" behavior.


The changes from the original play occur mainly at the beginning and end of the film.  In the beginning of the play, the event that touches off the bullying Tom receives is that he's caught swimming naked with a (male) teacher.  The teacher is fired and Tom becomes an assumed homosexual and his every action (the way he walks, the way he cuts his hair, the music he listens to) is used as further evidence of his deviance.  In the film, the inciting incident is much less obvious, Tom is espied one afternoon sewing with Laura and some of the other older women, instead of playing sports and roughhousing with the other boys on the beach (the homoerotic elements of the "straight" boys' play is apparent but not emphasized, one of the many ironies Minnelli plays with in the film).  For this, he is taunted as "Sister Boy" for the remainder of the film, which follows the events of the play more or less closely until the end.  By making the inciting incident less sexual (sewing is hardly akin to skinny dipping), the film muddies up the question of Tom's homosexuality.  Indeed, for most of the film, it's unclear if Tom has any sexual inclinations one way or the other (or both). 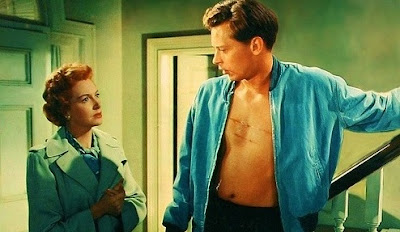 For Nathan Rabin, this makes the film a necessarily flawed work.  He writes at The AV Club:


Simultaneously bold and a cop-out, Tea And Sympathy is a film divided against itself, a drama about a young gay man’s awkward, fumbling initiation into the adult world of sexuality that doesn’t have the courage to embrace its destiny as a groundbreaking queer film. (Unsurprisingly, the film features prominently in the stellar film and book The Celluloid Closet.) Yet this subtext makes the film even more poignant during its many subdued scenes where John and Deborah Kerr talk around what they’re really feeling because they can’t come right out and say what’s on their minds. Like the film’s troubled protagonist, Minnelli simply made the best out of an impossible situation with this flawed, fascinating time capsule.


On the contrary, the film as is is not a failed attempt at a "groundbreaking queer film", but rather it is queerer than Rabin realizes.  For queer doesn't simply mean "homosexual", but rather a rejection of the dominant image of sexuality, that of the middle class heterosexual masculinity of the 1950s which was seen as the only viable option for a man to be a productive member of society.  Minnelli has taken a play that appears to be about sex (gay kid gets teased, may sleep with Deborah Kerr) to one about sexual identity and its relation to social codes.  In the film, there's every reason to believe that Tom is gay, but he's just as likely to be a straight kid who just happens to like to sew and listen to classical music, or even a straight kid who doesn't like sewing at all, but is just pretending to so he can hang out with the older woman he's passionately in love with.  Or all of the above.  The point is that none of those things (sewing, classical music, Deborah Kerr) prove anything definitive about Tom. 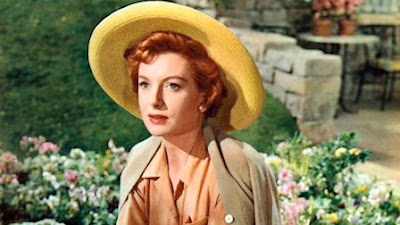 Tom's relationship with Laura is highly ambiguous: he may see her as a friend, another lonely person who needs someone to talk to (Laura's husband is cold and distant towards her, and is explicitly identified throughout the film with Tom, especially in his youthful love of classical music (to which he regresses in the end) and the bullying he received when he was Tom's age for that non-conformity, thus her husband can be read as a homosexual who has been closeted since his late teens); a mother figure (Tom's own mother abandoned the family when he was very young, Laura throughout the film is wearing earth tones, greens and yellows (Tom always wears light blue: powder blue for his effeminacy or baby blue because he has not yet matured into a proper man) and Tom first sees her in her garden and their sexual encounter takes place in an Edenic, womblike forest (in the play, it takes place in Tom's dorm room, I believe), Minnelli thus identifies her with Nature, whether that is Mother Nature, or a comment on her effect on Tom's true nature (fulfilling it if he's straight or repressing it if he's gay) is undetermined); or a potential lover (this is apparently what Laura believes: he is acting strange because of his burning unrequited passion for her, by sleeping with him, Laura is helping Tom "become a man" in the sense of maturation, not repression).

The film's epilogue settles none of this.  Here, Tom receives a letter Laura has written him after confessing her infidelity to her husband.  The husband is wrecked and alone (listening to classical music), Laura is apparently also alone, and Tom is a successful writer, married with children.  Suffice it to say, being married and having children in the 1950s says very little about one's "true" sexual orientation, so even this tacked on, mandated-by-censors ending solves none of the ambiguities Minnelli has opened up.  Far from dividing the film against itself, the epilogue concludes the film in the same variable state the rest of the film has occupied.

The film rejects the idea that Tom can be defined by any of the usual methods we use to identify someone as "gay" or "straight" and in so doing undermines the very idea that people in general can be so defined.  The truth is, we don't know anything about Tom's inner life, all we ever see are outward manifestations that we then choose to interpret one way or the other.  By making those outward clues more ambiguous and potentially contradictory than they are in the play, the film opens up more possibilities for Tom's sexuality, and forces us to consider whether he really is gay or not, and what it is that makes us think so and why.  Thus the film, instead of being merely an admirably pro-gay melodrama is instead a deeply subversive work, one that undermines not only homophobia, but all of our assumptions about what it means to be a "man" (non-biologically speaking, of course) as well as the very idea that we should have such definitions to begin with.  It's a wholesale rejection of heteronormativity in the name of non-definitional ambiguity.

Thematically, this ties in with a recurring strain in Minnelli's films, one that it is very tempting to read as autobiographical (though we should probably refrain from such things).  That is the story of an artist's struggle to fit into or escape from a constricting social environment.  Tom's ambition in life is to become a folk singer (very prescient for a film from 1956, a full five years before Dylan showed up in the Village).  He also reads poetry, likes to listen to classical music, and by the end of the film has become a writer.  His troubles in school arise largely because his artistic inclinations are read as "gay" by the other kids at school (as well as his father).  The film is therefore not only about a sexually ambiguous man struggling against social mores, but also about a society that reads "art" as "deviance" and attempts to repress its manifestations.  Tom therefore joins other Minnelli heroes like Tootie in Meet Me in St. Louis, Manuela and Serafin in The Pirate, Jerry in An American in Paris, Van Gogh in Lust for Life and Dave in Some Came Running (along with many others) as artists trying to remake the world to match their vision of it, despite all the pressures of social obligation and expectation weighing them down, repressing them.  The results aren't always the same: in Minnelli's dramas, the artist usually fails and ends in tragedy (Tom can be read as either fully closeted or finally free); in the musicals, the artists usually triumph -- after all, what is a musical if not a fundamental subversion of restrictive social codes (it is highly improper to just start singing and dancing whenever you feel like it).  The conflict is uniquely sexualized in Tea and Sympathy, but Minnelli's goal, and his hero's, remains the same: the breaking down of normalcy in the name of a freer, more open world full of possibilities. 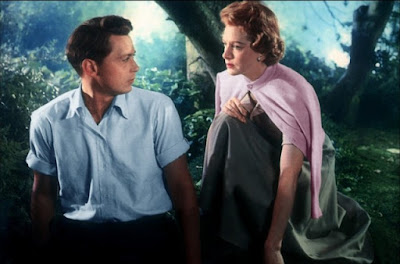