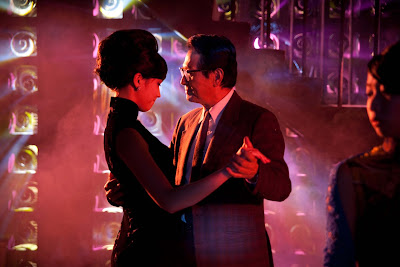 The Drunkard - Freddie Wong's debut film is an adaptation of one of the most famous modern Chinese novels, written by Liu Yichang.  In early 60s Hong Kong, a struggling writer juggles his declining career prospects (he goes from Hemingway ambitions through martial arts novels and screenplays to pornography), various women (a landlord's 17 year old daughter, a couple of prostitutes, old and young, an elderly landlady played by Wei Wei, the star of the 1948 classic Spring in a Small Town) and copious amounts of alcohol.  Wong Kar-wai's In the Mood for Love and 2046 are somewhat based on similar characters, though his films are so infused with his own obsessions that it'd be a stretch to call them adaptations.  That the film was made for a mere $500,000 is remarkable, though it does explain the intimacy of the cinematography: almost always medium to close shots of small interiors.  The nightclub scenes have the Christmas tree red glow you'd expect, but there's nothing glamorous about the writer's alcoholism.  Neither is it ever reduced to any kind of social problem picture preachiness: he drinks and he writes, but not necessarily in that order.  John Chang (the father of Chang Chen, star of Crouching Tiger, Hidden Dragon) is terrific in the lead role, nowhere near as debonair as Tony Leung in the Wong films, he brings a weary reality to every scene. 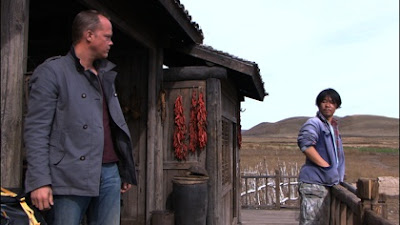 Thomas Mao - Inspired by the unusual friendship between his friends Mao Yan and Thomas Rohdewald (Mao is a famous oil painter who has used Thomas as a subject dozens of times, the paintings, which appear at the end of the film, are very interesting and very creepy) Zhu Wen's film is a whimsical exploration of what Mao and Thomas might have been like had they met in other lives.  In the main story, Thomas is a traveling painter who spends a few days at Mao's inn.  Thomas doesn't speak Chinese and Mao doesn't speak English, and the two find various funny ways of miscommunicating.  Appearing to each of them are also what appear to be ghosts of medieval warriors, a woman in black and a man in white.  There's a stunningly choreographed fight/dance sequence between these two, that's the visual highlight of a very beautiful film.  Eventually, there's aliens and some snow.  But the most surprising part of the film is a coda set in an art gallery, where Thomas and Mao hang out and various elements from the main story recur in unexpected ways.  It works like a funhouse mirror, folding the narrative back on itself. 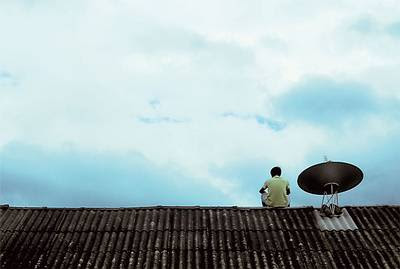 Crossing the Mountain - Vancouver may not have gotten Jean-Luc Godard's Film Socialisme, but we're not wholly bereft of intentionally partially-subtitled avant-grade narrative films.  Yang Rui's opaque film, photographed in sharply focused, long-take HD, is set in Yunnan, along the Burmese border, the people here speak a local language, and she has chosen to only subtitle the "important" parts of the dialogue, even for the Chinese-speaking audience.  Mostly a set of discrete, seemingly plotless episodes that are nonetheless pregnant with possibly meaningful images and juxtapositions, with more or less the same set of characters for most of the film who inexplicably disappear in the later sections (though we may have some clues at to their fate).  It might be about the dangers of unexploded ordinance in Southeast Asia (still a problem, even in areas where the wars have been over for 30 years), but more than that it's about living in a collision between past and present.  The film is set in land that once belonged to a people that until quite recently practiced human sacrifice as agricultural aid (where these people are now, we can't say, but assume they have merged with the general population), where kids try to watch TV and play karaoke video games (though the technology never seems to work properly) and old people pass the time with folk dances that look not unlike the Hokey-Pokey.  Basically, it's an impossible film to describe, and apparently quite difficult to sit through.  Despite a warning from programmer Shelly Kraicer about the film's difficulty and the need for patience with it, about the third of the audience walked out.  I was glad to stay through the end.  While it wasn't the best thing I've seen at the festival thus far, I certainly haven't seen anything quite like it.
Posted by Sean Gilman at 4:07 PM