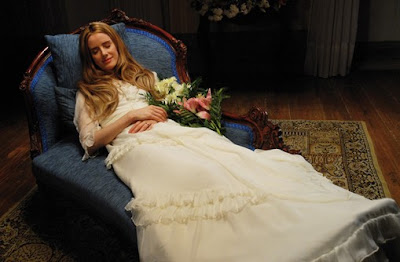 The Strange Case of Angelica - Eccentricities of a Blond-Hair Girl was one of my favorites at last year's festival, and while this year's Manoel de Oliveira film isn't as gemlike as that one, it's still pretty good.  A young man who dabbles in photography is called upon to take the picture of the recently deceased Angelica, who has the unfortunate habit of smiling at him when she's supposed to be dead.  Both her corpse and later her image appear to move, and when she takes a ghostlike form (taking Isaac on a flight more than a little reminiscent of Superman and Lois Lane), Isaac falls in crazy obsessive love with her.  In the middle of the film, there's what appears to be an attempt to explain all of this with quantum physics and antimatter, but it doesn't make a whole lot of sense.  But then again, neither do the religious explanations (Isaac keeps repeating some lines about angels before and after meeting Angelica).  While Eccentricities was a perfect little anecdote about love gone wrong, this is a much more mysterious, weird and even goofy film.  The best part about it is also one of the best things about Eccentricities: both films seem to exist in technology, environment and social habits in a world that isn't quite the present, nor is it the past.  They're not so much outside of time, but take place across the span of the whole of the 20th Century at once. 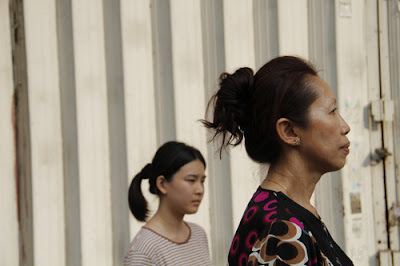 The Tiger Factory - We saw director Woo Ming Jin's Woman on Fire Looks for Water earlier this year at the San Francisco International Film Festival, and I thought it was promising, a quirky minimalist film with some nice camerawork and a good sense of place.  So I was looking forward to this, Woo's next film.  I wasn't prepared, however, for it to be so totally unlike that other film, with a deadly serious verite-realist style instead of long takes and quasi-mystical goofiness.  About all they have in common is the Malaysian setting and long sequences of people at work (catching, sorting and cleaning fish and shellfish in the first, inseminating pigs in this one).  Lai Fooi Mun plays Ping, who wants to quit her three jobs (pig farm, restaurant and surrogate mom for her aunt's baby factory) and get herself smuggling into Japan, apparently so she can advance to the world of foreign prostitution.  Her aunt keeps her poor and pregnant, steals her kid and her money and is pretty much the most evil person ever.  Ping has a friend and roommate at the beginning of the film, but by the end the friend has made it to Japan and is, for some reason, no longer returning Ping's phone calls.  The girl's life sucks and there's no possible way out of it.  This would be more moving if Ping had any kind of personality or spark.  But by the time the film has begun, her horrible life has already beaten her done to the point of near-mute passivity (when her various money-making plans go awry, she mopes and comes up with even dumber schemes).  Basically, it's like Chop Shop without the charm, energy or hope.  The film was paired with a short called Inhalation featuring some of the same actors in a slight variation on the same story by Edmund Yeo, the co-writer and producer of The Tiger Factory.  I liked the short a lot better, both for its style (there's a cool long pan that doubles as a 38 day time jump) and its tone (Ping has a friend, and they talk like real people!).  It'd go better at the end of the feature than the beginning (the way it was programmed). 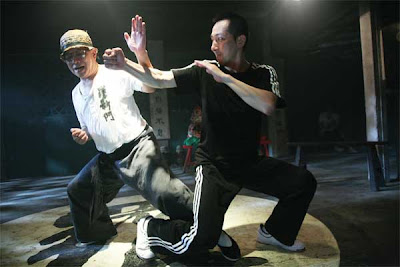 Gallants - A comical kung fu film from the directing team of Clement Cheng and Derek Kwok that unites some elderly Shaw Brothers stars in a funny and moving elegy to old age and the martial arts classics of the 1970s.  Skinny and clumsy real estate agent Cheung is sent to a small town to facilitate the sale of a local teahouse that happens also to be a former kung fu gym.  The two owners (Dragon and Tiger) are the last surviving disciples of their coma-striken master.  Bad guys (who want to buy the teahouse at a deflated price) attack, the master wakes up and everyone learns kung fu for the big local tournament.  Dragon is played by Chen Kuan-tai (Crippled Avengers, Executioners from Shaolin) and Tiger by Leung Siu-lung (Legend of the Condor Heroes, Kung Fu Hustle) and both are still outstanding in the action sequences, if not the greatest actors in the world.  Teddy Robin, a Hong Kong rock star in the 60s, plays their master as a mix of Yoda and Tracy Morgan, he's by far the best part of the film (and even did the music as well).  The film isn't nearly as polished as the later Stephen Chow films, though it's often just as funny and shares the same anarchic spirit.  The quickie vibe (if I remember the Q & A correctly, they shot the whole thing in only 18 days, which is ridiculous) only makes it more fun.
Posted by Sean Gilman at 5:35 PM