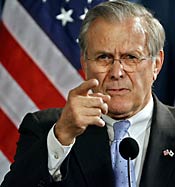 Not much time for Not Blogging lately, what with crazy Borat business sucking all the life out of me at work (the movie's great, by the way. Number 3 on the year so far, after Miami Vice and The Departed.) In addition, i went out and bought the new Final fantasy game, beginning my twice yearly video game binge, so i haven't been watching any movies at all.

Some interesting stuff going on however. There was the election, of course. And let me sum up my reaction this way: YIPPEE! But I'm still concerned for the future. I anticipate a Clinton-Obama ticket that will probably lose to McCain-Jeb or something. Could be worse, I guess.

David Bordwell's got his book on Yasujiro Ozu, Ozu and The Poetics Of Cinema available for download here. I haven't read it yet, but Bordwell's legit so I imagine it's pretty good. And Ozu's always fascinating.

Mike's got an interesting post at Vinyl Is Heavy about a Wired magazine article on Atheism and sad little anti-prayer atheist groups contrasted with lively Protestant gatherings. It's an interesting subject, but ultimately my opinion on the whole atheism vs. theism debate is that it doesn't make a bit of difference whether or not God exists. I have my doubts, but I don't particularly care. Nor do I really have any interesting in convincing people that what they choose to believe is wrong. People look for all kinds of things to give their lives meaning, to experience some combination of community and transcendence: church, sports, art, atheism groups, whatever. If it works for them, I'm happy for them. Though it's easy to see, without looking too hard, that not much is really sacred.

All religions are made up of a morality and a mythology. One doesn't need to believe the myth to agree with the moral: you can have the Golden Rule without the Trinity. The mythologies of various religions are fascinating though, not just in a psychological Carl Jung/Joseph Campbell sense, but also because all of Western Art (music, literature, you name it.) is founded on Judeo-Christian mythology (same with Eastern Art and Religion, as far as I can tell as well). Whether we believe in it or not, much of the way we see and understand the world is shaped by religion and the discourses surrounding it. And the world is richer for having those myths and metaphors. You don't need to be Catholic to appreciate Martin Scorsese, but you can't understand his work without understanding Catholicism. So this is the other problem with atheism as a doctrine: a world without religion is much less interesting, we lose many of our most versatile and powerful metaphors. Cinema would be a much poorer place without The Seventh Seal, The Passion Of Jeanne D'Arc, Andrei Rublev, The Last Temptation Of Christ, Au Hasard Balthasar, The Mission and on and on and on.

The problem with religion is not people who believe the myth and the morality, but with people who believe the myth and ignore the morality. This is the basic error in fundamentalist thinking, Christian, Jewish and Muslim. It's caused, not by religion itself, but by our woeful ability to think critically about ourselves and our world. Bertrand Russell, and many other atheists blame religion itself for this, as organized religion (they assert) discourages doubt and questioning in father of received wisdom and dogma. I can't disagree with that, but it's a chicken and egg thing. The fact is that less dogmatic religions have just as much trouble with authoritarianism and lack of self-examination as Western nations have seems to be evidence that the problem lies not with God but with ourselves. It's that longing for community again, making it so easy for us to sublimate our own judgment to the instruction of charismatic leaders. Is it religion that makes us ripe for exploitation by authoritarians, or our need for community that makes us accept so willingly whatever we're told religion demands of us? I don't know, and neither did Russell or any other group, prayer or anti-prayer.
Posted by Sean Gilman at 2:20 AM