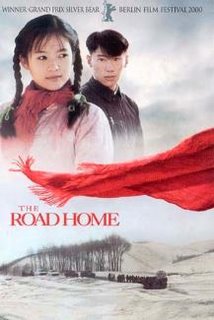 The Road Home - Favorite Actress Zhang Ziyi's debut film is this Zhang Yimou film. Beginning in grainy black and white, a young man returns to his small village on the occasion of his father's death. As he and his mother make funeral arrangements, we get the story of his parents' relationship. Zhang plays the mother as a young peasant girl who becomes enamored (kind of obsessed, really) with the local teacher. It's a love story told in small gestures and quiet rituals, filmed in the kind of beautifully tasteful color cinematography you expect (and I love) from Zhang Yimou. Speaking of Zhang and Zhang, Senses Of Cinema has an interesting, comprehensive and somewhat confusing article on House Of Flying Daggers, Hero and Crouching Tiger, Hidden Dragon. I think he's too hard (and literal) in his criticism of Crouching Tiger (nihilism), but his complaints about Hero (fascism) are basically the same as mine. The #8 film of 1999.

Meet Me In St. Louis - Vincente Minelli's musical ode to turn of the century small town America stars Judy Garland and Margaret O'Brien as two of several daughters of an uppers class STL family that may be moving to New York. It's a very competent and largely inoffensive film, but aside from a number or two (Have Yourself A Merry Little Christmas, The Trolly Song) it's not anything that I find particularly interesting. I'm generally a fan of dancing, as opposed to singing musicals, so that's part of the problem (I like dancing musicals for the same reason I like kung fu films, by the way). But really, the film's just so archetypal that it's impossible to watch it today with fresh eyes.

The Heart Of The World - This short film by Winnipeg-based director Guy Maddin is one of the most vibrant, energetic and fascinating six minutes in the history of film. It's an entire sci-fi epic on fast-forward, told in a winking homage to the montage-heavy Russian silent films. A girl, a scientist is in love with two brothers, one an actor (playing Jesus is the Passion Play), the other an undertaker. When she discovers that the world's about to end (have a heart attack), the world falls into chaos and she falls for an evil industrialist. But she comes to her senses and saves the world. Any summary, certainly this one, is inadequate to describe this amazing film, the #3 film of 2000. Best to just watch it for yourself:

Archangel - Speaking of Guy Maddin, the only feature film of his I've seen is this 1990 film, a perplexing mix of Silent Cinema and campy/arty sci-fi horror. Set at the end of World War I, or so, the film revolves around a number of people with memory problems, who can't seem to remember who they or anyone else is. As imdb effectively summarizes: "(one-legged Lt. John) Boles loves Iris, who is dead, and meets Veronkha, whom he mistakes for Iris. But Veronkha is already married to Philbin, who forgets he is married to Veronkha. Veronkha thinks Boles is Philbin. . . ." There's also a peasant family, with a cowardly father and a mother who falls in love with the aforementioned Lt. Boles. When the family is attacked in the middle of the night by cannibalistic Bolsheviks, the father saves the son's life with the greatest intertitle I've ever seen in a film: "Strangled! By an intestine!" The #6 film of 1990. 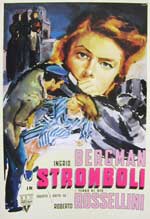 Stromboli - My first Roberto Rossellini film stars Ingrid Bergman as a WW2 refugee who marries a young Italian man to escape the refugee camp. The young man takes her to his home island of Stromboli, a conservative little village dominated by an active volcano. The volcano metaphor isn't exactly subtle, but neither is Bergman's performance as she becomes increasingly hysterical in her struggle against the provincialism of small-town life. But somehow, teetering on the edge of camp, it manages to be sincere and moving. I definitely need to see more Rossellini: I've had Open City on the tivo for months now. . . .

Queen Christina - Greta Garbo playing a cross-dressing Swedish monarch? Yee-haw! This potentially great film gets off to a great start, with Garbo's Queen picking up a guy in a bar, this first third of the film falling somewhere between Henry V and The Crying Game. The rest of the film, unfortunately, becomes a rather dull story of class differences keeping the poor Queen and her lover apart. Competently directed by Rouben Mamoulian, with John Gilbert ineffective as the Queen's boyfriend, but Garbo's as amazing as ever.

The Departed - Martin Scorsese's latest film is an adaptation of the very good Hong Kong film Infernal Affairs (#6, 2002). It's quite different from the earlier film, both in length (much longer), tone (much funnier), and style (much more freewheeling, especially in the performances). It's Scorsese's best film in a long time, since Kundun at least. Matt Damon plays a gangster who goes undercover as a cop and Leonardo DiCaprio plays a cop who goes undercover as a gangster. Both are drawn to the head gangster of South Boston, played by Jack Nicholson (in a performance that starts restrained and becomes weirder and more "Jack" as the film's sense of paranoid hysteria increases), and both have legit cops as potential father figures: DiCaprio has the ideal good father in Martin Sheen, Damon has amoral (and hilarious) company man Alec Baldwin, in a less frightening variation on his great Glengarry Glen Ross performance. And both Damon and DiCaprio (in a sharp break from the original) fall in love with a psychiatrist, played adequately by Vera Farmiga. 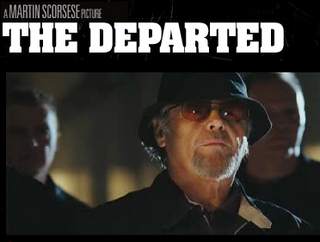 The film it most reminds me of is Hitchcock's North By Northwest. It has the same kind of combination of dark humor (especially from Baldwin and Marky Mark Wahlberg's ill-tempered cop), suspense and hidden potential depth. It's much more entertaining than the original, though (despite an overlong middle section of Leo coming unglued) without nearly the depth of character or emotion. Any depth The Departed does have is therefore, like most of Hitchcock, not emotional but intellectual. In this way the two films are complementary instead of oppositional: I think they're both great and each is enhanced by the other.
Posted by Sean Gilman at 4:43 PM