Between Netflix and TCM, I've seen a bunch more Criterion films recently. Waiting for further trade deadline news and with The New World on the DVD player. 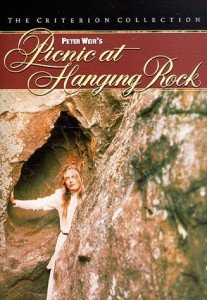 Picnic At Hanging Rock - The first big international success for Australian film is this Peter Weir film about 4 girls at the turn of the century who disappear during a school field trip to a geological oddity. There's no trace of the girls and 3 of them are never found. One does turn up, but has no memory of what happened. Many explanations have been given for what happened to the girls, but Weir wisely leaves the question unanswered, maybe. Possible solutions I've come across include: they were buried by a rockslide, they turned into animals, they spontaneously combusted because of Victorian sexual repression, the rocks ate them, and finally that they simply ceased being. I like that last one, since a person's biggest fear is that they will simply cease to exist, what could be scarier than a world in which people can simply blink out of existence? A beautiful, creepy, fascinating mystery. Weir's had an odd career since then, he directed: Gallipoli, Green Card, Dead Poets Scoiety, Witness, The Truman Show and Master And Commander.

Good Morning - Yasujiro Ozu's remake of his silent film I Was Born But. . . which I haven't seen. Like all Ozu films,
this is about the modern family and the way different generations interact. The story centers on two brothers who want their parents to buy the a TV set so the can watch Sumo matches. When their parents say no, the kids decide to stop speaking. The parents complain that TV is just meaningless babble, the kids have the same complaint about adults, with all their "Good mornings" and other small talk that conveys no real information. The film can be interpreted as an indictment of television, but I think Ozu's argument is instead that TV is just a new form of the activities humans develop to better get along and relate to one another. Like the meaningless chitchat that so annoys the kids, TV both brings people together and isolates them. It's a good first Ozu film to watch, it's a little faster paced than his better films, plus it's chock-full of fart jokes, which are always nice. 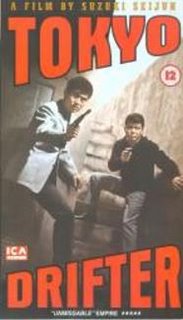 Tokyo Drifter - Highly stylized Japanese gangster movie by director Seijun Suzuki, whose Princess Raccoon (a fantasy musical starring Zhang ZiYi I bought last week but haven't watched yet). The plot seems more confusing than it really is: a top hit man tries to help his boss go legit, but a rival gang won't let them. The rivals foil the bosses plans and tries to instigate a new gang war by targeting the hit man. To protect his boss, the hit man leaves town and drifts from city to city with the bad guys on his trail. The film's opening sequence, with blinding white overexposed black and white scenes of the hitman being beat up and refusing to fight, appears to have been an influence on parts of Kill Bill. the rest of the film is in color, often with very sparse, geometrically interesting sets and strong color contrasts. For example, the final shootout is on an all-white stage with each of the gunmen dressed in black, running around after each other. The #5 film of 1966, just ahead of Woody Allen's What's Up, Tiger Lilly, which is very appropriate.

The Killers - The Criterion set has three different versions of films based on this Ernest Hemingway story, but I only watched the first one, a film noir directed by Robert Siodomak (the other two, a short by Andrei Tarkovsky and a feature by Don Siegel are on the other disc). The film stars Burt Lancaster as, The Swede (think Miller's Crossing) a former prizefighter who gets rubbed out by the eponymous hitmen. Edmund O'Brien is an insurance investigator who tries to figure out who killed The Swede and why. His investigation takes him through a series of Kane-esque flashbacks where we learn the story of he Swede's last few years, including his association with archetypal femme fatale Kitty Collins, played very well by Ava Gardner. It works terrifically as a noir, especially in the opening scene in a diner at night, with beautiful chiaroscuro photography, terrific menacing dialogue and a real sense of tension and menace. The film features one of the two Lancaster performances I actually like (the other being Field Of Dreams, naturally), and I liked O'Brien here a lot more than I did in DOA. 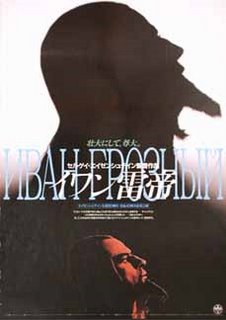 Ivan The Terrible Part 1 - The first half of Sergei Eisenstein's planned trilogy about the Tsar who unified Russia in the 16th Century. Eisenstein, you'll recall, was one of the foremost practitioners of dialectical montage, an editing technique whereby meaning is conveyed through the juxtaposition of different, often unrelated images, thesis + antithesis = synthesis, so to speak. His classic Battleship Potemkin is the textbook example of this technique (literally). But that film was in 1925 and this one was about 20 years later. By this time, Eisenstein had largely abandoned funky editing techniques in favor of more attention to composition and the interplay of light and shadow in the frame. Ivan The Terrible has much longer takes, much less editing than Potemkin, and even Alexander Nevsky, another of his great historical epics made just before World War 2 (Nevsky looks to be a middle ground between Potemkin and Ivan, more composed than one, but with a brilliant edited battle sequence as the film's high point). The film takes place almost entirely indoors, as Ivan is crowned Tsar but faces the distrust and hatred of the gentry that rules way too much of Russia. He's also surrounded by foreign enemies: Tartars in the east and south, Germans, Latvians and Livonians (a combination of Estonian and Lithuanian? or a whole separate people? I don't know) in the west and north. Plot is entirely secondary to the film though, it's basically just Ivan trying and largely failing to convince people to follow him by staring at them really hard. The acting is highly stylized silent movie acting, with big gestures and broad facial expressions that are very alienating for a modern audience and likely would have been to Russians in the 40s as well. But still, the film is about the compositions, and that alone is enough to make it a masterpiece. It's a non-stop barrage of fascinating, complex, creepy and even terrifying images. I'm very much looking forward to watching part 2.
Posted by Sean Gilman at 6:03 PM