Yet another terrific early 70s movie year, especially for foreign films, with some of the definitive films of world cinema in the decade released this year. 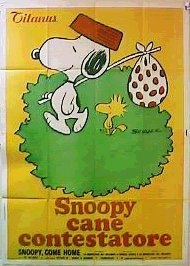 13. Shaft's Big Score - Another Shaft sequel, not quite as silly as Shaft In Africa, but still not particularly good.

12. Pink Flamingos - I'm shocked this movie is as old as it is. When I saw it years ago, I thought it was an indie movie from the early 80s. Anyway, it's John Waters's breakthrough film, a satire about, well, pretty much everything.

11. Snoopy Come Home - Another Peanuts film. Better than the Thanksgiving one, if only because they don't make kid's movies this depressing anymore.

10. The Man Of La Mancha - Musical version of Don Quixote starring Peter O'Toole. It's pretty good. Maybe significant for being one of the very last big Hollywood musicals. O'Toole didn't do his own singing, but Sophia Loren did. Director Arthur Hiller also did Love Story, Silver Streak and Taking Care Of Business.

9. Cabaret - Bob Fosse's surprisingly depressing film about a night club in Weimar Germany. It's kind of like Breakfast At Tiffany's, with Nazis. Liza Minelli and Joel Grey are excellent, but I don't recall much about Michael York's performance. 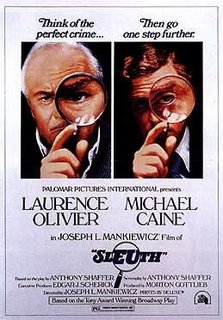 8. Sleuth - Laurence Olivier and Michael Caine are the only stars of this battle of wits as Olivier tries to get revenge on Caine for having an affair with his wife. It's the last film by Joseph L. Mankiewicz, who wrote and directed All About Eve, Julius Caesar, Guys And Dolls and Cleopatra. The writer, Anthony Shaffer also wrote Frenzy, The Wicker Man, the two big Agatha Christie movies and, uh, Sommersby.

7. Deliverence - Most famous for Dueling Banjos and "Squeal like a pig!", this is nonethelesss a remarkably effective thriller. John Boorman (Point Blank, Excalibur) directs an outstanding cast, which includes Burt Reynolds, Jon Voight, Ronny Cox and Ned Beatty. The story's pretty simple: a quartet of guys goes on a trip down a river, and humanity (in the loosest sense) and nature conspire to make it the worst vacation ever.

6. Play It Again, Sam - Woody Allen wrote and stars in this comedy about a Woody Allen character who falls in love =with his best friend's wife. To help him deal with this complex situation, Woody enlists the help of a hallucination of Humphrey Bogart from Casablanca. Diane Keaton and Tony Roberts costar, and Herbert Ross directed. Herbert Ross had quite a career: The Goodbye Girl, The Seven-Per-Cent Solution, Pennies From Heaven, Footloose, The Secret Of My Success, Steel Magnolias, My Blue Heaven and Boys On The Side. 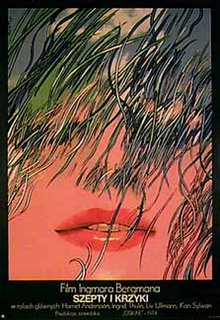 5. Cries And Whispers - The first Ingmar Bergman film to appear on any of my lists (I've only seen a couple others). This might be the most depressing movie I've ever seen. It's certainly in the top 10. It's a family drama about two sisters gathered together to watch over their dying third sister. There's a bunch of flashbacks wherein everyone is basically evil to everyone else. Liv Ullman, Harriet Anderson and Ingrid Thulin star. Great use of color.

4. Solaris - I called it an ode to solipsism and I'm sticking with that. It's still a great film though. I especially like the trick where the camera slowly pans in a circle and the people on screen move around behind it and show up in unexpected places. It surprises me every time he does it.

3. The Discreet Charm Of The Bourgeoisie - Luis Buñuel once made a movie about a group of people who are unable to leave the dinner table (The Exterminating Angel). This time, a group of Bourgeois are unable to actually eat a meal as they keep getting together and keep getting interrupted for various increasingly bizarre reasons. It feels like a summation of Buñuel's career, as he attempts to say everything he's been trying to say for years all at once. The great thing is that it's still pretty funny. He doesn't seem to have become as pessimistic as Kurosawa did with Ran (#1, 1985), so maybe it has more in common with Dreams (#3, 1990). 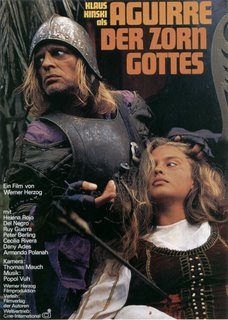 2. Aguire: The Wrath Of God - I finally got around to watching Fitzcarraldo a couple nights ago and I liked it a lot. In fact, it's now my #1 movie for 1982. As much as I liked it though, I like Aguirre better. Which is very strange for me. I generally don't prefer the darker, more depressing movie, and Aguirre is incredibly depressing. But it's just so damn weird that I don't get depressed, I just think it's really cool. Anyway, Klaus Kinski plays Aguirre, a 16th Century conquistador on a quest down a river for El Dorado. Aguirre, of course, is insane, and gradually everyone on the quest with him dies one way or another. Kinski is, as always, terrifying. And I can now say definitively that he absolutely did NOT play the villain in Ghostbusters II.

1. The Godfather - Yeah yeah. What did you expect? I have no fear of the obvious. It's overrated, in that it's most definitely not one of the 5 greatest movies ever made. But it's still ridiculously good. This and it's first sequel are, along with Marcel Carne's Children Of Paradise the best novelistic films I've ever seen. Massive films that create and immerse you in an entire world. Interesting fact: cabaret won more Oscars for 1972 than The Godfather did. Coppola lost best Director to Bob Fosse, and his film ended up only winning three awards: Best Actor (Brando), Adapted Screenplay and Best Picture. Cabaret won 8, including Joel Grey's Supporting Actor win over three (!) from The Godfather (Pacino, Duvall, and Caan).


Plenty of Unseen movies this year, including some pretty big ones. I started watching Last Tango In Paris once about 10 years ago, but I was really bored and turned it off. 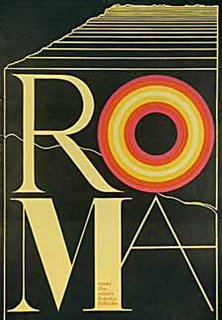 The Ruling Class
Roma
The Candidate
The Chinese Connection
Jeremiah Johnson
Everything You Always Wanted To Know About Sex, But Were Afraid To Ask
The Poseidon Adventure
Chloe In The Afternoon
Blacula
Lady Sings The Blues
The King Of Marvin Gardens
The Canterbury Tales
Boxcar Bertha
The Cowboys
Joe Kidd
The Life And Times Of Judge Roy Bean
Deep Throat
What's Up Doc?
The Getaway
Sounder
Posted by Sean Gilman at 3:30 PM