Running Out of Karma: A Better Tomorrow III: Love and Death in Saigon 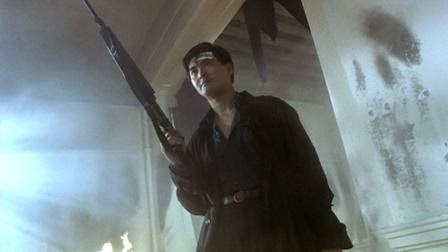 I don't know all the behind-the-scenes details about this, I'm not sure that anyone aside from Tsui Hark and John Woo really know for sure, but as I understand it the story is: following the breakout success of the Woo-directed and Tsui-produced 1986 film A Better Tomorrow, the two reunited a year later for a sequel. It was a very contentious shoot, with Woo walking off at some point and Tsui finishing the film. They worked together again on The Killer, but split for good during the early days of the making of A Better Tomorrow III, conceived as a prequel set during the Vietnam War. They both made their own version of the story, with Tsui's official sequel released in 1989 and Woo's coming out the next year as Bullet in the Head.

The first A Better Tomorrow, itself inspired by Lung Kong's 1967 Story of a Discharged Prisoner, tells of the friendship between two mid-level gangsters, Mark and Ho, played by Chow Yun-fat and Ti Lung, respectively, and Ho's policeman younger brother Kit, played by Leslie Cheung. It's a crime saga about the unbearable demands of loyalty and honor among thieves and family bonds both literal and metaphorical. It was wildly successful and vaulted Chow to superstardom. The sequel is a fascinating mess, it seems exactly like the work of two highly individualistic and independent creators who don't agree at all on what kind of film they're trying to make. To solve the problem that Chow's superstar killer Mark dies at the end of the first film, Tsui and Woo invent a heretofore unmentioned twin brother for him and shoehorn him into the plot. With wildly over-the-top comedy, melodrama and violence, it's 80s Hong Kong excess of the highest order. 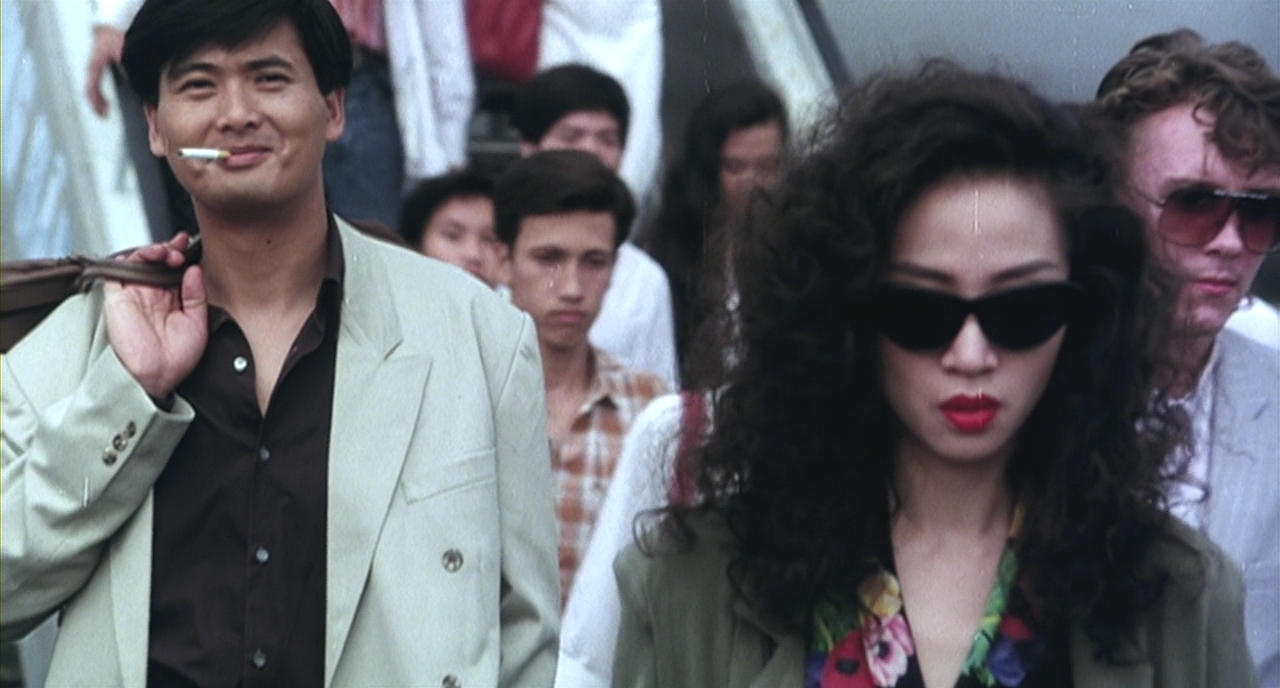 The third film is a prequel, which proves a much more reasonable and interesting way of getting Chow back into the story. Set in the final months of the Vietnam War, Mark travels to Saigon to help his cousin Mun (played by The Other Tony Leung) convince Mun's father to return with them to Hong Kong before the North wins the war. The father is played by Shek Kin, the villain in many a Kwan Tak-hing Wong Fei-hung serial and also in Bruce Lee's Enter the Dragon. This was one of his final films, although he lived to be 96, dying in 2009. As all of Mun's schemes for getting his father out involve criminal activity, he and Mark quickly become involved with a mysterious badass woman, played by Anita Mui, named Kit. At the point we meet him here, Mark is a regular guy, a poor shot and not particularly cool. But he's tough and resourceful and we see him slowly turn into the superhero of the first film, right down to the origin stories of his iconic wardrobe: Alain Delon sunglasses, black duster jacket and matchstick in his mouth (for the first half of the film, he dangles an unlit cigarette from his lips; as he becomes more aggressive it changes to a matchstick: his oral fixation progresses from the thing that is burnt to the thing that starts the fire).

As is inevitable, both men fall for Kit, a situation only complicated by the return of her long-lost boss-gangster boyfriend Ho. (Here is where I point out how weird these character names are: Ho and Kit, recall, being the names of Ti Lung and Leslie Cheung's characters in the first film. It's like this universe contains an infinite number of potential Marks (the spontaneously generating twin of the second film) but a very finite number of character names for those Marks to interact with). Things escalate, trips are made back and forth to Hong Kong, everyone gets shot to hell and it all ends on the last flight out of Saigon. 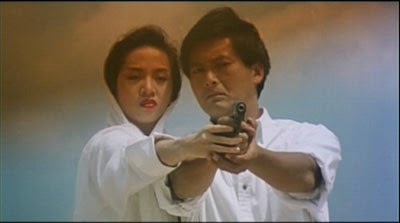 The differences between Tsui and Woo's versions of the same backstory are striking and varied. Most obviously is the presence of Mui, a strong female character, the smartest and most capable individual in the whole film by far, the likes of which is wholly absent from Woo's work. Compare her to Cherie Chung's marginalized woman in Once a Thief, the part of the heist trio (with Chow Yun-fat and Leslie Cheung) that stays home and does the housework for the boys, or Thandie Newton's Girl Spy in Peril in Mission: Impossible II, a film almost entirely derailed the moment she goes from interesting antihero to passive objective. Chow's Mark was the iconic figure of Hong Kong cinema in the late 80s, an icon so widespread you see its influence still in Jia Zhangke's Still Life 20 years later. But in Tsui's film, the person Mark idolizes, the person who teaches him to be cool is Anita Mui. Between this and the balanced approach Tsui gives to the woman's point of view in many of his romantic films (Working Class, The Lovers, Love in the Time of Twilight, Green Snake, etc) as well as the brilliant job he and Carina Lau do in re-envisioning the notorious Empress Wu in the Detective Dee films, I wonder if Tsui should be getting more credit for progressiveness in his depictions of women, especially relative to such macho directors as Woo, Sammo Hung, Jackie Chan, Ringo Lam, Wong Kar-wai and others of that generation. 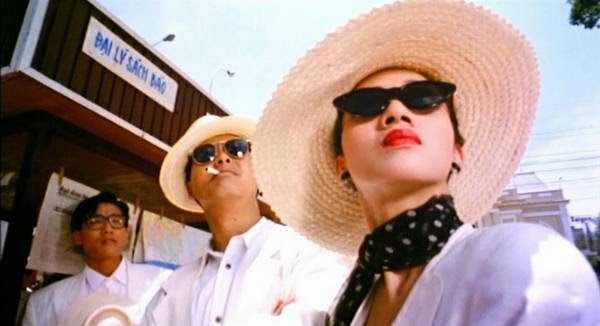 More than that though is the metaphysical difference in the films. Woo's "heroic bloodshed" films are about the codes of honor among men of action, with the tragedy coming from the ultimate incompatibility of those codes with the amorality of modern life in Hong Kong, as epitomized by his gangster villains, laissez-faire nihilists of the Randian variety that flourished in the latter days of Hong Kong's hyper-capitalist colonial life. This is all seen through a prism of Christian, specifically Catholic, iconography as his noble but doomed heroes sacrifice themselves for the sake of innocents. Bullet in the Head has much more in common with Michael Cimino's The Deer Hunter than it does with A Better Tomorrow III, though they're sourced in the same original screenplay. Tsui doesn't go in for grand statements about The State of Things, and sure as hell never puts anything into a religious context, Christian or otherwise. His heroes live in the same chaotic world as Woo's, but their losses aren't sacrifices, they're simply losses. Where Woo elevates everything he shows, with slow motion, melodramatic music and a seemingly endless supply of doves, Tsui drags us down to earth, down to the practical comedy and pragmatic horror of everyday life. The love triangle in Tsui's film isn't spiritual, it's mundane, and the conflict at its heart isn't between honor and dishonor, between heroes who follow a code and those who don't. Everyone in the film has essentially the same amount of honor: they're all crooks, to be sure, but no one's particularly vicious about it: it's not personal and not ideological; strictly business. Even Ho, the ostensible villain of the picture, isn't any worse a guy than Mark, he just happened to have loved Kit first, that's all.

That's not to say that Tsui's films aren't political, they most assuredly are. But what they aren't, at least relative to Woo's, are moralistic. Tsui began his career with a remarkable trio of punk anarchist films that, along with his fellows in the New Wave, turned Hong Kong cinema on its ear. As his career progressed, his films became more conventional, with wacky comedies, effects-driven extravaganzas, traditionalist martial arts films and lush romances. But that early spirit still lingers, in even his most mainstream films. If Woo is always reaching for something transcendent, something ineffable in his tales of sacrifice, Tsui is always knocking us down, urging us to see things as they really are, however absurd or inexplicable. Woo's heroes famously fire dozens of bullets without ever needing to reload, Tsui's are always finding that after a shot or two, their weapons are empty. 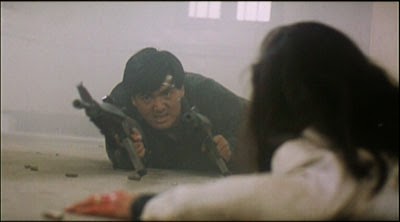